Russia and NATO agree not to return to Cold War era

The session of the foreign ministers of the Russia-NATO Council opened in Brussels on Thursday. Foreign ministers of 27 countries of the world took part in the meeting, including Russian Foreign Minister, Sergei Lavrov. Alexander Yakovenko, an official spokesman for the Russian Foreign Ministry, said that the meeting of the Russia-NATO Council was to give an additional incentive to perspective cooperation projects on the anti-terrorist struggle, first and foremost. 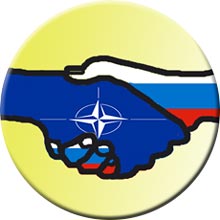 The agenda of the meeting included summarizing the results achieved during 2004, searching for perspective directions on cooperation, discussing and approving the Council's program for 2005. The new program is aimed at developing a political dialogue and the practical cooperation. Isabelle Francois, the Director of NATO's Information Office in Moscow, stated that the foreign ministers would sign the all-embracing plan of joint activities in the struggle against the international terrorism.

NATO Secretary General Jaap de Hoop Scheffer excluded a possibility to return to the Cold War era in connection with the political crisis in Ukraine: "While many in the media have attempted to portray these events as a return to Cold War-era confrontation between East and West, I am confident that we can prove them wrong," he said.

Russia and NATO called upon the feuding sides of the conflict to guarantee the free and fair election process in Ukraine. "We appealed to all parties to continue to avoid the use or instigation of violence, to refrain from intimidation of voters, and to work to ensure a free, fair electoral process that reflects the will of the Ukrainian people," the statement of the Russia-NATO meeting said.

The sides also confirmed their support of Ukraine's sovereignty, independence, democracy and the territorial integrity. Russia and NATO achieved a consensus regarding the situation in Ukraine, although it took the foreign ministers much time to agree upon the wording of the statement. NATO's secretary general confessed prior to the meeting that he had doubts about a possibility to find a common language with the Russian delegation as far as the Ukrainian crisis is concerned.

Nevertheless, the sides did everything possible to avoid a public confrontation, as it happened at a recent meeting of the Council of Foreign Ministers of the OSCE in Sofia.

According to the Russian Foreign Minister Sergei Lavrov the issues mentioned in the statement are extremely important, because instigations have taken place on numerous  occasions. “We hope that they will eventually stop,” the minister stated.

NATO Secretary General Jaap de Hoop Scheffer stated that the alliance considered Ukraine its partner. Scheffer said that the situation in Ukraine should not be considered as a fight between the East and the West.