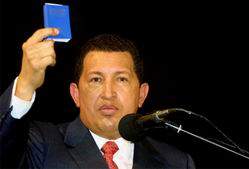 President Chavez tries to balance the power of the private media which has openly opposed him and supported attempts to break the constitution, including a failed coup in 2002.

A new media law passed by the Venezuela's National Parliament enters into force on Thursday, as President Hugo Chavez confirmed he has already approved it. According to the government, the new legislation is aimed to protect children from violence and sexual contents, while the opposition says it threats the press freedom.

All in all, the media law establishes strict rules regarding violence and sexual content, and allows the government to impose fines or temporary close down stations that break the rules. However, private media, controlled by local and international powerful corporations, angrily reacted to the new law and made presentation to the Organization of American States (OAS) and other human rights institutions.

On Monday, the president of the right-wing Miami based Inter American Press Society, Alejandro Miro Quesada, said during a visit to Caracas that rules banning "psychological" or physical violence between 7 a.m. to 11 p.m. were "traps" aimed to "muzzle informational content." Chavez denied Miro Quesada's statements, saying that IAPA officials were "lackeys of the imperialism who want to destroy our people."

Despite the local and international pressure, the bill, which was approved by congress in late November, becomes official with Chavez's signature and its publication Wednesday in the Official Gazette, a document that makes government decisions official. "We can say that the Venezuelan people have begun to free themselves from ... the dictatorship of the private media," Chavez said during a speech near midnight Tuesday.

Private media plays an open opposition role in Venezuela to the leftist rule of President Chavez. It openly supported at least two attempts to oust him by the use of force: during a failed militarist coup in April 2002 and a national lock out later that year. TV and radio stations, as well as most of the newspapers, also campaigned to vote for Chavez recall in a referendum in August.

Chavez has repeatedly accussed media tycoons of plotting against his rule and the “democratic revolution” his party leads. The President has also accused broadcasters of conspiring to topple him and "spreading lies" to ruin his image. Media executives, of course, deny the allegations.