USA to use new nuclear submarines to battle terrorism

The US Navy put into service a new submarine, which had been designed especially for the anti-terrorist struggle. It is noteworthy that the Soviet Union used to have a similar submarine: the 667A submarine was redesigned as a carrier sub, which was outfitted with two mini submarines in addition to torpedoes. The American submarine bears a certain resemblance to the Soviet sub as far as its objectives are concerned. 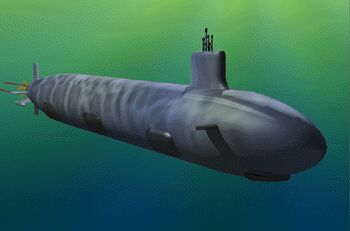 The official website of the Russian Ministry for Atomic Power said that the US submarine Virginia was evaluated at $2.2 billion. The sub differs from its analogues for its capability to navigate at a relatively small depth, which is an important aspect for anti-terrorist operations. The crew of the nuclear-powered 113-meter-long submarine counts 130 members.

The solemn ceremony took place at the largest US Navy base on the Atlantic coast in Norfolk, Virginia. The new $2.2 billion submarine was named in honor of the state.

The submarine was built by Northrop Grumman and General Dynamics corporations. Virginia is capable of navigating in shallow waters to pursue terrorists. Instead of a periscope the crew of the new sub will use a special high resolution digital camera. This new feature allowed to move the captain's bridge to a more spacious compartment on the lower deck of the sub. The torpedo compartment can be redesigned too to place additional bunks there.

Like the above-mentioned Soviet sub, the US nuclear submarine is equipped with unmanned watercrafts, which will be used for reconnaissance purposes under the water.