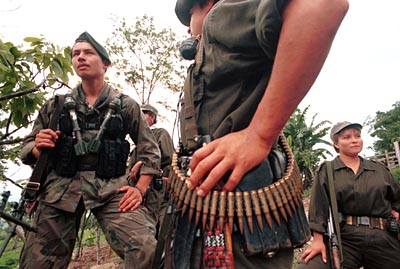 Quoting secret intelligence reports, Defense Minister Jorge Alberto Uribe said the attack was carried out by the Revolutionary Armed Forces of Colombia, or FARC, by its initials in Spanish. "The narco-terrorist FARC was responsible for the murders of six soldiers and an engineer," he said in a communique.

Mr. Uribe, brother of the conservative president Alvaro Uribe contradicts Venezuela's version about an incursion of far-right commandoes. The situation could become explosive, as while both sides suspect illegal Colombian armed groups, establishing the identity of the attackers could affect sometimes tense relations between the South American neighbours.

At the moment, Colombia's conservative authorities are conducting peace talks with far-right death squads, and the incident, if finally attributed to them, could affect the process. However, they do not look very interested in negotiations with the leftist guerrillas, which have repeatedly boycotted talks in the last years.

Members of the Colombian military suspect the left-wing government of Venezuelan President Hugo Chavez of sympathizing with the FARC and even allowing them to hide out across the border. It is also well known that members of the Colombian military cooperate side by side with paramilitary groups. Therefore, any involvement of the far-right death squads in clashes with another nation could become a state issue.

While both countries discuss which group was behind the attack, Venezuela has reinforced its frontier, as its officials say the country's army is searching for the gunmen.

No group has claimed responsibility for Friday's attack in the border village of La Victoria. The area has been the site of past clashes between the Venezuelan military and Colombian paramilitary troops.