George and Laura Bush signed the book of condolences

“Russia will strike terrorists where it considers it necessary and the USA will strike them where it considers it necessary,” a source from the Russian Foreign Ministry said as a comment to George W. Bush's statement. The US president said that Moscow and Washington were standing shoulder to shoulder in the struggle against terrorism. Bush released the statement during the mourning ceremony at the Russian embassy in the USA on Sunday. 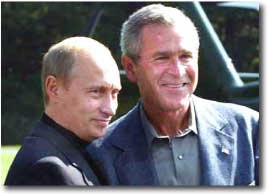 Spokespeople for the Russian Foreign Ministry said that the Russian government was not considering an issue about dispatching its troops to Afghanistan and Iraq. Russian governmental officials withhold all comments about Russia and US to conduct joint anti-terrorist operations in other parts of the world, in CIS states, for example. Russian ministerial officials believe that the “shoulder to shoulder” aspect will take the form of intelligence information exchange.

George W. Bush and his wife Laura Bush came to Washington from Camp David to make a record in the book of condolences in connection with the tragedy in Beslan. The visit was reportedly not included in the president's official schedule. Russian ambassador Yury Ushakov met the American president for a short conversation. After that George W. Bush put down his record in the book of condolences. The president copied the writing from a piece of paper he brought with him. Laura Bush signed the book after her husband.

The US president addressed to the Russian ambassador and reporters afterwards. “I'm here to express my heartfelt sympathies for the victims and the families who suffered at the hands of the evil terrorists. The US stands side by side with Russia as we fight off terrorism... We stand shoulder to shoulder. The atrocities that took place in the school were beyond comprehension. Many in America and, I know, many in Russia, simply cannot conceive the hearts of a person that would mow down innocent children.”

Ambassador Ushakov said that the American president expressed his support of Putin's policy. However, these words are missing in the official verbatim released by the White House. The document does not contain Bush's words about the necessity for Russia to strike preventive blows against terrorists either. Ushakov told reporters that Bush said the following: “One should not wait for a suicide terrorist to kill himself. One should try and destroy the terrorist.” The Russian ambassador also said he had heard similar statements from US Defense Secretary Donald Rumsfeld, when the latter visited the Russian embassy.

The American leader did not comment on the Chechen issue, although the president released such statements before, at the State Department. Furthermore, US Secretary of State Colin Powell wished not to refer to the statement from his official spokesman Richard A. Boucher, who said last week that the USA had reserved a right to contact Chechen politicians, whom Moscow might dislike. Powell stated in an interview with NBC that spokespeople for the US State Department had not held any meetings with Chechen separatists. Powell also expressed his certainty that Vladimir Putin would persecute the terrorists and would not contact the child-killers. “The tragedy in Beslan cannot be justified,” the Secretary of State said.

Viktor Kremenuk, deputy director of the Institute of the USA and Canada of the Russian Academy of Sciences believes that the cooperation between Moscow and Washington has not taken the shape of a military alliance yet. The specialist, however, does not rule out that the alliance is possible. One could witness certain aspects of the military cooperation during the campaigns in Kosovo and Afghanistan. However, the military cooperation between Russia and the USA may be complicated because of the conflict with the former Soviet republic of Georgia. The western consortium is building a very important pipeline in Georgia, and Washington will not agree to strike the republic.

Russia will have to explain it every time that it faces the issue of the international terrorism, that it does not pursue its selfish needs. Unlike the USA, Russia can not act single-handedly. America considers Russia a medium regional power, which blocks the mutual relations between the two countries.