The battle for Venezuela begins on Sunday 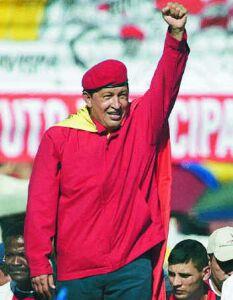 Latin America, the United States and the whole world get more and more involved in the internal political struggle to control world’s fifth oil exporter.
From one side, the populist leader and constitutional President Hugo Chavez; on the opposite, the conservative forces led by local and multinational corporations.

On Sunday, the Venezuelan people had a chance to decide either to go ahead with President Chavez’s democratic revolution or to step off and head to a new approach to the United States. The preliminary results released by the country's top electoral officer on Monday, demonstrate that President Chavez probably received the necessary support from his fellow citizens.

But also, Venezuela’s decision will surely have a straight effect in all Latin American nations where, according to last researches, trust in democracy has fell to its lowest in decades.

To oust Chavez from power, Venezuela’s conservative opposition needed 3.6 million votes (around 60% of the voices), the same amount obtained by Chavez when re-elected in 2000. However, polls say the recall vote is too close to call, and even when Chavez may lose by close margin he would be able to stay in power until its expiry in 2006.

As in the old times of the Cold War, reds and whites put colours to the political struggle. Chavez followers usually dress in red at the massive rallies, their leader use to crown with his outstanding charisma. The opposition, in turn, prefers the national yellow, blue and red colours of the national flag and to talk about transparency and purity in the administration.

The contrast is also evident in the social background of the two factions. While Chavez’s supporters mainly come from worker families in the slums outside the capital Caracas and other major cities, the opposition is widely supported in the wealthy areas of Caracas.

Before Chavez seized power, Venezuelan politics were like an upper-class party in which everything was very refined and educated and cosmopolitan. The toiling masses had no representation at all. Dark skinned leaders only jumped into the scene with Chavez, himself an army colonel with black and Indian ancestry, and provincial accent.

Loyal to his background, Chavez led a series of social reforms that for the first time put the poor at the top of the Venezuelan public agenda. He also kept his promise not to privatize the national oil giant, PDVSA, which controls country’s vast oil and gas resources.

Therefore, Chavez combines a progressive social program with a well known anti-imperialist rhetoric that make this South American country to adopt an independent line in foreign relations as a new approach with Castro’s Cuba. By the way, the Caribbean communist leader forecasted an easy victory for Chavez in the referendum, as said that a setback would be “very strange”.

However, not only Castro’s Cuba is in well understanding with Chavez’s Venezuela: Mercosur block nations, mainly Argentina and Brazil, have conducted fructiferous trade talks in the last two years, boosting commerce and political ties in the South American region.

Even when redistribution of wealth and land reform have been quite timid and moderate under Chavez, the conservative opposition begun to talk about a “Castro-communist system” being plotted in President’s mind. Shaking the phantoms of communism, a well known trick played by Mussolini, Hitler, and all Latin American bloody dictatorships at their time, the opposition led a military coup to oust Chavez in April 2002. As the coup failed, they called on a general lock out aided by rightist unions, which led a two months strike with no other visible results than to disband country’s economy.

With the above in mind, a new chapter in the “Battle of Venezuela” will begin on Sunday. As Chavez promises to step down if loses, the opposition looks more aggressive and it is not clear whether it would accept or not polls’ voice.

If, as the former Venezuelan President Carlos Andres Perez told to the press, “Violence will allow us to remove him. That's the only way we have... [Chavez] must die like a dog, because he deserves it”, a bloody reaction in Venezuela would bring Latin America back to its darkest time of dictatorships and violence.