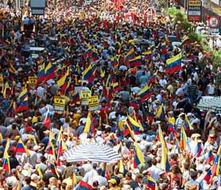 Vice President Jose Vicente Rangel said Wednesday the government would not abide by what it considered an invalid ruling.

The Supreme Court of Justice had ruled on Monday to count 876,000 disputed signatures seeking a recall of president Chavez. The Electoral Council accepted the decision, but the government opened an investigation Wednesday that could lead to the removal of the judges.

Venezuela’' government opened an investigation that could lead to the removal of three Supreme Court of Justice's ministers who validated 876,000 signatures seeking to recall president Hugo Chavez. The ruling had paved the way for a vote to shorten the mandate of the head of State, expected to expire in 2006.

Attorney General's office said Venezuela's attorney general, the public defender and the controller general were investigating Magistrates Alberto Martini, Rafael Hernandez and Orlando Gravina for unethical behavior, after stating that more than 870,000 signatures must be considered valid unless citizens disclaim them. Supreme Court’s ruling overturned previous decisions taken by the National Electoral Council that forced the citizens to confirm such rubrics allegedly in violation of the constitutional procedures.

Vice President Jose Vicente Rangel said Wednesday the government would not abide by what it considered an invalid ruling. The ruling came from the Supreme Court's three-member electoral chamber, and Rangel argued only the constitutional chamber had the authority to decide on matters concerning the recall.

Supreme Court's ruling meant a victory for the opposition after a long series of setbacks. However, the government will play its last cards to avoid a recall vote that could take Chavez out of power.

The opposition says the recall vote is the last chance Venezuela has to peacefully solve the political crisis that strains the country since 2002. On the contrary, Chavez believes the recall issue is an antidemocratic attempt launched by the opposition backed by Washington to remove him from power and drive back all the social reforms his administration did to improve living standards of the impoverished population.

Another key issue is the oil. The South American country, which sits on the largest oil reserves in the Western Hemisphere, is one of the main suppliers of the United States and the fifth world’s exporter. Chavez have repeatedly threatened Washington to cut out oil supplies if it keeps on supporting the opposition.

This week, another diplomatic conflict broke out between both nations when Chavez offered political asylum to Haiti's ousted president Jean Bertrand Aristide. Aristide said US marines in Haiti forced him to resign and took him against his will to the Central African Republic.

In the meantime, the situation in Haiti is far from being calm after Aristide’s removal, as Arisitide’s followers often clash with French and US occupation forces in the island claiming for the return of their leader. Arisitide left Africa last week and flew back to the Caribbean as special guest of the Jamaican government. That is, a few miles West from Haiti!

US State Department, concerned on the situation in Port-Au-Prince, said Chavez offer did not help to “bring Haiti back to democracy”.