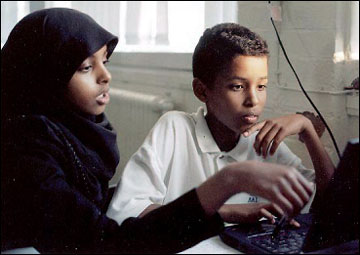 Several orphanages will be forced to close their doors in the coming days due to a lack of financing, resulting in at least three thousand children being abandoned in the streets.
The reason: the entity which financed these orphanages, the aid agency Al-Haramayn, from Saudi Arabia, has been banned from working in Somalia by the US authorities.

Invoking reasons of international terrorism, Washington forced the agency to cease its activities in Somalia, without caring about the consequences. The agency closed last May and left sufficient funds for the orphanages to stay open for some months until the money ran out.

The agency IRIN quoted workers at the orphanages who stated that they tried to stretch the money out as far as possible but that "we have now reached the end of the road".

The aid agency Al-Haramay worked in Somalia since 1992, financing eight orphanages for children aged between 6 and 13, five in Mogadishu and the other three in Marka, Burao and Hargeysa. Most of the children lost one or both parents in war.

Several single mothers expressed their concern to IRIN. They do not earn enough money to look after their children and fear that they will become street children, outside the discipline of school. Apart from providing an education and discipline, the orphanages provided board and lodging.

This, another arbitrary decision by the United States of America, will affect mainly the poorest children, who have no other hope of facing the future, except through an institution such as Al-Haramayn.

UNICEF is studying the situation, hoping that a donor appears before it is too late.