Marcelo Rebelo de Sousa, incumbent President of Portugal, has been re-elected for his second five-year term. 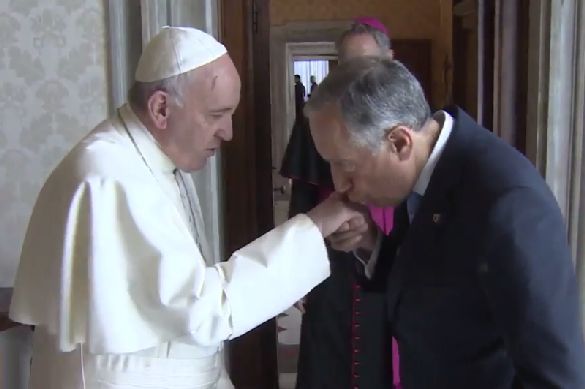 As usual, Portugal's pluralistic political climate saw candidates from left to center to right present themselves but the re-election of who the Portuguese refer to endearingly as "Marcelo" came as no surprise. The Portuguese President, despite the fact that his power base used to be the Social Democratic Party (political right), of which he was President between 1996 and 1999, understands the psyche of the Portuguese people and over five years synchronised every action with the soundbites that they wanted to hear and the actions that they wanted to see.

True, he followed Anibal Silva, whose personal characteristics made him far more distant from the people but President "Marcelo" has been truly popular without being populist, taking "selfies" with whoever approached him and asked for one, always with a kind comment, speaking to all strata of society, in public, from the elites to the homeless and being ever-present alongside the Prime Minister, António Costa during the pandemic crisis. A typical example of his omnipresential style was when a tram came off the rails where he happened to be taking a walk in Lisbon and he directed the operations, rescuing tourists and Portuguese passengers onboard until the emergency services arrived, prompting the interest of those involved, who asked "Who is that man?" "The President" "Of the municipality?" "No, the Republic". This, contrasting with a personal style which saw him driving around in his own car and walking along the beaches apparently without any security detail at all, contrasts with the United States of America where tens of thousands of troops had to protect the newly elected President during his inauguration. Other Presidents before Aníbal Silva acted in a similar fashion in Portugal.

More of the same

This is the visible side of Marcelo Rebelo da Silva and the reason why he was re-elected, although the political Left has accused him of favoring the private sector in policymaking. And this visibility, after spending years as a political commentator on prime time TV, was all he needed (more of the same), while his opponents had to present campaign policies as alternatives.

Noteworthy among these campaigns was the one by the Communist Party candidate, João Ferreira, who concentrated on a "common fight" for opportunities for the youth, the workers, women and the people, claiming that people could have a better standard of living if wealth was shared more equally, concentrating equally on gender violence. Among the groups he highlighted were also the elderly and the retired, who deserve to enjoy a comfortable phase after a lifetime working, he claimed.

Ana Gomes, with a vast curriculum as a diplomat and Member of the European Parliament (MEP) assumed her position as a "democratic socialist" along the lines of previous members of her party, such as António Guterres (current Secretary-General of the UNO and ex-Prime Minister), Jorge Sampaio (ex-President), Mário Soares (ex-President and PM), Salgado Zenha (ex-Presidential candidate), Manuel Alegre (ex-MP and poet) and Maria Barroso (MP, actress, teacher, President of the Portuguese Red Cross, wife of Mário Soares), among others.

André Ventura, of CHEGA, proclaims a populist and simplistic discourse which runs along the lines "Put the gypsies working" (doing what, when school leavers cannot get jobs?) but which appeals to those who follow Pavlovian principles without thinking policies through or taking into account socio-economic vectors which lie beyong their grasp. A flash-in-the-pan of the moment.

For Marisa Matias, who ran in the Presidential election in 2016 and won almost half a million votes (third place) for Bloco de Esquerda (Left Block), the main themes of her campaign were solidarity to fight insults, fear and hatred, a reinforcement of the National Health Service, climate change, the end of precariousness and reinforcing equality.

Tiago Mayan Gonçalves, a founding member of Liberal Initiative, and a lawyer, based his campaign around calling for less intervention of the State, claiming to be the only truly Liberal candidate among the seven.

Vitorino Silva presented himself for the second time. A paver by profession, he claims to represent the people and is known by the diminuitive of his name, "Tino" and by the village, called Rans, whose council he led as President for the Sociality Party (elected twice), so "Tino de Rans". He has managed his image well, appearing on reality TV alongside his forays into political life and has managed to make himself a household name. During the campaign, most of which was run online, he (intelligently) without going into details, approached popular causes which everyone supports.

The candidates and the results:

4% Marisa Matias (sociologist, MEP for the Left Block) Supported by the Left Block (BE) and Alternative Socialist Movement (MAS);