Selected, Not Elected, Biden/Harris Time's Dual Persons of the Year

Selected, Not Elected, Biden/Harris Time's Dual Persons of the Year 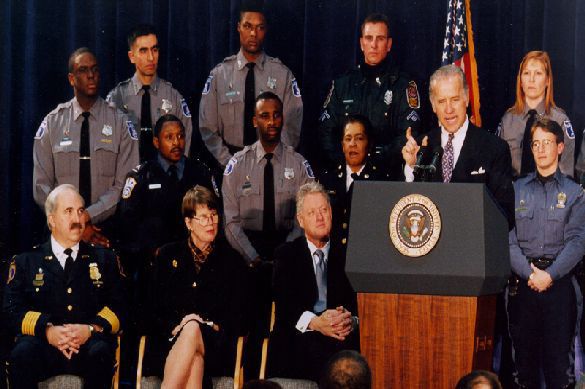 If inaugurated on January 20, Biden/Harris will serve illegitimately as US president and vice president.

Its dodgy award goes to a person, persons, group, or whatever it names as honoree(s) that "for better or for worse...(did) the most to influence the events of the year."

The most notable accomplishment of this year's honorees in the past 12 months was Grand Theft Election 2020.

He and what appears to be a double represents him at times publicly because he seems no longer able to handle the rigors of high office.

Will he only go through the motions as president post-inauguration?

For as long as he's in the White House, will a look-alike double impersonate him in public appearances because mumbling, bumbling rhetoric by the real thing is unpresidential on the public stage?

Will others, including Kamala Harris, control the levers of power?

Who will control the levers of power?

He and his wannabe-president-select-in-waiting runningmate got more than a little help from US dark forces to accomplish what one day may be remembered as the grandest of US grand election theft.

They lost in November. Trump won. They'll usurp power on January 20 as things now stand, DJT likely moving on to whatever he has in mind next.

Time's choice for dual 2020 honorees required reinventing them, what journalism polar opposite what it's supposed to be does "time" and again for its favorites.

The former vice president "recognized what he could not offer on his own, what a 78-year-old white man could never provide: generational change, a fresh perspective, and an embodiment of America's diversity (sic)."

Consistently and repeatedly ignored by Time and other establishment media is that whenever US elections are held, dirty business as usual duopoly rule triumphs every time.

Americans have no say

Ordinary Americans have no say over how they're governed or by whom.

If democracy the way it should be showed signs of emerging, US hardliners would ban it.

Governance of, by, and for the privileged few is how the US has been run from inception.

Running things equitably for everyone is considered unAmerican.

Anti-what matters most to ordinary Americans makes them ideal candidates for the positions they'll hold in the new year as things now stand.

Like others preceding them earlier, they'll serve privileged interests exclusively at the expense of world peace, stability, equity, justice and the rule of law - notions they won't touch as long as in office, while rhetorically pretending otherwise.

There's nothing remotely democratic about undemocratic Dems and Republicans - both right wings of the one-party state that take turns running things.

"The (Dem) ticket was...forged in conflict and fused over Zoom, divided by generation, race and gender (sic)."

"But they also have much in common, says Biden: working-class backgrounds, blended families, shared values (sic)."

Their aim for unchallenged US dominance what whatever it take to achieve its aims is unshared by ordinary Americans wanting a nation at peace that's fit to live in - worlds apart from its deplorable state.

Ignoring brazen election theft, Time rattled off an array of superlatives unrelated to the true measure of both figures.

It maintains the fiction of their triumph in an election they lost.

It's not the first and surely not the last time that losers were officially declared winners at the US federal, state and local levels.

Biden has a long history of supporting power over the general welfare.

His age and deteriorated condition makes it uncertain whether he'll complete four years in office.

Earlier US presidents had health issues, some serious - during their tenure, in most cases not before seeking the nation's highest office.

On January 20, Biden will be the oldest US incumbent to serve as president and commander-in-chief.

If he lasts four years in spite of his declining state, he'll be age-82 in January 2024.

Was hardline anti-progressive Harris chosen to succeed him when no longer able to carry out duties of high office?

Her prosecutorial/political history is pockmarked with serving privileged interests and her own exclusively at the expense of due process and equal justice under law.

She's polar opposite a judicial and political reformer, qualities that would automatically disqualify her for high office in the US and West.

As US senator and vice president, Biden breached the public trust he's always been indifferent toward.

His long disturbing history of serving privileged interests exclusively came at the expense of world peace and a nation safe and fit to live in.

His service to monied interests made him a corporate America favorite.

Supporting endless wars of aggression on invented enemies for wealth, power and privilege won him support from the US military, industrial, security, media complex.

Explaining why it chose Biden/Harris as dual persons of the year, Time reinvented them, creating worlds apart personas from the true measure of their disturbing records.

There's nothing remotely progressive about what they pursued throughout their public lives.

All politicians lie, Biden/Harris like virtually all others, never to be trusted, sure to disappoint ordinary Americans in office.

When repeated enough to the exclusion of truth and full disclosure, most people believe most anything - no matter how untrue.

"If you tell a lie big enough and keep repeating it, people will eventually come to believe it."

"The lie can be maintained only for such time as the state can shield the people from the political, economic and/or military consequences of the lie."

Before the age of television that made things much easier for politicians and bureaucrats to control the message, Goebbels and his boss exceeded their current US counterparts in manipulating the public mind in service to their interests.

They and their partners in high crimes were worlds apart from their carefully crafted public image before reality took hold near WW II's end.

The same goes for Biden/Harris and most others preceding them in US high office.

Their true measure is polar opposite their PR-created persona.

Author`s name Stephen Lendman
*
17:35
Death toll from Turkey deadly quake rises fast to 1,500 and counting
14:59
Russian Olympic ice dancing champion develops gangrene of his leg
13:54
Another strong earthquake strikes central Turkey as over 900 reported killed
13:22
Turkey earthquake claims hundreds of lives as warning system does not operate
18:54
Ukrainian soldier uses chainsaw and fire to release US howitzer from ice trap
18:30
Onet: Ukraine will lose in six months due to shell shortage
17:36
Russian troops defeat Ukrainian troops in Zaporizhzhia region
14:50
Number of foreign mercenaries in Ukraine continues growing
14:17
Russians buy more than 50 tons of gold in 2022
13:57
Russia will not talk to Ukraine. Russia will talk to the West
Drone with large air bomb on board explodes over Kaluga in western Russia