A (new) role for Italy in the Mediterranean?

A (new) role for Italy in the Mediterranean? 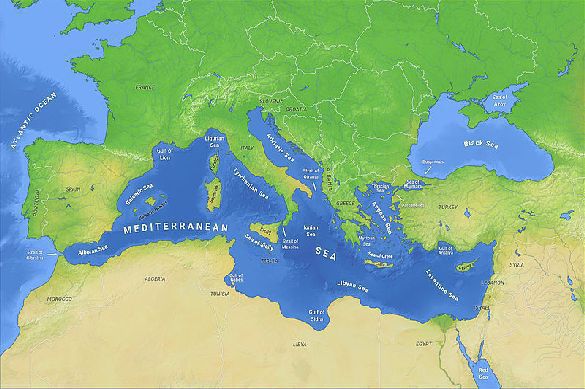 Italy has traditionally always been a Mediterranean power. Mare Nostrum is the Latin name with which the ancient Romans indicated the Mediterranean. Nostrum, of us, which belongs to us, meaning the huge importance that this inland sea had for them and, consequently, for all the other civilizations that overlooked it.

Despite this tradition, modern-day Italy looks exclusively to Northern Europe, sadly with only an economic eye and without a real long-term strategy, a strategy that spans decades of time and not one or two years as required by corporation balance sheets.

It is evident that this choice is suicidal for our nation but the current political class does not want (and perhaps cannot, for mere lack of mental tools) to change it and start a new and more fruitful strategic course.

Michele Putrino, versatile author and careful observer of Mediterranean and Middle Eastern dynamics, has agreed to answer some questions on these topics.

1) What are the hotbeds of geopolitical crisis in the Mediterranean that Italy should pay particular attention to?

A) Without a doubt, the two main ones are the one ignited by Turkey against Greece and the one that has been going on for years in Libya. In fact, both have recently merged into a single issue since the Turks opened bases in Libya. This is a big and serious problem for Italy because it is clear that behind the excuse of natural resources there is a Turkish imperial project that aims to conquer the entire Mediterranean basin.

2) Does this attention really exist? More generally, does Italy still have a serious foreign policy in the Mediterranean and the Middle East or does it sail on sight relying on "technicians"?

A) Let's put it this way: in the Italian military circles, there is a strong focus on the Mediterranean and there you also have quite clear ideas on how to act. The real Italian problem is politics: there you can navigate on sight. For Italian politicians, in fact, it seems that nothing else exists outside of relations with the countries of central and northern Europe. This is an extremely stupid way of looking at foreign policy also because, among other reasons, the heart of Italy is the Mediterranean, not Northern Europe.

3) What we have gained from the destruction of the former Libyan Jamahiriya, which is it still torn by war now?

A) Well, even participating in the destruction of Libya is exactly what I was saying to you and that is that the way Italian politicians look and act on a geostrategic level, especially when it comes to the Mediterranean, is extremely stupid. We gained nothing; on the contrary, we lost a lot.

4) Don't you think that, at this point, it is legitimate to ask what Italy's word is worth, a question that many foreign countries may have already asked themselves, with all the consequences of the case?

A) Of course we must ask ourselves, also because at present the answer is tragically obvious. And it is precisely from the given word that we must start over. It is a fundamental question because it is on the value of one's word that the very value of leadership is based. Fortunately, in Italy there are many men and women of value and words; the problem is that at the moment they don't occupy the political leadership posts that matter. Nevertheless, something tells me that the situation could change.

5) Given the political and military activism of Recep Tayyip Erdoğan, what is the West systematically doing wrong in its relations with the Turkish president?

A) I do not believe that Erdoğan's political and military activism is a consequence of the actions of the West. The Turkish ruling class (and therefore not only Erdoğan) has always cultivated the dream of reviving the Ottoman Empire. The transformation of  the Hagia Sophia Cathedral into a mosque once again proves this. Paradoxically, it is precisely the slow but progressive withdrawal of America's attention to the Mediterranean that has sparked Turkish imperial dreams.

6) Neo-Ottoman dreams, political survival, Western promises not kept.... What is it that drives Erdoğan to flirt with Moscow, making NATO and therefore Washington aroused?

A) As I said, Erdoğan's goal is the empire, so his is "only" a matter of power. We should not be surprised that this is the case: all independent countries think on the basis of the search for power; only non-independent countries (such as we are) think economically, that is, they believe that countries do what they do mainly for a material interest. It is not so. The Turks seek the support of the Russians because they know well that at the moment Moscow has no possibility of expansion in the Mediterranean, which is what interests to the Russians. The Americans, on the other hand, are alarmed because they cannot accept that a part of the West can fall under the yoke of an Islamic country. Add to this the old and never disappeared prejudice on the part of a large section of the American deep state towards Russia and here you have served the Washington fibrillation you mentioned.

7) What are the Kremlin's interests in the Mediterranean and what could Moscow's future moves be in the Mare Nostrum and the Middle East?

A) Moscow has an urgent and vital need to find an outlet in "warm seas"; this is an old problem that it has been carrying around from time immemorial. Really, at the moment I don't see many possibility of action by the Kremlin to be able to open this "gap". It is no coincidence that it is opening up to the Turks, a very risky move for Russia. A different speech, on the other hand, applies to the Middle East, where by moving to the aid of Syria it has guaranteed a strong influence in that area of ​​the world.

8) What role could Italy play in the near future? If so, what could our country do to regain lost credibility?

A) At present, Italy has all the credentials to become a great power transforming itself, in fact, into the pulsating center of the Mediterranean. If you allow me a play on words, it can really make the Mediterranean "Mare Nostrum" come back. However, Italy is in urgent need of a radical change of leadership at the political level. The absurd do-goodness that dominates unchallenged in our country, which is being fed more and more every day, and the almost absence of education in the "sense of State" is destroying it. Reversing this trend, educating our people to feel spiritually linked to Italy, reaching the awareness that ours is not a "small country" but a large Nation that has marked and continues to mark the dynamics of the world, can overturn the current situation and make Italy a real power. And all this passes by re-focusing our gazes and our strengths right on the Mediterranean.

Videointerview with Michele Putrino on YouTube (sorry, Italian only):