When a friend shoots me the video of a dealership in California in which the rioters set fire to all the Mercedes on display, cars for $ 250,000 and up, it is clear to me how to interpret the riots taking place in the USA: "It's Plutocracy, stupid!". 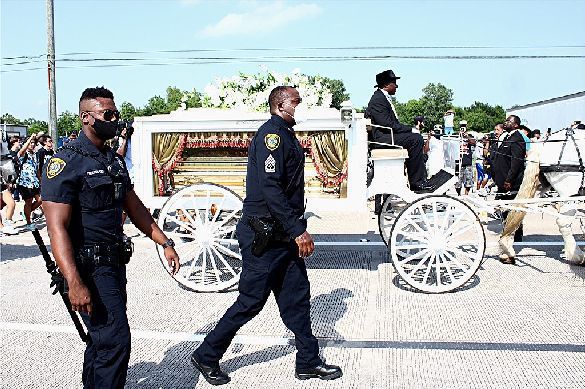 It is the result of plutocracy as a form of government and a form of life, which presents the bill.

After all, it is the moment that the same billionaires feared, if they went to buy farms in New Zealand and even in the uninhabited Tasmania, with a private air runway and bunkers, so numerous as to have raised the real estate prices in the two southern islands.

Yes, there are indications that Soros is behind certain insurrections, but this may be the latest provocation too for the Jewish billionaire. Soros emissaries have been seen paying for the breakers; but the fact that the breaks everything are so numerous, says that too many people, entire social bodies, in the American plutocracy have nothing to lose but their chains. As that guy said.

Was the murdered Floyd a porn actor with convictions for cheap robberies he integrated by bouncing for the same place where his killer policeman did? Both show which life of expediency and precariousness [they were lead by] the plutocracy, that is the perfection of terminal capitalism whose efficiency lies in remunerating more and more the capital and less and less the labor. Here and there, have the "crisis actors" reappeared seen in other scenes of unrest and false flags? The very fact that such a profession may have been born, with recognized tariffs, speaks volumes about the degree of rampant pauperism.

For a decade and more, tens of thousands of people have camped in tents and defecate on the streets, in the same metropolises where a dozen billionaires - billionaires of the outrageous level now established - people with 200 billion dollars on their account. And almost always the sidewalk defecators are working poor, poor although workers, evicted from their home, of which they have not been able to pay a mortgage payment, who sleep in the car, wash their armpits in the morning in Starbuck's toilets to go to work without smelling too much.

What politics prefers not to see is that the two phenomena - the insolent, insulting level of wealth of the privileged and the desperate poverty of the many - are the same phenomenon, one provokes the other. It is voluntary blindness because it is ideological and exempts the entire political class from doing its crucial duty.

Which? It will be surprising to know that between 1950 and 1963, in the United States, the tax system applied a rate of 90% on the marginal bracket (the highest fraction of the wealthiest incomes). It is said to be 90%: an expropriation removal.

In the White House, there were no socialists in command. Presidents named Harry Truman, Dwight Eisenhower and John Fitzgerald Kennedy followed. Statesmen who had known the Great Depression and knew that in the face of the Soviet enemy they had to make sure that the social pact, the dream of American well-being for all, remained firm.

From Ronald Reagan and Margaret Thatcher, however, it seemed better to relieve taxes to the very rich, in the ideological conviction (radically erroneous) that private individuals knew how to allocate capital with more efficiency and imagination than the State and that by allowing millionaires to become billionaires and trillionaires, drops of disproportionate wealth would also have rained on the heads of the poor (trickle down economics).

Instead, it has been seen what the billionaires have done of the billions that the tax authorities have not expropriated from them. They have purchased treasury shares to artificially increase their value; jobs moved to China; they paid for infants-like whims like Elon Musk's private spaceship, or bought the World Health Organization like the Malthusian psychopath Bill Gates; not to mention the groups of sociopaths of Silicon Valley who are preparing the ultra-human technological, that is the inhuman...

Elon Musk's private spaceship is basically a spoiled child's whim similar to the hameau de la Reine, where Marie Antoinette pretended to be a shepherdess in a fake peasant village. However, even the 15 years of wars to destabilize the Middle East as the well-known lobby wanted, must be interpreted as an immense whim that was made because the US could afford it. So rich and so armed that they don't even have the worry of winning wars. It is more important that they last, last decades; consume materials and hundreds of billions - billions that are, after all, as Eisenhower had well said, wages that have been made unavailable to workers, social security denied to workers and school services that are saved on children. Not to mention the real cost: so much, the soldiers paid it at the third or fourth mission call in Afghanistan, Iraq or in the Syrian no man's land where they were placed against the Russians to steal Syrian oil: a very high suicide rate and rampant psychic mismatch of the veterans devoured by the guilt for the atrocities they committed in those endless occupations.

When you see soldiers in camouflage, instead of shooting on arrogant and devastating niggers, kneel to them and ask for forgiveness... okay, the stupid goodness of snowflakes will also come in. But one must ask how many of those men have returned from the third or fourth deployment in Iraq or Afghanistan and are beset by the nightmare of being sent back again [1].

Because even if the whites in uniform come to the conclusion that they "have nothing to lose but their chains" too, like the Blacks, it means that the perfect Plutocracy has definitively broken the social pact. That the display of selfishness and cynicism as merit and example to imitate (greed is good) has consumed all patriotism and loyalty to the nation, indeed to society - which has become a bundle of gated communities, without mutual solidarity. And without common defenders.

Is it time that Joseph Stigliz predicted? "...the top 1% control 40% of national wealth, the top 1% have the best houses, the best education, the best doctors and the best lifestyles, but there is one thing that money does not seem to have bought: the understanding that their fate is tied to how the other lives 99%. Throughout history, this is something that the top 1% eventually learns. Too late"

For more than 10 years, the movements called "We are 99%" and "Occupy Wall Street" have been sending the signal that billionaires were breaking the social pact.

Too polite, mostly whites, they were easily eradicated. Clinton was able to call them "deplorable" ... Now the blacks are less educated and have devastated for weeks. It is known - it is believed - that Blacks do not know how to develop a political perspective, a class struggle; they can only make jacqueries, looting.

It can be an illusion, this time. As the Democrats deceive themselves to unleash the black revolt to their advantage and earn the black electorate to hunt The Donald.

Sardonic, the very rich black Robert Johnson proposed to candidate Joe Biden [2]: if you want the votes of us blacks, you must commit yourself to pay 14 trillion to the 40 million blacks who live here, as compensation for slavery and the "white privilege" of which you made us suffer.

It is sufficient to say that Robert Johnson is himself a billionaire, founder of Black Enterteinment Television (already the fact that there is a chain for Blacks only should alarm as social pathology), which he sold to Viacom for 3 billion dollars.

What he proposes to the Democrats is therefore a deal, in the perfect plutocratic style. A business negotiation. Your central bank has filled you with thousands of billions created OUT OF NOWHERE to save your speculators, financiers and rentiers. What does it cost you, in the end, to print more for us blacks?

Maybe 14 trillion is an excessive request; but which recognizes Trump's business method, which shoots big at the beginning, to meet halfway: a "deal", of which he considers himself master. It is not excluded that he makes a counter offer to the black, to buy the votes from the blacks. Nor is it excluded that the blacks found a political leader in Johnson. After all, it comes from the showbiz, like Trump.

That even in Europe the social pact is broken, say it the two years of revolt of the yellow vests, beaten, amputated and mutilated with impunity by Macron's police: of which the Italian media that today trumpet the black revolt in hatred of Donald, have not never said anything. The Yellow Vests, with Occupy Wall Street, are white and too well-behaved, they still feel bound to the values of the homeland and peaceful protest systems. Now, the post-pandemic fatal recession induced by the Riches of State will bring out the protest of the millions of regularized illegal immigrants, whom no affection, solidarity and culture binds to the Country. Then we can see scenes like this: