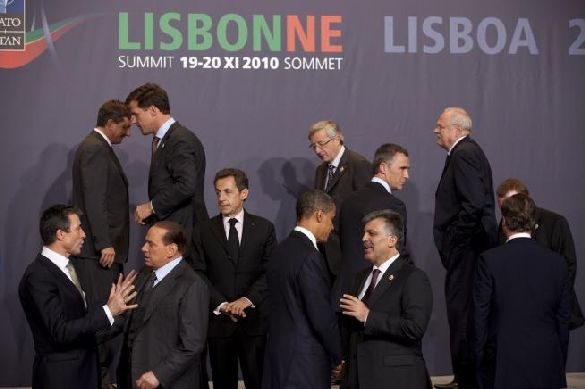 From inception, US-dominated NATO has always been and continues to be an instrument for advancing its imperial agenda by brute force - endless wars its favored strategy along with other hostile actions.

Alliance secretaries general operate as US puppets, serving its imperial interests, Jens Stoltenberg the latest in a long line of subservient NATO heads.

On Monday, he addressed the Washington-based Atlantic Council (AC), a neocon infested think tank involved in weaponizing hysteria against nations on the US target list for regime change - notably China, Russia and Iran.

AC's board of director and so-called "experts" include a rogue's gallery of hawkish extremists who never met a sovereign independent country they didn't want transformed into a US vassal state by brute force or other hostile means.

Its 2030 agenda includes expanding the alliance worldwide, greater military spending, and more preemptive wars on humanity than already - a scourge essential to challenge.

At a time when the only threats face by the US and other Western countries are invented, not real, Stoltenberg pretends otherwise in deference to his master in Washington.

Russian forces are in Syria by invitation of its legitimate government - involved in aiding its military combat US-supported ISIS and likeminded jihadists.

Stoltenberg: "ISIL and other terrorist groups are emboldened" - instead of explaining they're US proxies in Syria, Iraq, Afghanistan, Yemen, Libya and elsewhere, used by the Pentagon and CIA.

Stoltenberg: "(T)he rise of China is fundamentally shifting the global balance of power...threat(ening) open societies and individual freedoms...our values and our way of life (sic)."

In contrast to US dominated NATO's endless wars on humanity, China pursues world peace, stability, and cooperative relations with other countries - at war with none, threatening none.

US-led "values and way of life" threaten everyone everywhere, an unprecedented menace to humanity's survival.

Instead of calling for world peace and stability, Stoltenberg urged greater militarization than already.

Claiming it's to "protect our democracies" ignored their nonexistence in the US and West.

NATO's existence hasn't "kept us safe for 70 years." Its existence is responsible for countless millions of deaths, vast destruction, and human misery wherever its forces show up.

As long as the alliance exists, world peace and stability will remain unattainable.

The risk of global war with nuclear weapons will haunt humanity.

Washington wants NATO used as a global military to force its will on other nations belligerently, to crush democratic freedoms where they exist, to bludgeon or bully countries worldwide to bend to its will.

NATO 2030 is a scheme for expanding NATO worldwide more than already, for greater military spending, for crushing opposition to Washington's imperial aims.

It's an agenda that risks global war with nukes, Stoltenberg serving as a mouthpiece for diabolical US aims.

Taking orders from a higher authority in Washington, he's charged with saluting and obeying.

Claiming China is a threat to US hegemonic aims, he said the following:

Its ruling authorities "are investing heavily in modern military capabilities, including missiles that can reach all NATO countries."

Fact: China's military is for defense, not offense, polar opposite how US-dominated NATO operates.

Beijing's military budget is a small fraction of what Washington spends for militarization and belligerence.

Stoltenberg: China is "coming closer to us in cyberspace. We see them in the Arctic, in Africa."

"(T)hey are working more and more together with Russia. All of this has a security consequence for NATO Allies. And therefore, we need to be able to respond to that, to address that."

Fact: China and Russia threaten no other countries. Pretending otherwise aims to greatly increase military spending in the West when budgets should be slashed, savings directed to infrastructure rebuilding and long neglected social programs.

NATO is all about militarization and warmaking, unrelating to "protecting each other" - despite no foreign threats to any alliance member states.

Disbanding NATO would be one of the most important ways to advance world peace and stability over endless wars US-led member states wage.

The alliance has always been all about offense, not defense, notably since the Soviet Union dissolved nearly 30 years ago.

US-controlled NATO is a killing machine, an aggressor alliance, an enemy of world peace and stability.

The kind of world it pursues is unsafe and unfit to live in.

As long as the alliance exists, so will a permanent state of war on humanity along with it.