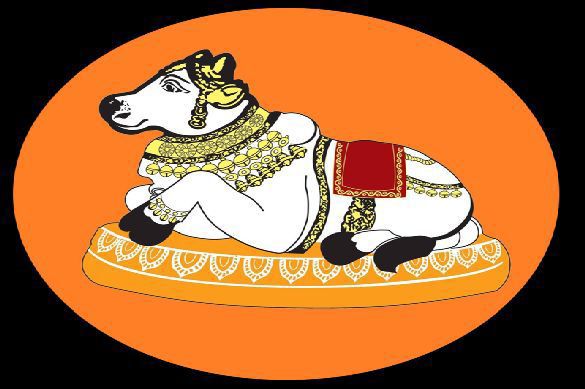 "When the Sun sets, the Moon is illuminated

When the Moon disappears, mind (consciousness) is awakened.

When mind too dissolves, everything fades away and nothing remains.

Infact, everything is wonderfully absorbed in the supreme consciousness."

A part of the creative consciousness of Lalleswari,  also known as Lal Ded, these lines clearly delineate the philosophy of Kashmir Shaivism. As a philosophy, the Kashmir Shaivism, is known for depicting the Oneness of Man with the Absolute, through devotion to Lord Shiv. As one of the foremost mystics, from the now, much in news land of India-Kashmir, she sang about the principles of Kashmir Shaivism, Yoga and Tantra. Lalleswari, in her verses known as the Lalla Vaakh or the statements of Lal Ded, thought and wrote in the local language of the people, instead of the more popular Sanskrit, of her times, only so, that her mysticism and its energy reached out to the common man in his language.

Shaivism, as a spiritual philosophy flourished in Kashmir, between the 8th and the 11th centuries and serves to deeply examine the human condition as a veritable "contraction" that brings divinity in us to take the human form. The choice of communicating this deep philosophy in the simplicity of her local language, accounts for her more astounding popularity as a spiritual leader who guided people through a period of tremendous civilizational crisis, which almost tore apart the entire social fabric of Kashmir in the 14th century.

Believed to have been "born"(some people understand her to have "appeared" on Earth as an apparition, since not much is known about her birth) in 1335, Lalleshwari was spiritually influenced by her spiritual teacher very early in life. Her guru or teacher was known as Siddha Srikanta and some of Lal Ded's verses betray a very strong influence of her teacher. He is said to have initiated her into an amalgam of Buddhist, Tantric and idealist Monism of Lord Shiv-the system also called the Trika, which made its appearance/reappearance towards the beginning of the 9th century.

According to popular legends, Lalleshwari was married at the tender age of twelve into a family in the modern day Pampor. She was called Padmavati. Her marital life, brought her immense suffering, but she endured it all with a smile. However, these problems, it is said, gave rise to an immense detachment within her, and her stoic sense told her not to believe in any "earthly" relationship and concentrate on her Self and the divine within her. Next, she renounced everything and became a wandering ascetic. As a mark of complete detachment with and disregard of the material world, she roamed about in a semi naked state. Some stories also tell us that she came to be known as Lal-Ded because her abdomen("Lal" in Kashmiri) increased in size and hung over her pubic region.

The devotional appeal of her thoughts, lies in the fact, that despite being an ascetic, Lal Ded does not recommend renunciation for the awakening of the Divine Self. She attaches a very high value to the common householder who seeks, the higher purpose in life by taking care of his family and society. The sacrifice of his selfish instincts so that he be able to provide happiness and joy to the people around him, is the ultimate sacrifice of his baser self, who has escaped the fear of involvement in the face of worldly attractions. This is what, is the beginning of the divinity in the Self. Lal-Ded, thus, also shuns the rigorous persecution of the human body for attaining divinity. To her, the human body, is the ultimate vehicle for attaining the higher reaches of consciousness .

" A yawning pit underneath and you dance above!

You'll leave behind everything, all you've collected, when you go

And you enjoy and cherish your food and drink

It spins my head!"

It sure takes, an extraordinary limit of abiding detachment to remain in the world, accept its colors and yet, shun riches, prosperity and the ties of family and children. This inspiration is not easy, unless one is divinely touched. And so touched , she was! The history of Kashmiri poetry begins with Lal Ded, whose brilliant literary genius and asceticism par excellence, is said to be an offshoot of being an incarnation of Lord Shiv Himself! She says:

"You had taken a pledge in your mother's womb never to re enter there!

Will you keep it or not?

You better die to  the desire of the world right away.

It will make you glorious even after your actual death!"

Through her pithy metaphorical sayings or Vaakhs, she tells us all that the human life is a rare occasion, only arrived at, after changing innumerable body forms and this must be used to attain freedom from the unending cycles of birth and death. She says:

"We've been coming and going for ever...

We are on move day and night,

We come from somewhere and again return somewhere.

There's surely something mysterious that we need to know.

All this cannot be total nonsensical!"

What Lal Ded spoke of in the 14th century in Kashmir, resonated in the mystical sayings of Kabirdas in the 15th century, albeit in the more northern part of India. Kabir, said , about the human birth:

"The Human birth is rare

This body very much so,

The branch does not repeatedly fructify

Once the life leaf goes!"

Yet again, he addresses the foetal form of the now matured human being lost in the world:

"O! remember the days when you hung upside down

Having touched this mortal world...

Dared you forget, the Almight's renown!"

And there was no connection between the two, except for the thoughts! Kabir came some 50 years after Lal Ded. Like Kabir, she stands venerated by Hindus and Muslims, alike for almost 7 centuries! Interestingly, the social and political changes in the valley have sought to pull her into Islam, standing to give her existence a  more  "modern" worldly bias in terms of naming her beliefs, she nonetheless, is a figure, who negotiated the spirit of the all pervading Brahman of the Vedic and Upanishadic philosophy subsuming it in the greater garb of Shaivism i.e. her devotion for Lord Shiv as the personal representative of the more cosmic existence. Lal Ded, espoused and brilliantly brought forth the Sufi spirit inherent in the Vedic system of thought, as she says:

"When the Tantra rights fade away with a devotee,

When mind too melts away, nothing remains...

Everything mingles with the Shunya(void)

And becomes part of the Supreme Shiv..."

"Shut your nine doors and suppress the ten...

Control your mind, the controller lest it should go astray

Then have hope of achieving the high station of consciousness!"

(The 'ten' include five emotions and 5 senses, while the nine doors indicate the nine openings in the material body, viz, two eyes, two ears, two nostrils, one mouth , an anus and the genitals, as have been mentioned in the Vedas.)

In so many ways, her mysticism is one of the best examples of a religion less aspiration into reaches of consciousness , no matter what names it is given, after her. It is a  deeply personal spiritual rendezvous, where the preacher is the practitioner par excellence. Of the many available editions of her sayings, Sir George Grierson and Dr. Lionel Benett provided an edited and translated version of her sayings in the year 1920, which was published by the Royal Asiatic Society. A work of linguistic and philosophic excellence, it is considered the first authentic written document bringing Lal Ded to the avid international reader.

Lal Ded merged into the Supreme in the present day Anantnag in Kashmir. Yet again, in an interesting parallel, Like Kabir, both the Hindus and Muslims lay claims on her mortal remains. A very powerful literary and cultural symbol for the indigenous Kashmiri people, Lal Ded's songs continue to be sung as valuable spiritual inspiration. The oral tradition in the local culture, together with scholars trying their best to keep her alive in the literary firmament will surely have the Sun of her person and her voice shining brilliantly for many ages to come!

Author`s name Sheeba Rakesh
14:50
Number of foreign mercenaries in Ukraine continues growing
14:17
Russians buy more than 50 tons of gold in 2022
13:57
Russia will not talk to Ukraine. Russia will talk to the West
13:34
USA's plan to give 20 percent of Ukraine for peace hoax
12:51
Medvedev: Ukraine as a state to be devastated, go bankrupt and be turned into colony
18:34
Biden changing strategy on Ukraine to reach diplomatic solution with Russia
13:35
USA's next step is to suppress European economies
12:28
Moscow wants to push Ukrainian troops away from Russian territories
19:55
US eco activist arrested for walking calf on Red Square
19:06
Putin speaks about the shelling of Russian regions
Ukrainian forces suffer heavy losses while trying to cut across Dnieper