Turkish President Erdogan personally ordered to shoot down the Russian Su-24 fighter jet on November 24, 2015, when the aircraft was on a combat mission in Syria. 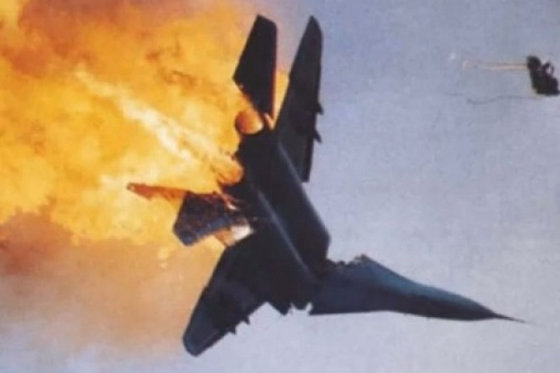 According to the Nordic Research Monitoring Network, this is evidenced by documents from NATO private briefings. At the same time, Turkey does not conceal the fact that it did not want to expose the order to strike the Russian fighter aircraft.

The information about Recep Erdogan's responsibility for the Su-24 shoot-down is contained in the report from legal adviser of the Turkish General Staff, Ercan Agin. His report analyses the legal side of the tragedy. It was the Turkish president himself, who ordered to shoot down the Russian bomber. According to Erdogan, "every military element approaching Turkey from the Syrian border ... will be seen as a military threat."

The document also says that the Turkish side had warned the Russians through emergency communication channels about the violation of Turkish airspace at least ten times before the aircraft was attacked.

From Turkey's point of view, the Russian authorities had been duly notified of the possible reaction to any military object that was approaching Turkey from the direction of Syria. In particular, the Russians should have informed their crews that they should stay at least five miles away from Turkish airspace.

This made it possible to blame Russia for the incident. The results of this act were discouraging and very expressive from the financial point of view, and seven months later Erdogan had to apologize to his Russian counterpart Vladimir Putin, as well as to the family of pilot Oleg Peshkov, who was killed by militants during ejection.

The author of the report was later accused of helping the rebels who staged attempted coup in Turkey in 2016. Specific perpetrators of the attack on the Russian Sukhoi Su-24 were taken into custody. It is believed, however, that the serviceman was not arrested, but continued serving in the Turkish Armed Forces under enhanced security.

Kerim Khas, a political scientist, believes that the Kremlin knew about Erdogan's involvement in the order to shoot down the Russian Su-24. The Turkish President had repeatedly warned of Turkey's readiness to attack in response to repeated violations of the country's airspace. Then-prime minister Davutoglu did not conceal the fact that it was him who gave the order, but it could never be possible without the participation of the head of state. Yet, in order to achieve peace with Russia, Erdogan was forced to dismiss Davutoglu in May 2016.

Interestingly, Erdogan made his apologies to Russia a few weeks before the coup. Khas notes that Turkey's elite was behind the coup, and it was then important for them to restore channels with Russia in order to avoid dependence on the West. The political scientist also believes that Moscow knows what exactly happened both at the time of the attack on the plane, and at the time of the coup in Turkey in 2016, including about the relationship between the Turkish political elite and the Islamic State terrorist organisation* (banned in the Russian Federation).

At the same time, it is not only Russia, but also the USA, the UK and Germany, who have this information at their disposal. They use this information to blackmail Erdogan and obtain advantageous concessions. Erdogan will try to blame Davutoglu for the Su-24 shoot-down, in order to prevent him from creating his own party, and eliminate him as a possible competitor.