Bolivia's Presidential Election: High Tension All Over the Country

Bolivia's Presidential Election: High Tension All Over the Country 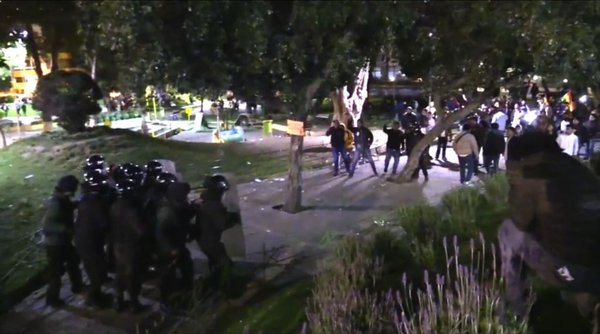 People attacked and bleeding, public institutions burning. A government official hanging on the window not to die burned fell from the third floor of the Electoral Court. Carlos Mesa, President Evo Morales opponent, has been inciting violence. Shocking images all over Bolivia after Morales' re-election, for the fourth time. The opposition across the country is promising much more. Increasing and frightful hate has taken the South American country in the last months, fueled by the mainstream media and obscure powers. Where does Bolivia go toward?

In Bolivia, truth does not matter so much, it does not come first especially to President Evo Morales's opposition, the Washington regime-backed right-wing. Emotion comes first. Deep hate, in many cases an open sentiment by those who condemn in others, in many cases without proof, exactly what their leaders did once in power, and even does as opposition leaders.

Discrimination, manipulation, and corruption: their hallmark in the South American country. As elites everywhere in the now too effervescent region.

Currently in Santa Cruz de la Sierra city, this Brazilian reporter feels like being in the too hateful Brazil on the eve of the coup against then-President Dilma Rousseff in 2016, and during Michel Temer's black years (2016-2018) which paved the way to the fascist Jair Bolsonaro. Dialogue has been impossible in Bolivia, stuck in a hateful social division.

Lies are heard everywhere in Bolivia. Too intensively. One cannot trust anyone here when politics is the subject, much worse performance from the local opposition about it. But in general, both sides are lying.

Bolivia, 14 years after Morales' first election, is far from being the modernized country heralded by part of alternative media which will be largely approached later, in another report. There is no revolution, neither a Change Process as it is often said, inside and outside the country especially by the left. But the nation now has hope.

Bolivia has now a relatively stable economy and politics, a more respected country all over the world; the current president has taken millions out of poverty and extreme poverty. All this, as the nation never lived before. The Morales administration advocates for Latin American integration, he has given minorities and indigenous people (historically forgotten and massacred) more rights, and strongly opposes the U.S. imperialism. If there is hope for Bolivia, that means having Evo Morales in the Presidency.

The Historian and Journalist Carlos Mesa from the Citizen Community, Morales' principal opponent, was vice-president during Gonzalo Sanchez de Lozada's dark years: a pro-IMF President from 2002 to 2004 who massacred more than 70 peasants, simply paid Mesa to be his vice. After Lozada's escape, Mesa took power until resigns six months later.

So the Bolivian historian and journalist, now losing the presidential election to Morales in the first round, means retrocession to the once poorest country in the region.

The election process was peaceful last Sunday. But on the following day, a foreseen terror started. No matter the election results. Mesa incited street mobilizations, leading to violence at vote-counting stations: opposition protesters have burned ballots, buildings where counting was taking place, and Electoral Courts across the country.

As the Organization of the American States (OAS) and the Washington regime have questioned the legitimacy of the result which re-elects Evo Morales, several international observers have praised the legitimacy and transparency of the Bolivian electoral process.

Shortly after Evo Morales was re-elected with 46.86 percent of the votes against 36.73 percent to Carlos de Mesa, considered 95.03 percent of votes counted from within Bolivia and across the world, violence is spreading all over the country since Monday evening: people attacked and bleeding, public institutions burning, a government official hanging on the window not to die burned fell from the third floor of the building.

The opposition promises much more: from Wednesday's midnight, Mesa voters who supposedly advocate for democracy ban every citizen from leaving home, and trades to open doors under the threat of aggression and destruction, for an indefinite time all over Bolivia.

This reporter talked to both sides last Tuesday. An opposition leader in the afternoon at Santa Cruz de la Sierra's central square called 24 de Septiembre, said: "There will surely be dead people [in the curfew], but we are not going to cede, this is the only way [to ensure a runoff]."

At the back of the square, a group of young people carefully watching the place, pointed out the same way: violence. Friendly, sweet boys when the interlocutor is prone to listening to them, they require President Evo Morales to accept a runoff or resign.

A few hours later in that Tuesday afternoon, talking to a Morales voter who owns a store in Santa Cruz de la Sierra, he answered when asked about how the current deadlock situation could end: "Only through a conflict," he said. Not because that Morales's supporter wishes it, but conflict really seems the only way in Bolivia now. Another dead-end South American nation?

As mentioned above, a lie and hate campaign by the right-wing had started in the country much before the electoral process. Such a campaign includes many religious leaders, recalling the military coups in Latin American which relied on the dominant and domineering religion which manipulate, as no other institution, the collective imaginary.

So what happens now was predictable months ago, when this reporter, as a voice in the desert, announced it. From a year ago, Bolivia strongly smells violence. It smells a coup in Bolivia, for a long time.

What comes in Morales favor, among other things to be approached in another piece, is that unlike Brazil he has not a rogue "Sergio Moro" character in his way. Nor Bolivia has a Public Ministry as Brazil has, capable of orchestrating a lawfare and a coup against the first indigenous president of the Bolivian history: the Movement towards Socialism (the official party) has coopted the Bolivian Justice system, unlike former Brazilian President Lula who provided Brazil's Judiciary more independence. Against Morales, the same regarding the Brazilian case which has taught us a bitter lesson: the current Bolivian government has not politicized the people.

As certain as there is an invisible hand working in (and against) Bolivia's too weak democracy, the near future is completely uncertain here.