What is Turkey going to do in response to US and EU sanctions?

Turkey has found itself in a circle of countries subject to US and European sanctions. Are they dangerous for Ankara? What is Turkey going to do in response? 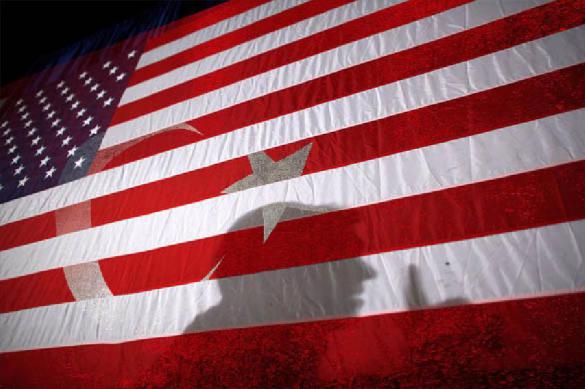 Turkey was offended by the attitude of NATO allies to its operation in Syria. The Turkish administration believes that by condemning the operation in Syria, the allies mark down Turkish soldiers as terrorists. Recep Erdogan talked about it in a conversation with German Chancellor Angela Merkel on Monday.

The sanctions that the "allies" imposed on Ankara look even more ridiculous for the Turkish administration in this context. On Monday, the European Union did not reach a consensus on harsh sanctions against Turkey during the summit of foreign ministers. Nevertheless, EU countries were advised to think twice before signing new arms agreements with Ankara. No restrictions were imposed on existing contracts. Germany, France, the Netherlands, Finland and the Czech Republic banned exports of arms to Turkey. The UK raised many eyebrows by admitting that Turkey made the right decision to conduct Peace Spring Operation in Syria. Defense Secretary Ben Wallace stated that Turkey "Turkey needs to do what it sometimes has to do to defend itself."

Erdogan threatens to respond to the sanctions by opening a way for migrants to Europe. "If you try to define our operation as an invasion, then our work will become easy," Erdogan said last week. "We are opening the border and sending you 3.6 million refugees," he added.

As for the supplies of European weapons, Turkey has long been trying to reduce its dependence on European defense manufacturers. Arms imports from the EU during the first eight months of the year amounted to about $60 million of the total procurement of $300 million. Agreements with Germany for the construction of six submarines for the Turkish Navy, as well as agreements with France and Italy on cooperation in the field of air defense systems are at risk. However, having bought arms systems from Russia, Erdogan proved that he was not clinging to agreements with NATO "allies."

The Turkish Lira has not responded to US sanctions

Donald Trump imposed sanctions on Turkey's ministers of defense, internal affairs and energy. The restrictive measures will include financial sanctions, property arrests, and US entry bans. US officials warned that anyone dealing with those individuals would be at risk of being blacklisted, while banks may lose access to dollar markets. An exception is made for state-owned companies that work with the Turks if it comes to violating the general energy supply system in Turkey.

Donald Trump tweeted that he was prepared to destroy the Turkish economy swiftly. It is worthy of note that the Turkish economy is in need of external borrowings and has a low level of savings, although Turkey's public debt is low too - 30 percent of GDP. The announced measures were less stringent than many investors feared. On Tuesday, the Turkish lira gained more than one percent against the US dollar.

The power of US financial sanctions

The pressure of US sanctions on the financial sector is based on the domination of the US dollar in the world. The US dollar is world's No. 1 reserve currency. Even if a company does not trade with the United States, it conducts its international transactions through banks that have correspondent accounts in US dollars. This accounts for more than 60 percent of the world's foreign exchange reserves. Thus, every dollar transaction can be tracked to the level of bank accounts or individuals and then blocked. The United States Office of Foreign Assets Control (OFAC) can establish its jurisdiction over any transaction made in US dollars, because ultimately dollars must go through the US banking system.

So far, Ankara has avoided financial sanctions for purchasing S-400 missile defense system from Russia. No financial sanctions were imposed on Turkey for trade with Iran in circumvention of international sanctions against the Islamic Republic either. In March 2018, the Trump administration introduced 25% and 10% tariffs on steel and aluminum imports for most of its trading partners, including Turkey, as part of the global trade war. In June, Turkey reacted by imposing $1.8 billion in duties on US goods, including coal and paper. In general, however, the bilateral trade is too insignificant for higher tariffs to harm either of the parties ($20.5 billion for imports from the US and $10.3 billion - exports to the US in 2018).

Iron and steel account for $559 million when it comes to exports. USA's direct foreign investment in Turkey was also insignificant - $4.3 billion in 2017.

Sanctions against Turkey will fail to reach their goal

Washington wants to achieve political humility through sanctions, but they do not work properly if  national interests are at stake. To date, the USA has imposed sanctions on 31 countries. US sanctions against Russia, Iran, China, North Korea, the EU are doomed to failure. It is time one should established the United Sanctioned Nations Organization to elaborate a joint response to the USA, for example, to switch to other reserve currencies.

Vyacheslav Matuzov, president of the Society for Friendship and Business Cooperation with Arab Countries, told Pravda.Ru, that efforts to force a certain country to submit to interests of the United States through sanctions are nothing but an illusion. "The global economic market works independently of politicians, one can always find other solutions. The Americans push Turkey towards Russia. I don't think that Turkey is going to withdraw its troops or announce its withdrawal from NATO. However, it will try to pursue a more independent policy within NATO. The bloc system, and the system of the unipolar world has been falling apart, but the Americans have not realized this completely yet. They come to realise this gradually," Vyacheslav Matuzov told Pravda.Ru.