Russian President Vladimir Putin arrived in Saudi Arabia on October 14. This is Putin's second-ever visit to the monarchy. His previous visit to Saudi Arabia took place in 2007. The talks will take place against the backdrop of the crisis in the Persian Gulf that may evolve into a military conflict between the Arab countries and Iran, Russia's ally in Syria. Moscow and Riyadh diverge on this issue. Saudi Arabia persistently accuses Iran on the recent attacks on its oil refineries. Moscow calls not to make hasty conclusions. 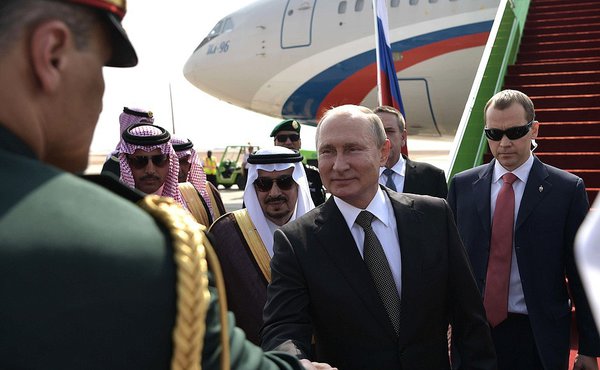 During the visit, a package of 30 agreements worth about $2 billion is going to be signed. One of the largest of the them will be an agreement in the field of airline leasing evaluated at $700 million.  There will also be many deals related to railways and the Russian railway operator Russian Railways (RZD). Another agreement is to be concluded in the field of petrochemicals, with Saudi company Sabic being one of the signatories.

As for the crisis in the Middle East, Saudi Arabia remains strongly negative in its attitude towards the role of Iran in the region on the whole. Statements from official representatives of the largest monarchy in the Gulf coincide with statements from their counterparts in the United States - the main strategic ally of the kingdom. Both Washington and Riyadh accuse Tehran of sponsoring terrorism, urging the country to abandon this practice and become a "normal state," as Secretary of State Adel al-Jubeir said. The kingdom does not need the services of intermediaries to establish relations with Iran, he stressed. For Russia, Iran is an important ally in Syria.

As for the crisis in Syria, Saudi Arabia and Russia also share different positions. From the onset of the war, the kingdom urged Bashar al-Assad to step down. Saudi Arabia has always supported anti-Assad groups. Russia managed to support Assad's regime and build friendly relations with other regional players, including the kingdom.

Riyadh and Washington have many years of fruitful cooperation. The commodity circulation between the two countries amounted to $37.6 billion in 2018.

Many in Saudi Arabia call Putin's visit a historic event.  State Minister for Foreign Affairs Adel al-Jubeir said that the relations with Russia have been developing actively over the past four years. Prior to Putin's visit, the Crown Prince of the kingdom paid a visit to Russia on a number of occasions. Mohammed bin Salman has had talks with Vladimir Putin during G20 summits as well. One of the projects that started improving the relations was the OPEC+ deal to stabilize oil prices by cutting oil output. Putin once noted in an interview that it was an initiative of the Crown Prince to work with Russia in this vein.

The volume of mutual trade and the number of joint projects have been growing between Russia and Saudi Arabia during the recent four years. Four years ago, the Russian Direct Investment Fund and the Saudi Arabia sovereign fund PIF established partnership. As much as $10 billion of long-term capital has been attracted to the Russian economy with more than 30 joint projects being developed. In 2016, the turnover between Russia and Saudi Arabia amounted to $491 million. It doubled the next year and then reached $1.05 billion in 2018.

This is the second visit of the Russian president to the kingdom in the history of relations between the countries. Putin visited Saudi Arabia in 2007, but it took the King of Saudi Arabia, Salman bin Abdel Aziz Al Saud, ten years to make a return visit. He visited Moscow in the autumn of 2017.

In 1926, the USSR became the first country to have recognised the independent Saudi state. From the 1930s to the 1990s, the relations were practically frozen; there was no Soviet ambassador in Riyadh. After USSR envoys Karim Khakimov and Nazir Tyuryakulov were executed upon their return to the Soviet Union, King Abdel Aziz, who called them his friends, refused to accept new representatives from the Soviet state.