Joe Biden must be prosecuted for orchestrating coup in Ukraine 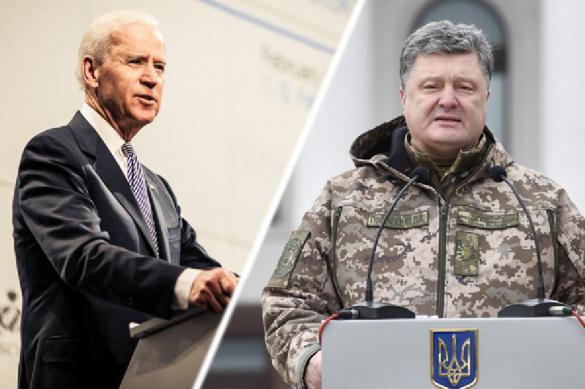 According to the published transcript of the telephone conversation between Donald Trump and Vladimir Zelensky, the US President "asked" his Ukrainian counterpart to investigate into circumstances of the dismissal of the former Prosecutor General of Ukraine, Viktor Shokin. Shokin had investigated the activity of Burisma Group, whose directors included Hunter Biden - the son of Joe Biden, the current leader of the presidential campaign from the Democrats.

In the USA, Joe Biden is suspected of corruption in Ukraine, for the purpose of which he had used his official position. In particular, he used his position in the interests of his son, who had been introduced to the administration of Burisma Group in 2014 (a gas production company in Ukraine). According to the Hill, the former Prosecutor General of Ukraine, Yuri Lutsenko, (Shokin's successor) was ready to give the White House leverage against Biden. Lutsenko himself denies the existence of the case against Hunter Biden, however, he confirms that there were cases on the investigation into company CEO, Nikolay Zlochevsky.

Burisma Group was established by Zlochevsky in 2002. The company is registered to the Cyprus offshore company Brociti Investments Limited. In 2010, during the presidency of Viktor Yanukovych, Zlochevsky became the Minister of Ecology of Ukraine. He had big plans for the production of shale gas, including in the east of the country. However, in 2014, he left Ukraine after Shokin initiated several criminal cases against him on suspicion of tax evasion, money laundering and embezzlement of state funds.

The news about the appointment of Hunter Biden for a senior post at "Burisma" was made public a few weeks after his father, then Vice President of the United States Joe Biden, visited Kiev on April 22. Immediately, many assumed that Hunter Biden earned his position of a legal advisor at the Ukrainian company through good connections. Hunter Biden had worked at Burisma until 2019. His duties were to support the holding in cooperation with international organizations."

Victor Shokin, like Lutsenko, did not initiate any cases personally against Hunter Biden. Joe Biden, however, forced Shokin to resign, of which he testified in March 2016 at a meeting of the Foreign Policy Council. He must have had a motive for that - he did not want to lose what he had acquired through hard work, as well as all ensuing perspectives. In mid-2016, a court of Kiev seized 20 wells of the gas company ESCO-North, which was related to Zlochevsky. In September 2016, the court ordered the Office of the Prosecutor General to stop the search for Zlochevsky, which was done.

After Burisma paid $7.46 million in taxes and fines, the Office of the Prosecutor General closed the tax evasion case.  The case about the embezzlement of public resources - in fact, about the issuance of licenses, which Zlochevsky issued to himself (as a businessman minister) - was handed over to the National Administration of the Security of Ukraine, where it was subsequently closed as well.

Based on the transcript of the conversation between Trump and Zelensky, the latter promised that the new Prosecutor General of Ukraine, Ruslan Ryaboshapka, would return to the investigation.

According to BuzzFeed and OCCRP corruption and organized crime investigation project, Hunter earned $3 million over several years of his work at Burisma. According to the Ukrainian media, the document available to the Prosecutor General's Office (the above-mentioned leverage) states that Zlochevsky allegedly offered US Secretary of State John Kerry and Vice President Joe Biden to distribute profits at Burisma. This happened in March of 2014. The money was allegedly paid to Biden's son and a friend of Kerry's adopted son, Devon Archer.

Nikolai Zlochevsky, according to Ukrainian sources, is alive and well. In the spring of 2019, he held the Fourth Energy Security Forum in Monte Carlo. He does not appear in Ukraine. On Monday, Vladimir Zelensky said that he would not investigate anything, because he was ordered so from abroad. Yet, there was no order - there was a request.

As  Oleg Soskin, a Ukrainian politician, economist, political scientist, said in an interview with Pravda.Ru, one should pay attention to Zlochevsky, but another aspect worthy of investigation is the allocation "of many billions to Ukraine owing to Joe Biden's efforts in the form of subventions, subsidies, technical assistance, as well as the provision of guarantees of the US government under the placement of Ukrainian Eurobonds." According to the economist, "there were about 30 issues of those government bonds, each worth a billion dollars." "Those were low premium securities - if I'm not mistaken, up to 2% per annum," - said Oleg Soskin.

"That is, Ukraine with its poor credit history, could never sell those securities to anyone, unless the American government acted as a guarantor," he said. According to the expert,  "the constant presence of Joe Biden during the uprising against Viktor Yanukovych deserves to be investigated into as well.

Yanukovych, Oleg Soskin said, agreed to a quiet transfer of power under European guarantees, and " suddenly everything was broken." "Clearly, neither Turchynov, nor Klitschko, nor Yatsenyuk would ever have broken their guarantees to Yanukovych, if they had not been given a free hand from Obama and Biden," said the analyst.

According to him, "it is obvious that the then US leadership was covering up the moment of turmoil." All this led to war and the loss of territories, the expert said.

In fact, they (Obama and Biden) conducted a "color revolution" in Ukraine, they were manipulating Poroshenko and others directly, they were supporting them financially through direct funding, and, accordingly, through guarantees for the issuance of Eurobonds. The center of the Ukrainian coup "was the Ukrainian Embassy in the United States headed by Ambassador (Valery) Chaly. There were meetings held there when Hillary Clinton's race was in full swing.

According to Oleg Soskin, the investigation of the Biden case in Ukraine will take place, because there is no other way out. However, it will happen only after President Zelensky is impeached. Zelensky speaks for the group that, apparently, is directly related to Biden. His group is against Trump, and they do not  want this investigation to start.  "I think that Igor Kolomoisky is involved too, but there is someone else, because Leonid Kuchma's comeback to politics was not incidental," concluded Oleg Soskin.