Who is going to crush Zelensky - Biden or Trump?

President of Ukraine Vladimir Zelensky has become one of the most talked-about politicians in the media lately. He has recently reminded the world of his existence by signing the bill on impeachment of the head of state. He then deprived members of the Ukrainian parliament of immunity, but that was not all. Zelensky has exploded the world media with a story of his mysterious relationship with US President Trump. Of course, Zelensky is trying to give good face and proudly declares that no one, except for his little son, exerts any pressure on him. However, those behind the political curtain know, on which side bread is buttered. Zelensky's former colleague, "Kvartal 95" actor Evgeny Koshevoi said that Zelensky was a little tired of his heavy burden. Vladimir Zharikhin, deputy director of the Institute of the CIS countries, expressed his opinion on the subject of what has been happening to Mr. Zelensky lately in a brief interview with Pravda.Ru. 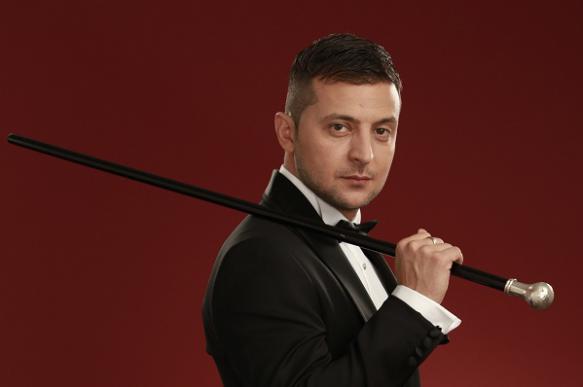 "Stripping MPs of their immunity was more like a whip in the hands of the president, because he controls the Prosecutor General's Office, which, in fact, initiates criminal proceedings. But I think that deputies will fight for their rights. As for impeachment, the law has been adopted, but in a form tougher than was previously stipulated in the draft. Now, in order to launch impeachment, one needs 347 votes. Previously, a simple majority would be enough. Given the structure of the Ukrainian parliament today, it is hard to imagine that Zelensky can be impeached.

"The president of Ukraine now has many other problems to deal with. He has found himself between the upper and nether millstone - Trump and Biden. To add more fuel to the fire, Zelensky is deeply connected with the Soros team, specifically with those who manipulates the Democrats now. One can see that the relationship between the US administration and the Ukrainian leadership has been cooling down. I actually predicted it four months ago that the Ukrainian story would be in the center of this standoff. Trump is ready to take revenge for Manafort - not just because he likes Paul, but because he was the chief of his headquarters, and Trump was forced to replace him at the peak of the election campaign. It all came from Ukraine: they used incriminating evidence against Manafort to make problems for Trump. The President of the United States can not yet make the Ukrainians give him the materials to take advantage of the incriminating evidence against Biden. We know why: because Zelensky remains under their control."