Violence in Kyrgyzstan: Another conflict sparks near Russia

It is strange to hear Russian Foreign Ministry official spokesperson Maria Zakharova saying that the events that happened in Kyrgyzstan are an internal matter of this country. 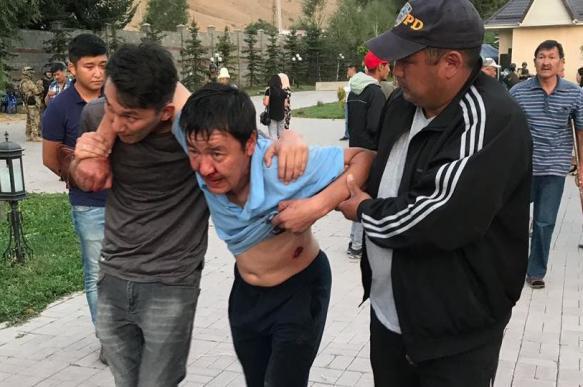 Kyrgyzstan is a member of the Eurasian Economic Union and the Collective Security Treaty Organization (CSTO). The country has open borders with Russia through Kazakhstan. An escalation of violence in Kyrgyzstan may bring Islamists to power and trigger a migration crisis. No one inspects trucks from Kyrgyzstan on the territory of the members of the Eurasian Economic Union due to joint customs space. Therefore, no one knows who is going to drive those trucks and what those trucks will carry on board. Does it sound like an internal affair or Kyrgyzstan if Russia's security can be affected directly?

Andrei Grozin, the head of the Department for Central Asia and Kazakhstan at the CIS Institute, told Pravda.Ru that Maria Zakharova is absolutely right from the formal point of view. "The fact that the former president opened fire at security forces who came to take him to testify is, of course, an internal affair of Kyrgyzstan. At the same time, Russia can not stay away from events that have been happening in Kyrgyzstan lately," the political scientist noted.

In addition to common membership in the EEU and the CSTO, Russia has a united military base in Kyrgyzstan. This includes several military facilities and an air base in Kant. There is a large Russian-speaking diaspora in the country. Large Russian corporations, Gazprom in the first place, has its interests there too. "Russia does not need any conflicts in Kyrgyzstan, like those that took place there in March 2005 and in April 2010," Andrei Grozin noted.

"However, Russia cannot dictate anything to Kyrgyzstan, because this is a sovereign country with its own political system and its own social system," Andrei Grozin continues. "The events that took place in the country yesterday were either a provocation or a consequence of external influences,"
Grozin concluded.

On August 7, 2019, special services of Kyrgyzstan conducted an operation to detain ex-president Almazbek Atambayev. They used special equipment against supporters of the former Kyrgyz president. Atambayev's security showed armed resistance, which led to a violent confrontation. As a result of the incident, at least one person was killed, more than 50 were injured.

Atambayev called for a rally in Bishkek, the capital of Kyrgyzstan, demanding resignation of sitting President Sooronbay Zheenbekov, but the authorities stormed Atambayev's resident again.

Noteworthy, Kyrgyzstan is a clan state, in which the elites of the north oppose the southerners. When a politician takes power, he promises preferences to his fellow countrymen, who in return protect their patron even after his resignation. Many Kyrgyz politicians violate the law. Charges similar to those that have been brought down against Atambayev (nepotism, corruption) had been brought down against almost all former presidents of Kyrgyzstan.

Russia was hoping to force Kyrgyzstan to stability by making it a member of the Eurasian Economic Union. The hopes were not justified. Was it worth it to grant membership to an unstable country at all?