The authorities of Israeli made an unusual decision on how they are going to celebrate 75 years since the liberation of Auschwitz concentration camp by the Red Army. Israeli officials preferred not to go to Poland for official events - they invited Vladimir Putin to Israel instead. 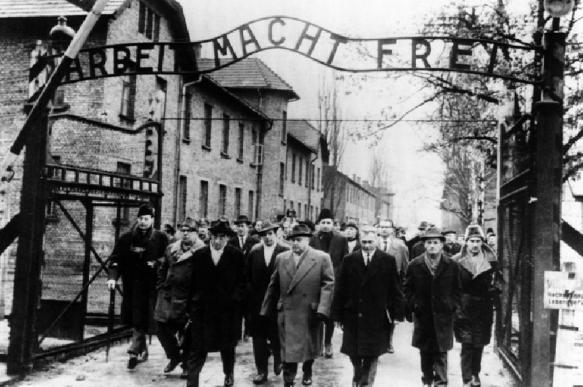 An article penned by Marcin Makowski for Wirtualna Polska Media publication says that it was Israeli President Reuven Rivlin who invited Putin. "We must show clear resistance to racism and hatred in any form, and President Putin and Russia are great allies in the fight against anti-Semitism," Rivlin wrote in his invitation to Putin adding that Russia and her president are committed to supporting Israel's security.

Makowski then wrote that Warsaw was going to celebrate the event on January 27 of 2020, but the Russian president was not invited, because Poland was unwilling to see the leader of the state, the successor of which was responsible for aggression against Rzeczpospolita (Polish-Lithuanian Commonwealth, old name of Poland - ed.) on September 17, 1939, and today - for war with Georgia, the annexation of the Crimea and for the bloody conflict with Ukraine. Yet, even though Poland has shown Putin his place, Israeli Prime Minister Benjamin Netanyahu organized an alternative celebration on January 26, at the Yad Vashem Museum (The Holocaust History Museum - ed.), the author of the article regretfully wrote.

According to Makowski, the one-day conference, which is going to be held in Jerusalem, will have an international status, so other foreign leaders are going to attend it as well. The list of guests may include Donald Trump, Angela Merkel, Emmanuel Macron, Justin Trudeau and the new British Prime Minister.

The journalist concluded that it would be difficult to expect that those politicians could appear in Poland in less than 24 hours. The news of the conference in Jerusalem came as a blow to Poland's diplomacy. The Israeli administration is going to hold an alternative event, because Israel values its union with Russia, rather than historical truth, despite the fact that Russia violates international law, Makowski wrote. The author believes that Polish officials should not go to Israel, because Benjamin Netanyahu is mocking Warsaw.

One may assume that Poland, out of respect for historical truth, will announce that it was the Americans, who liberated Auschwitz. This "respect" also allows Poland to hold marches of Polish fascists in the streets of Polish cities and demolish monuments to Red Army soldiers. This may explain why world leaders prefer not to indulge Poland in its awkward attacks against Putin.

Whether someone likes it or not, Vladimir Putin is the President of Russia - the successor to the Soviet Union, the army of which liberated Polish concentration camps. It was not Soviet, but Polish collaborators, who had delivered Jews to Nazis. Not that long ago, Israeli politicians said that the Poles "suckle anti-Semitism with their mothers' milk." The statement caused a diplomatic scandal, which led to the abolition of the Visegrad Group summit in Israel.

As for the post-war "occupation" of Poland, we would recommend Makowski ask elderly Poles, whether they had suffered during the years of communism and whether they were unfree. In any case, Poland is not a completely free state today - the country is economically and politically dependent on the EU and the United States, including in its position on the Crimea and the Donbass.