Why can't the Serbs fight for their land in Kosovo?

Why are the Serbs not fighting for their land in Kosovo and Metohija, where Serbian statehood and Serbian Orthodoxy were born? The answer is about their state of mind. 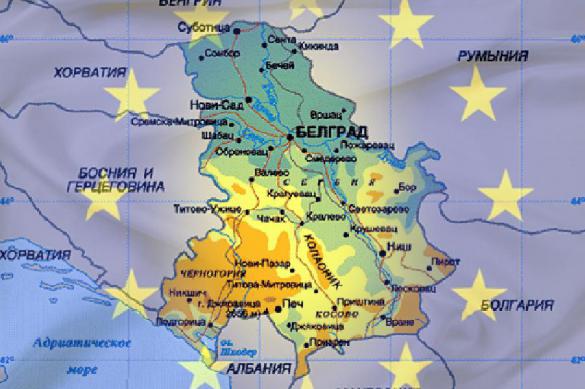 The battle on the Kosovo field near Pristina in 1389 means as much for the Serbs as the battle on the Kulikovo field in 1380 (now the Tula region) means for the Russian. It was a battle for independence between joint forces of the Serbs and the Bosnians led by Prince Lazar, and the army of Turkish Sultan Murad I. The battle ended in victory for the Turks, but they were too exhausted to continue conquering Serbia; the Turkish sultan was killed.

Afterwards, in the heyday of Serbian statehood in the 18th-19th centuries, Kosovo and Metohija's largest cities, such as Pec, Pristina and Prizren, were significant political, economic and religious centers, around which Orthodox monasteries were founded. Today, they have remained in Serb-populated cities of the region. For example, the official residence of the Serbian archbishops and patriarchs is located in the monastery of the Pec Patriarchate.

In a nutshell, those lands that are currently occupied by the Albanians are Serbian sanctuaries, which had been lost as a result of the defeat of Serbian statehood in 1999. It is no coincidence that Russia's support in the non-recognition of Kosovo's independence is extremely important for the Serbs. It is worthy of note that Kosovo has not been recognized either within the UN or the EU (five countries of the European Union did not recognize the independence of Kosovo).

Therefore, if the Kosovars give a reason to return those lands by force, one should use the chance. The chance was given on May 28, when the Kosovo Police (ROSU) conducted an operation in the north of Kosovo and Metohija, which resulted in the arrest of 19 police officers and nine citizens, among them a Russian citizen, a member of the United Nations Interim Administration Mission in Kosovo (UNMIK), Mikhail Krasnoshchekov. One of the affected individuals, Radenko Milovanovic from Zubin Potok, told reporters that the ROSU fired upon them, ambushed houses and chased women and children.

A meeting of the National Security Council was held in Belgrade. Serbian President Alexander Vucic ordered to bring the forces of the Ministry of Internal Affairs and the army to full combat readiness; troops were pulled up to the border. Noteworthy, these territories in the north of Kosovo have their own police on the budget of Belgrade, and the Belgrade budget supports the local authorities too.

Milorad Dodik, chairman of the Presidium of Bosnia and Herzegovina (BiH), told RTRS that the special operation came as a serious blow to the "fragile peace" in Kosovo and Metohija in an attempt to provoke another exodus of the Serbs. According to Dodik, the international community must show a reaction to the crisis.

Political analyst Dragomir Anzelkovic told RTS that a real war in Kosovo was unlikely, but a conflict of "certain intensity" was possible. Military intervention may happen if they start killing the Serbs and establish control in the north, he explained. "In this case, the Serbian army will enter the north of Kosovo," said Anzelkovic. Anzelkovic added that the Serbian authorities maintain contacts with centers of power in the West that block mass actions of the Kosovars against the Serbian side.

Alexander Vucic announced on May 28 that the international community condemned the excessive use of force. According to him, representatives of major powers noted that the police raid had nothing to do with the struggle against crime.

Vucic, of course, is not the president who will fight for his land, but Russia could support him.

Mikhail Alexandrov, Doctor of Political Sciences at the Moscow State University for Foreign Relations, believes that the Serbs have always been oriented towards the West from the psychological point of view. "Back in the times of Tito (Josip Broz Tito - the leader of Yugoslavia in 1945-1980) they were not part of the Warsaw Pact. They would boast of independence and the fact that they could go to the West to earn money, buy a new Mercedes and enjoy freedom that the Warsaw Pact did not have."

"They had eventually fallen a victim to NATO's aggression, and Yugoslavia was dismembered. If Slobodan Milosevic had used ground troops in Kosovo, NATO would not have carried out a large-scale ground operation. At least, Kosovo could have been divided into two, and Russia could have deployed its troops there. The Serbs could have easily deployed their troops in Kosovo," Mikhail Alexandrov said in an interview with Pravda.Ru.

He continued in an interview with the Pravda.Ru correspondent that, like, "Serbia actually surrendered Montenegro without a fight, now Kosovo will be lost, then Vojvodina (inhabited by Albanians).