Russia has every right to destroy Ukrainian warships

Following the clash in the Kerch Strait near Crimea, Ukraine introduced martial law. The relations between Russia and Ukraine have been extremely tense since the beginning of the crisis in Ukraine in 2014. Ukraine calls Russia an aggressor, so it appears that seizing and even destroying Ukrainian ships would be normal against such a background. 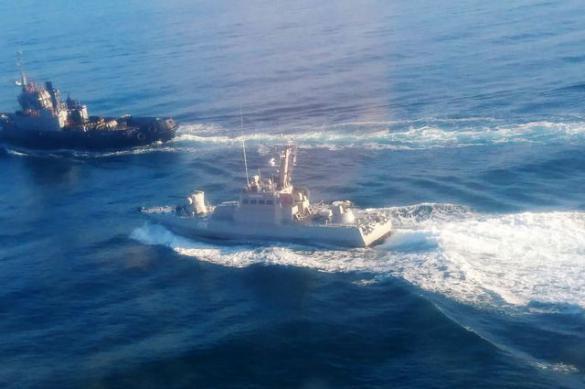 On November 25, Ukrainian boats and tugboats, heading from Odessa to the Sea of Azov, tried to enter the Kerch Strait without prior warning, but were stopped by Russian border guards. At around
noon, a Russian dry cargo vessel blocked the passage of ships through the Kerch Strait between the Black and Azov Seas. Russian military vessels, as well as Su-25 attack planes and Ka-52 military helicopters were seen patrolling the area. The Ukrainian ships started making dangerous manoeuvres, but were detained and taken to the port of Kerch. Three Ukrainian navy men were wounded in the incident after Russia opened fire at Ukrainian vessels.

Ukrainian Foreign Minister Pavel Klimkin urged the West to form a coalition to counter "Russia's acts of aggression." Russia says that she has been controlling the waters near the Crimea after the reunification with the peninsula in 2014. Moscow noted that in September, two ships of the Ukrainian Navy passed  under the Kerch Bridge to Mariupol, but the ships had submitted an appropriate application and received permission to sail through the Kerch Strait in the prescribed manner.

Maria Zakharova, an official representative of the Russian Foreign Ministry, said that the Ukrainian authorities use "gangster methods" in carrying out provocations with Ukrainian vessels in the Kerch Strait. According to her, "having torn Ukraine apart, Ukrainian President Petro Poroshenko and the whole Maidan company will travel around the world giving lectures on benefits of democracy."

We would like to note here that Ukraine's most recent provocation is very similar to the provocation that the United States conducted in the Vietnamese Gulf of Tonkin on August 2, 1964. The Americans then claimed that their ship was attacked by Vietnamese boats. The incident triggered the Vietnam War. The Americans admitted afterwards that they had lied about the attack. These days, the United States will courageously fight against Russia to the last Ukrainian national.

Figuratively speaking, if there is a rifle hanging on the wall, then it absolutely must go off. In January, the Ukrainian Parliament declared Russia an aggressor, and the Donbass - the occupied territories. In other words, Ukraine de facto declared war on Russia. On November 7, a law was passed in Ukraine, according to which Russian citizens crossing the Ukrainian border outside checkpoints should be jailed for up to eight years. It appears that clashes like those in the Kerch Strait come natural for the Kiev authorities. If there is a war, then not only can Russia seize - she can even sink Ukrainian vessels.

Mikhail Pogrebinsky, director of the Ukrainian Centre for Political Studies and Conflictology, told Pravda.Ru that the provocation with the Ukrainian vessels near the Crimea was arranged for the domestic purpose - the Ukrainian administration wants to stay in power no matter how difficult the economic situation in Ukraine may be. Russia's reaction to the provocation came absolutely natural  - Russia did what it was supposed to do, the political scientist said.

"Yet again, they have made Ukraine look like a miserable victim. They have presented Ukraine as a victim, jeopardised the upcoming meeting between Trump and Putin - not to let them come to any sort of agreement," the expert believes.

Mikhail Pogrebinsky also said that the Rada will most likely cancel the elections that Ukraine is to hold on March 31, 2019. "Yulia Tymoshenko will generate a major scandal if it happens. We will witness a circus of propaganda war between those whose dream was to wage a proxy war against Moscow and the people who will accuse Poroshenko of dictator's ambition. Yet, there will be no real war, there are no reasons for it," Mikhail Pogrebinsky said.