French President Emmanuel Macron and German Chancellor Angela Merkel shared their positive views about the idea to establish the joint European army in the EU. Donald Trump expressed his indignation on the subject, but the master of the Elysée Palace went even further and said that he wanted to reinstate France's independence. 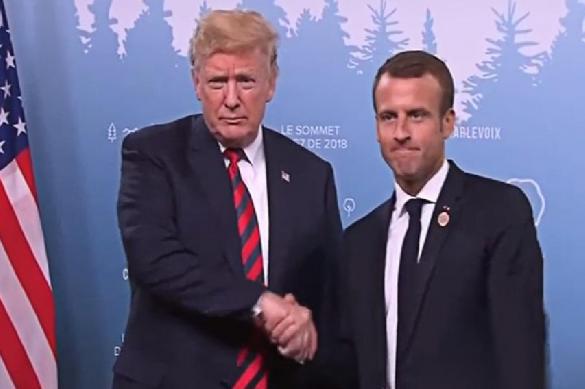 President Charles de Gaulle had tried to conduct independent policies in France after WWII. In response, he had to deal with student riots and his own resignation, but the republic managed to withstand the turmoil.

When Jacques Chirac left office, France started losing its sovereignty on almost all fronts, including in the field of foreign policy.

The United States has trapped France as a military constituent of NATO and concocted a nice name for the process - the Euro-Atlantic integration.

The phase of the sharp confrontation between the United States and Russia and then with China became a wakeup call for several EU leaders who paid attention to the completely unsportsmanlike behaviour of their good old transatlantic ally. They frowned but were still catering to Washington.

The moment of enlightenment occurred when US sanctions started affecting European interests. USA's unceremonious attacks on the Nord Stream 2 international project made the voice of the German Chancellor sound stronger in her disputes with the United States.

Washington's move to raise import tariffs on the goods that Europe traditionally supplies to the American market and manipulations with the SWIFT payment system forced EU countries to think about an independent payment system of their own.

It is worth noting that the list of SWIFT founders includes 248 banks from 19 countries. Iran and North Korea were disconnected from the system on the initiative of the UN. This time, Iran was cut off from SWIFT solely at the request of the United States.

Noteworthy, SWIFT discloses all data of its users to the USA after the 9/11 terrorist attacks. Tracking possible terrorist transactions is an important excuse, no doubt. However, all payments that all other users of the system make through SWIFT became transparent to American special services.

Russia, China and Iran have drawn their conclusions and founded their own electronic payment systems. Russia has been servicing domestic payments via the SPFS (Financial Reporting System) of the Bank of Russia.

Quite possibly, the United States will not restrict Russia's access to SWIFT. However, Russia will not have trust in Washington for many years ahead. It appears that the leaders of foreign countries, including French President Emmanuel Macron, understand what they may end up with if they decide to stand up against the United States.

Emmanuel Macron suddenly decided that France has to become an independent nation, including in the field of cyber security, as well as in all military areas - on land, at sea, in the air and in space. It looks like a riot. We will see how resolute Emmanuel Macron can be. Like Macron, Trump wants to make France "great again" but only under the leadership of the United States, of course. We will not be surprised if a colour revolution comes to the streets of Paris, and the US Ambassador to France will be handing out croissants to protesters.