The difference between Polish and Ukrainian nationalism is plain to see

The authorities of Poland united with Polish neo-Nazis for the Independence Day march.
Where is Poland going? 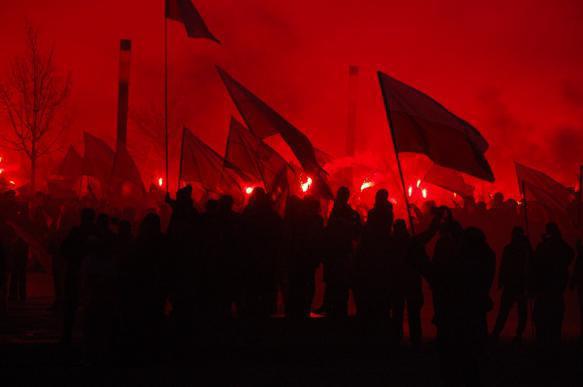 Independence marches were held throughout Poland on November 11. It was the first time, when the government held them together with the ultra-nationalist organisation National-Patriotic Camp (ONR). The ONR movement follows violent and xenophobic slogans, such as "Death to enemies!" "No rainbow, but independent Poland!" White Europe!" and others.

The movement holds independence marches every year in cooperation with nationalists from other movements "All-Polish Youth" and "Popular Movement" with up to 100,000 people participating. This year, the Polish government joined the nationalists.

Municipalities in Warsaw and Wroclaw originally banned the marches, but a court subsequently overturned the ban. Judges in Poland are under the pressure of the reform that forces judges of the Supreme Court to retire early. The ruling national-conservative party "Law and Justice" (PiS) may replace them with the people who will be loyal to the sitting administration.

Rapper Basti took part in the march in Warsaw. In a song titled "Enemy's Blood," the singer raps: "The Ukrainian blood is the blood of the enemy/I am Polish, none of them is my brethren."

Official Polish media reported that representatives of the Polish authorities were leading the red-and-white column, while the nationalists were following with their black and red flags. However, Western media outlets noticed a different picture.

"Demonstrators with faces covered chanted "Pure Poland, white Poland!" and "Refugees get out!","  The Guardian wrote. According to The New York Times, "hundreds of yards behind the officials from the governing Law and Justice Party were far-right activists known for promoting racist, homophobic and supremacist slogans."

Oleg Nemensky, a leading researcher at RISI, told Pravda.Ru that "in Europe, one can become a fascist by opposing, for example, same-sex marriage."

According to the expert, Polish nationalists follow the ideas of Roman Dmovsky - an opponent of Jozef Pilsudski, "who can really be called a fascist." The ruling PiS party "is the ideological heir to Pilsudski," said Oleg Nemensky.

Polish nationalists see the revival of Pilsudski's "reorganization" policy (the struggle against communism and liquidation of opposition parties - ed.), Oleg Nemensky explained. "They stand against the European Union and see it as a repressive machine. They are pragmatists when it comes to Poland's relationship with Russia - this is the only positive side that they may have. They idolise President Putin as a conservative leader," the expert told Pravda.Ru.

It is peculiar for Polish nationalists to share an extremely negative attitude towards Ukrainian nationalists. "They established the practice on their border to ask Ukrainian migrants about their support for Stepan Bandera," Oleg Nemensky told Pravda.Ru.