Cuba ready to buy Russian arms. Next step - Russian army base on Cuba?

Donald Trump made a short-sighted decision when he pushed Cuba into the arms of its long-time ally - Russia. Cuban President-elect Miguel Diaz-Canel is visiting Moscow on November 2. As part of the visit, Diaz-Canel will sign a 50-million-dollar loan agreement to purchase Russian arms. 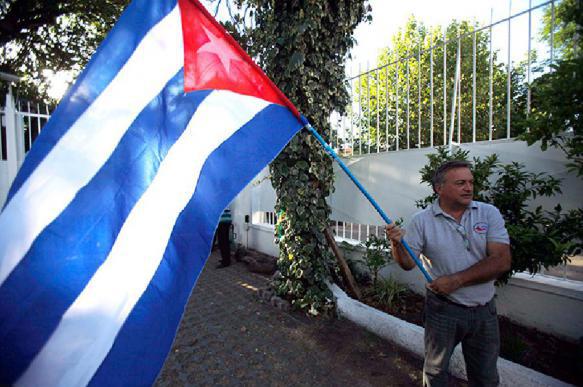 This is bad news for Washington. Against the background of 54 years of the American blockade, it is clear which country the Cubans consider their "conditional adversary." Ex-President Barack Obama had taken a lot of effort to normalize relations with Cuba: a US embassy was opened, changes were introduced in the visa regime, giving American tourists an opportunity to travel to Cuba, including for medical treatment.

Donald Trump, who came to power in 2016, called the Castro regime a tyranny and sabotaged all of Obama's Cuban initiatives. The tourist flow from the US came to naught, especially after the story of the "sonic attack" on the US diplomatic mission in Havana.

While Trump continues taking unpredictable decisions to ruin USA's relations with its neighbors, Russia continues taking part in the work of the forum "Russia-Latin America and the Caribbean" for the second consecutive year. The forum is held as part of the 36th International Fair (Fihav), which has gathered around 3,000 businessmen from 65 countries.

"We do not look at Latin America through the prism of geopolitical interests. We do not use the region as a battlefield against someone to receive short-term dividend," Russian Deputy Prime Minister Yury Borisov said at the opening of the forum. He noted that Moscow's trade volume with the region in 2017 amounted to $14.5 billion, CubaDebate writes. There are joint ventures in energy, industry, road infrastructure, agriculture and other industries. Borisov added that mixed intergovernmental commissions work with 12 countries of the region and this is a key mechanism for promoting each other's interests.

The Minister of Foreign Trade and Foreign Investment of Cuba (MINCEX), Rodrigo Malmierca Díaz, called Russia a strategic partner. According to him, the trade turnover between Russia and Cuba last year grew by 17 percent and amounted to about $300 million. The head of MINCEX stressed that during the recent years, Cuba has been fulfilling its obligations to pay the restructured debt of $3.2 billion after Russia wrote off the total of $32 billion in 2013 - all despite the economic, commercial and financial blockade imposed by the United States.

It must be said here that those were "hopeless" debts that Russia wrote off for a reason - for the sake of new contracts. According to publications in the Russian media, Russia concluded about 60 contracts. Russian companies will participate in the modernization of three power plants (the project is evaluated at $100 million), a metallurgical plant in Las Tunas (about 60 million); Russian companies will also ship rail cars to Cuba worth over $100 million, TASS reports. The Kommersant newspaper said that Russia gave Cuba a loan of $50 million for the purchase of armored vehicles, helicopters and other arms.

One cannot say that Russia has no competitors in Cuba. The transition to a market economy guarantees demand for various goods and services. CubaDebate reports that despite the blockade, as many as 12 Spanish food and beverage companies are entering the Cuban market. In late April, Cuba's trade volume with Spain exceeded $400 million, which led to a 25 percent increase in the trade balance. China is not far behind Spain either. One can say that Cuba has a very good economic perspective.

Even though Mr. Borisov denies Russia's geostrategic interest in Cuba, the issue still remains actual to this day. If Cuba buys weapons and military hardware from Russia, one will have to maintain those systems afterwards. One may assume that the visit that the Cuban president is paying to Russia comes as a step towards a Russian army base in Cuba.

Vladimir Davydov, director of the Institute of Latin American Studies of the Russian Academy of Sciences, Doctor of Economic Sciences, told Pravda.Ru that the Cuban president is coming to Moscow to evaluate vectors of cooperation between Russia and Cuba. "In Cuba, they have the generation of the 1950s in power. We can try to understand what they want," the expert told Pravda.Ru. "Cuba has achieved great success in the production of medicines for the treatment of such dangerous diseases as hepatitis, diabetes, cancer. Cuba can supply those medicines to Russia at competitive prices. Cuba is a center of medical tourism, and this is important for us. It would also be reasonable to restore fruit supplies from Cuba to Russia," Vladimir Davydov said in an interview with Pravda.Ru."

According to him, Cuba is of strategic significance for the region as the country is located at the intersection of many sea and air routes. Russian air carrier Aeroflot, while developing its network in Latin America, can count on Cuba's airports for stopovers and maintenance. "Russia should find mechanisms for promoting its goods, concessional financing, insurance. This is our weak point that we must work on to eliminate it," Vladimir Davydov told Pravda.Ru.

Russia returns to Cuba and Vietnam

Will Russian army base return to Cuba?

Russia must not lose Cuba