Putin does not need Washington to decide the fate of Syria

An unexpected format gathered in Istanbul to resolve the issue of a political settlement in Syria. Washington and Tehran did not take part in the summit, but Berlin and Paris decided to participate. The choice of Vladimir Putin's. 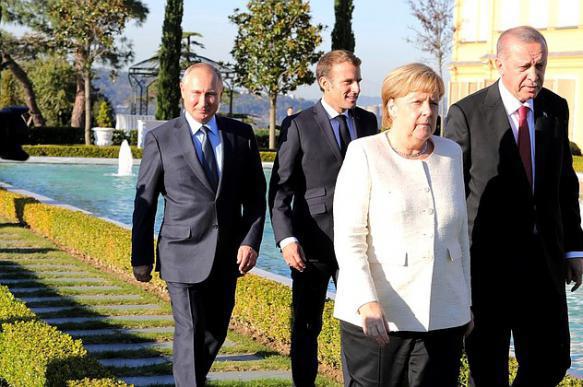 The leaders of Russia, Turkey, Germany and France  - Vladimir Putin, Recep Erdogan, Francois Macron and Angela Merkel - gathered in Istanbul on October 28 to give impetus to the process of a political settlement of the crisis in Syria. Until recently, Germany and France took part in the so-called "small group" for the regulation of the crisis in Syria. The group also includes the United States, the UK, Saudi Arabia and Jordan.

Russia, Turkey and Iran created the formed of Astana talks, which largely made it possible to end the "big war" in Syria and organise the meeting of Syrian political forces in Sochi. There is also the UN political mission of Stefano de Mistura in Geneva, but he does not find support among the conflicting parties in Syria.

Of course, the goal of the Istanbul summit was to involve Europe in the process of restoring Syria. However, Berlin and Paris had previously stated that they will not take part in those plans until Syria holds free elections and adopts a new Constitution.

Macron and Merkel came to Istanbul because France and Germany wants terrorists in Syria's Idlib to be relocated, for example, to Turkey. Otherwise, terrorists may move to Europe and organise "sleeping cells" there.

Berlin and Paris also want to have a say in post-war Syria, which one cannot imagine without Bashar al-Assad and his allies, Russia and Iran. Syria plays a central role in Macron's policy in the Middle East - this is a tidbit for French oil and construction companies that will be rebuilding Syria. After all, war is not only death - it is also subsequent loans.

As for Merkel, she is more concerned about one billion euros that Germany spends every year on refugees. However, German businesses do not mind participating in the reconstruction of Syria. The Europeans insisted that the Constitutional Committee should start working before the end of this year. Merkel said that "we could give a certain impetus to this political process."

A lot will depend on how the problem with Jabhat en-Nusra* terrorists in Idlib is resolved. Idlib seems to be the region, where up to 30,000 terrorists are concentrated. Those murderers know that they will not see mercy from Syrian justice.

Another highly important aspect is the formation of the Constitutional Committee of 150 people.
The Syrians do not really trust Stefano de Mistura, a UN representative. On October 24 in Damascus, he failed to promote the list of 50 opposition activists, and Syrian Foreign Minister Walid Muallem found the list an act of "foreign intervention."

Until recently, the Turkish government supported radical militants. Putin put pressure on Erdogan and said that Russia would support the Syrian army in the liberation of Idlib unless Turkey looks into the withdrawal of terrorists from the region. Arms supplies to militants from Turkey have been stopped, and Putin is waiting for Erdogan's next decisions.

Fourthly, the results of the November elections in the United States may also show influence on the situation. Le Figaro wrote that Macron coordinated his position with Trump on the eve of the summit, particularly about the inadmissibility of the use of chemical weapons. Mike Pompeo said on Wednesday, October 24, that the US was not going to spend a dollar on the restoration of Syria as long as the Iranians keep their presence in the country. Trump has a conflict with Erdogan regarding the Kurdish issue: Washington supports them in the north of Syria, but Ankara considers them terrorists.

Dmitry Egorchenkov, director of the Institute of Strategic Studies and Forecasts of RUDN, told Pravda.Ru that even though Trump and Macron agreed on the position, Washington prefers not to intervene directly in any international multi-sided negotiations. "The Americans do not want to tie their hands with international agreements. They want to stay aside and react as tough as possible if their interests are affected," the expert said in an interview with Pravda.Ru.

According to him, "Turkey needs to defend the north of Syria, so that the current government takes control over the whole territory, including Kurdish regions." Ankara does not want the Americans to ship arms to the Kurds and create parallel power structures in Syria, Dmitry Egorchenkov told Pravda.Ru.

Neither the USA nor Iran took part in the Istanbul summit. These are two radically opposed parties and their absence could give other parties an opportunity to find an agreement.

As Der Tagesspiegel noted, it became clear after the summit that it is Putin who makes most important decisions on Syria. Putin did not invite US officials to Istanbul. Plus, it was Putin, who decided that Europe should invest a lot in Syria, and it will be up to the Russian president to decide the role of the UN in the regulation of the Syrian crisis.

Syria towards the final victory

Iran sends clear message to USA: Get out of Syria!