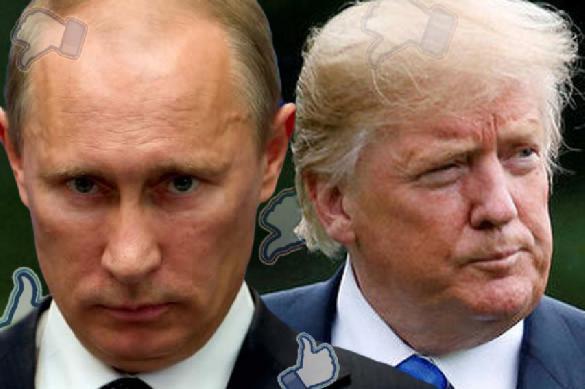 The New York Times published an article describing five scenarios for the development of relations between Trump and Putin. "It's hard not to speculate about what might happen next. To that end, we thought: Who better than some of today's most talented spy and crime novelists - Joseph Finder, Laura Lippman, Jason Matthews, Zoë Sharp and Scott Turow - to conjure possible outcomes?" the article says.

One of the scenarios say that US President Trump will be killed by a Russian secret agent with the assistance from Trump's security guard who had voted for him but then got disappointed.

The story is simple: the two drink all night, then a Russian fires his Makarov in Trump's back, but the gun misfires, and an American security guard gives his Glock to the Russian. Sounds ridiculous, but other scenarios are even more entertaining.

However, if one tries to analyse the events, against the backdrop of which such conjectures appear, one cannot but feel uneasy. It goes about the delivery of mail bombs to prominent Democrats, such as the Clintons and their sponsor, the architect of "colour revolutions," George Soros. To make matters worse, the Pentagon and the administration of Donald Trump received letters with ricin poison in them.

All this appears to be elements of the information war between the US president and the liberal democratic press. This war becomes increasingly irreconcilable. Trump has called journalists "sick" and "dishonest" people, while the Soros media behave similarly organising protest rallies at which the crowd compares Trump to Hitler.

It goes without saying that the United States will not miss an opportunity to get Russia involved even in the topic of Donald Trump's assassination. Thus, CNN noted that Russia was the only member of the international community that did not condemn the killing of Saudi journalist Jamal Khashoggi. CNN found it surprising that Putin preferred to wait for investigation results to be revealed even after the journalist's death was confirmed.

One may expect American media to announce that it was Putin, who came into collusion with the Turks to kill Khashoggi to set the USA against Saudi Arabia and sow discord among US allies.

It seems that the US media have been working to prepare the general public for the news about the assassination of President Trump. In the long run, John Kennedy was assassinated for his opposition to the Federal Reserve. In turn, Donald Trump criticises the Fed for its decisions to raise key interest rates.