No rest for the wicked Donald Trump

Less than a month is left before mid-term elections to US Congress. The Democrats failed to thwart the appointment of Judge Brett Kavanaugh as a member of the Supreme Court. They have thus suffered a defeat comparable to the fiasco of their presidential campaign. What can they do now to get rid of Trump? 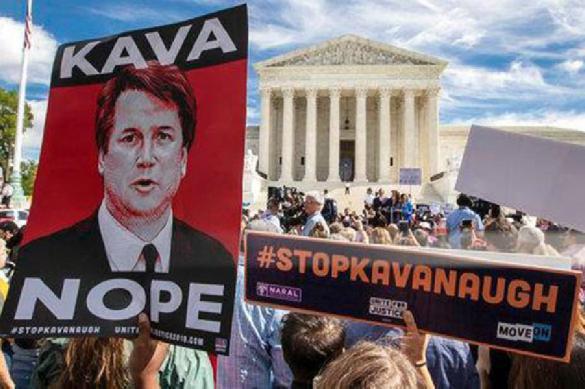 The US Supreme Court may overturn presidential decrees and suspend federal laws. Donald Trump's nominee Brett Kavanaugh was accused of sexual harassment and abuse of several women - the crimes that he had allegedly committed in a state of alcoholic intoxication.

The women, who testified against him, recalled the events from 30 years ago. This has become a common practice of political struggle lately to eliminate unwanted opponents in the United States. However, Kavanaugh's sincerity won him the congressional hearings.

The dirty political show that stained Kavanaugh's reputation and caused serious moral damage to his family members made many in the USA think whether they should vote for Democrats again. Surveys show that 52 percent of independent respondents believe that Kavanaugh's "lashing" was politically motivated. On the contrary, the scandal has united Republican voters.

Someone else will have to die. Someone always does

"I fear that there's going to be an assassination. I really worry that somebody is going to be killed, and that those who are ratcheting up the conversation ... they have to realize they bear some responsibility if this elevates to violence," Senator Rand Paul said at a radio show.

On October 6, when Kavanaugh was officially sworn in, demonstrators rioted around the Supreme Court building and attempted to get inside. As many as 300 people were detained. On Tuesday, October 9, Trump suggested on Twitter that some of those people went on rampage because they had not been paid for their previous acts.

Fox News wrote that the protesters were associated with billionaire George Soros, an architect of color revolutions, who donates millions of dollars to support protests in the United States through non-profit organisations, such as for example, the Center for Popular Democracy.

The campaign that the Democrats have lost means that they will not be able to win a majority in the elections on November 6. This will bury the idea of Trump's impeachment. Moreover, they are unlikely to keep 25 seats in the Senate that were put to vote. One does not even have to talk about a hope to win in Arizona, Tennessee and Nevada. The Republicans take the lead in the first two of these three states, as well as in North Dakota, Missouri, Montana and Florida.

An article penned by New York Times columnist Thomas Friedman warns of a civil war that may break out in the United States. The author quotes Senator Jeff Flake, who stated: "Tribalism is ruining us. It is tearing our country apart. It is no way for sane adults to act."

Yuri Rogulev, director of the Franklin Roosevelt Foundation for the United States at the Moscow State University, told Pravda.Ru that the Democrats will have chances to improve their positions. "Usually, an opposition party has good chances to gain points during first mid-term elections after the presidential vote. However, it's difficult to say whether they are going to have a majority in the House of Representatives, and whether they can catch up with the Republicans in the Senate."

"If the Republicans retain their advantage in both houses, it will not mean that Donald Trump's life will become easier. For example, many Republican senators had voted not to overturn Obama's healthcare system, although it was recorded in the party program. If the Democrats press the Republicans, it will not be a tragedy for Trump as many American presidents had faced this in the past and they had managed to find a common language with their opponents. Nothing is gong to change as far as USA's relationship with Russia is concerned," Yuri Rogulev told Pravda.Ru.

The USA will collapse in eight years

Is Trump a traitor because he wants peace with Russia?