Having been evacuated from Syria, some of White Helmets filmmakers may settle in the UK and thus bring new details to the story about Salisbury poisoners. 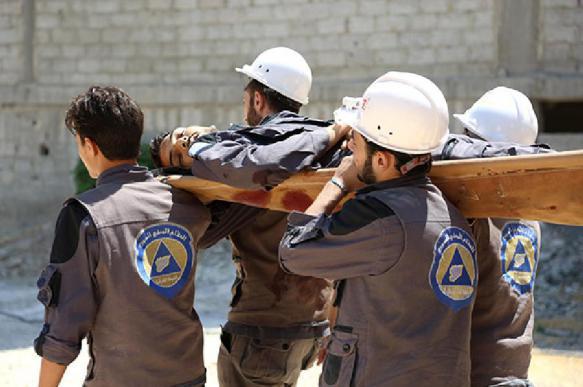 British Foreign Secretary released a special statement, in which he praised the White Helmets organization: "I am therefore proud that the UK is resettling these brave individuals and their families and giving them the opportunity to rebuild their lives here. The actions of the White Helmets demonstrate true modern day heroism. They are rightly respected for their courageous, life-saving work and have previously been nominated for the Nobel Peace Prize. We welcome the first White Helmets to be resettled in the UK," British Foreign Secretary Jeremy Hunt said.

In this context, I would not be surprised if Osama bin Laden could be awarded the Nobel Peace Prize. They do not award this prize posthumously, but Mr. Bin Laden is no different than the "heroes of modern times" in the interpretation of the head of the British Foreign Office.

Against the background of the sluggish creativity of Theresa May's producing center and the degradation of the plot lines in the Salisbury drama, the White Helmets could revitalize the production, given that they have an extensive experience in the field of fake cinematography.

Protective suits worn by British special forces on the crime scene scare viewers off. However, everyone wants to see "brave individuals" grabbing water hoses and throwing themselves into the epicenter of a chemical attack wearing white helmets only. Viewers would be so impressed with their heroism that it would never occur to them that a human being can hardly survive or remain unharmed having been exposed to combat nerve agents wearing just helmets for protection. As is well known, cinematography works miracles.

The White Helmets do not use any computer technologies in their production. They make raw video products for those always willing to consume political popcorn.

As long as British officials welcome them with open arms in the UK, their creativity may get a second wind and expand fake horizons, so to speak. By and large, it was the White Helmets that triggered the US missile attack on Syria.

To distract people's attention from the failure of Brexit negotiations, Theresa May also needs to find another gust of Novichok wind. The British administration wants to kill the clock and make the Salisbury story continue, even though nothing is known about the fate of the phenomenal survivor - Sergei Skripal himself.

What if the White Helmets conduct their own investigation into the Salisbury incident and find out that Novichok nerve agent was produced somewhere near Russia's Hmeymim airbase in Syria with Putin and Assad supervising the production personally. This could be a great scenario to play on.