Italy: They sense the end

The city of Rome is experiencing a civil rebirth that has no equal in the contemporary history of our country and the merit is largely of its brave and intelligent mayor, the wonderful and wonderful Virginia Raggi. Merit not all of her, of course, because it is fair to recognize the value and commitment of many of her precious collaborators. But she is the mayor in office and is Mrs. Raggi who had the courage to take the burden of a fatigue worthy of Hercules: giving back dignity to a city that corrupt politicians and criminals had led to a disarray cannot be considered an easy thing to do. Since the situation was under the eyes of everyone in both moral and material degradation, we must believe that there was also a certain amount of presumption in accepting this challenge, but great tasks require great commitments, knowing how to risk, exposing oneself in the first person. There is indeed the possibility of failing and the certainty of always receiving unwarranted criticism: not only for the silly game of low-level politics, but also for the will of criminals to recover the ill-gotten gains and return to power. 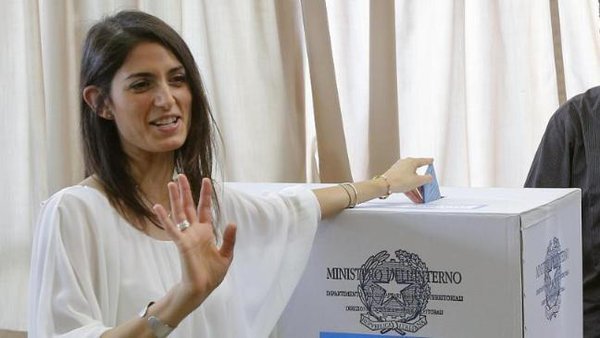 I believe that Virginia Raggi is succeeding in her task: slowly, step by step, thanks to a hard and honest daily work, she is literally upsetting Rome for the better, bringing it back to the level that is due to History and tradition. Road maintenance proceeds at a sustained rhythm, improving the road network but above all doing what the previous administrations have not done in this regard. The management of the aqueduct has improved to the point that there have been no water emergencies in the past torrid summer. Social services have been improved. Public homes distributed in quantities and speeds previously unknown. Urban hygiene and waste collection both received a positive boost. Public transport is undergoing a radical transformation to make it more efficient without dismissing personnel, optimizing costs, modernizing transports, eliminating inefficiencies. The synergy between the Capitoline administration and the new national government has had the first positive effects also in the fight against some criminal clans that in the past have made a mess with the lives of honest people.

But if I had to use a further adjective to characterize Virginia Raggi and her administration, besides the positive ones I wrote before with admiration and love, then I would definitely use the word dangerous.

And it is not just Virginia Raggi to be as dangerous. Even the new Italian government is dangerous, the government came out from the results of last March 4, the government chaired by Giuseppe Conte, the government that the Italian people wanted. This government a few days ago dared the inconceivable: it raised his voice with Brussels coming to threaten the veto on the approval of the next European budget if the European Union does not accept its responsibilities in the management of immigrants. Matteo Renzi also threatened to do so when he was Prime Minister but nobody paid him any attention. Now Giuseppe Conte does it and immediately the great Italian press, the one that once far in time had perhaps something to say, has stigmatized fiercely the intention of our government, hoping it fall shortly. Yet Prime Minister Conte has a dignified bearing, speaks excellent English and, at the moment, does not seem to maintain any harem of bitches with which to make orgies. Among the priorities of his government there is precisely that work that the economic crisis in Italy has made so difficult to find and keep. He has been in office for a few months, and although ruling a Nation is not like ruling a city, I like to think that he has chances and that he will last longer than his detractors want. However, it is well known that the current Italian government is also a coalition of different parties, such as those that preceded it, and within a coalition between parties there are also relations not always immediately visible. In addition, it seems to me that there are emerging some (not so clever) fifth columns, even in key positions. From September, we will know what awaits us.

Why did I use these two examples for a maybe little too long introduction?

Browsing the net I came across an article by accident, "But plan B can not work" [here, in Italian: https://keinpfusch.net/ma-il-piano-b-non-puo-funzionare/]. I read it once, listlessly and I immediately went over for content that seemed more interesting. But something stayed inside me. Little worms began to gnaw and back on my feet, I reread the article more carefully. I do not know much about this "plan B" that the Italian "sovereigns" would like to implement against Brussels to solve the Italian debt crisis and to whose criticism the author dedicates the article, pulling in dance (sic!) even fascism. However, reading the article and surfing the blog that contains it has crystallized a very precise idea, first latent and nuanced. And the idea is this: there are forces in Europe that suddenly have sensed their end.

These forces have always known that they were pulling too much the rope with the countries that disgracefully they called PIIGS, pigs, but they preferred to ignore the warnings of common sense because they were inebriated by the scent of the victories that they achieved. As compulsive bulimics, they were never satisfied with the success that they reaped in achieving either the continued despoliation of a Greece devoted to self-extinction, or what to many seemed to be the voluntary submission of an Italy ruled by people about whom the future History could have some reservations.

Always winning and therefore always preserving if not even increasing their wealth, these forces were easily self-convinced to represent a future in progress devoid of alternatives and, messianically as it was inevitable, from the purely economic sphere already in itself suffocating for the peoples, only widened to the social one, starting to corrupt the societies with Soros-style models. The absolute control of the media has initially facilitated this process but the weapons (Facebook, Twitter, YouTube etc) and the methods that have been designed to neutralize the opponents, now begin to be used against their own creators to bring into the parliaments of the Nations, which both still exist despite their efforts, people and political parties that share the same common idea: there is an alternative. This idea began to spread, impossible to stop.

The Italian journalist Giulietto Chiesa in 2003 defined in one of his books as Superclan those group of people, forces, interests and economic-military powers that began to cross national borders from the end of the Soviet Union, acting as a structure with a monolithic appearance. But the election of Donald Trump has formalized a rift in the US Superclan which is de facto a rift in the Western Superclan. The European side is now without a single referent in Washington and this influences Italy too.

The European Superclan, that apparently makes chiefly to Germany and other mythical (so to speak) Nations of Northern Europe, has sensed its end and if it is not really its end, at least it's afraid of receiving such a blow to feel it in the bones. The current Italian government is in fact a break with the past experience because now it is clear that no one in Italy wants to end up like Greece: "... over, dead and buried ... exploited to the limit and the carcass thrown to the dogs" as in the tragic words of Paul Craig Roberts.

It is not the Italian government now in office to be fascist, to overestimate the allies (but who would these our allies be?), to underestimate the duration of the war and the resistance of the enemy, as apparently suggested by the author of the article. It is not the Italian government in office that is and does all this, just as it wants to avoid to Italy the Greek scenario. If anything, the Italian government is day after day all too aware of the incredible array of enemy forces ahead, many of them unfortunately Italian, in compliance with the principle that there is an irrational desire to disappear into nothingness that sometimes affects people, sometimes the individual.

It is the counterpart, the Superclan, who realized that it was fractured in what previously it was deluding himself thinking as its unchangeable (because natural) monolithic structure, and now can no longer cull himself with the idea of ​its own invincibility. As the elephant in the savannah can not really conceive the hunter who can shortly knock it down until he does it, so the Superclan can not conceive even the simple idea that someone can really oppose it, maybe even from the inside, even if for different reasons. But once seen the danger, it attacks with the methods it has already successfully tested in the past and which are now, at least partially, ineffective.

Not all enemies are equal. Not all of them carry the same honor in dealing with them. Therefore, we should ask ourselves how much fear it is right that we allow ourselves of an old man like Schäuble, who growls at us from a wheelchair. Or of old man like Juncker, who, according to many, seeks his truth in the bottoms of bottles. Or of someone like Merkel, fat and childless.

If indeed "the architecture of the euro is conceived in such a way as to balance the peripheral crises to the advantage of the center" as the mysterious author says; if indeed "the markets will teach Italy to vote for the right thing" as tweeted Oettinger, who stubbornly persists on the same line; if it's really all this, so now more than ever it is worth resisting and fighting for our country. The alternative, however, we already have it: it is Tsipras' Greece, in the tragic words of Craig Roberts.

Honesty is dangerous because it leads to the awakening of consciences: it leads you to see your neighbor as a part of yourself and makes you willing to sacrifice yourself for him that is also part of you. It does not save you from mistakes but it encourages you to go further. A national government that operated with this criterion would realize a miracle because it would reawaken our people, disbanding Quislings and filthy figures still in the service with the Superclan, court buffs disguised as politicians. An honest government, demonstrating with the facts of knowing how to work for the good of the Nation and how to speak to people's hearts, would lead the Italians to volunteer to make their contribution, aware of the sacrifices but willing to face them. This is what the other side fears: the awakening of our people.

I hope that Giuseppe Conte's government will succeed in this difficult task. It goes to the fate of our Nation.

14:51
Best pilot of Ukraine Air Force killed under unknown circumstances
14:37
Russia prepared to terminate diplomatic relations with USA on one condition
20:57
Video shows moment of Salman Rushdie attack
19:16
Russia will face serious sanctions as USA will not recognise Donbass referendum
18:57
USA successfully empty European armouries having supplied all weapons to Kyiv
18:21
Chechen war veteran who now works as drag queen sings Russian anthem in a gay club
15:49
14-year-old hockey player dies as puck hits him in the chest during training
15:30
Video: Apartment building partially collapses in Omsk
19:52
10,000-strong group of the Armed Forces of Ukraine melts away inconspicuously
19:39
Strategic Culture: Russian Navy threatens NATO in nine seas at a time
World
The Guardian reveals when the West will stab Ukraine in the back