Syria towards the final victory

There is an air of victory in Syria, after the liberation by the government troops of the areas controlled by the Islamic State and by the rebels in the south of Damascus. According to what Syrian religious sources tall to Gli occhi della guerra, they are organized to think about the country's future at the end of the conflict. It is the sign that something has changed and that one begins to think of a tomorrow of peace. 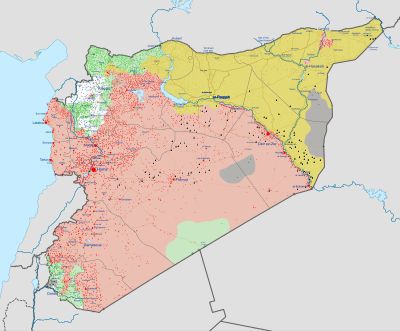 "We have a sense of joy, facing the future. But I wonder: a country, when it lives a war, is helped by various humanitarian organizations. Why does no one help the Syrian people? Why do not they organize initiatives for the rehabilitation of those who have been traumatized by the war?" sister Yola asks, from the memorial of St. Paul.

"We have not been helped - continues the religious - by any foreign organization. On the front line there are our young people, our volunteers, who take care of the psychological, educational and health support to the population". "We ourselves - sister Yola tells us - want to start over. And it is typical of the Syrian people."

Yesterday, civilians and government troops marched to al-Hajar al-Aswad, a suburb south of Damascus recently ripped off by the jihadists. The images released by the agencies show the youth of the Baath party, to which President Bashar belongs to Assad, parading among the destroyed houses, playing and marching.

The images are very evocative and recall, albeit on a smaller scale, the great concert organized by Russia after the taking of Palmira.

Syrian soldiers, on the other hand, show the national flag, often accompanied by the Palestinian flag.

According to reports by Al Masdar, 124 improvised devices left by ISIS in the districts of the Yarmouk refugee camp would have been found. Not a novelty: before leaving Mosul and Raqqa, in fact, the jihadists had "trapped" their cities to be able to make the most deaths even after they left.

But the Syrians are not trying to move forward only in the south. After the release of Aleppo in December 2016, a major campaign was launched to rebuild the city, as Nour, 24 years old, explains: "Life is coming back. We are assisting people who own houses and markets to return to the old part of the city. Now there are many luxury shops and restaurants. And life flows normal in this area."

This great work of reconstruction was made possible thanks to the intervention of the government, as Nour explains to Gli occhi della guerra: "They brought back electricity, water and the streets are finally illuminated and the roads are paved. They are working day and night."

The road to peace is still long. But Syria seems to want to travel to the end.