More than 5.8 million people voted for Nicholas Maduro at the presidential election in Venezuela. This is more than a quarter of registered voters. Why did those people vote for the man, who, as Western media write, took Venezuela to the brink of collapse? The United States has already announced that it will take action against Maduro. The US does not recognise the Venezuelan presidential election and may declare Maduro a drug dealer. In this case, Washington may launch a special military operation, similar to the one in Panama in 1989. 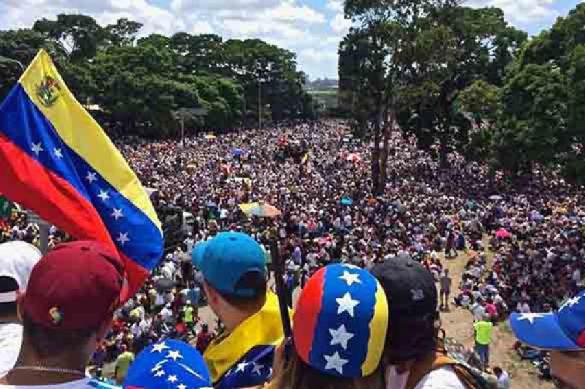 On May 20, Nicholas Maduro of the United Socialist Party of Venezuela (PSUV) won the presidential election in Venezuela having earned 5.8 million votes (68 percent).  The turnout was 46 percent, according to the National Electoral Council of Venezuela. The second-placed oppositionist Henri Falcon won 1.8 million votes, the other one - Javier Bertucci - 950,000. Compared to the 2013 election, the turnout declined by 30 percent. Back then, Maduro defeated the candidate from the Movement of Democratic Unity (MUD), Enrique Capriles, with a margin of several percent.

The world press was divided into two camps when covering the news. Neoliberal publications wrote that the election was unrepresentative, illegitimate and fabricated. A very small part of the left Latin American press, such publications as TeleSur, Brasil 247, Granma, Hispantv, defined the election as the move proving the right course of the people of Venezuela in response to attempts to ignore the country's political system.

How does Venezuela's socialism work?

Let's try to understand why about six million people came to the polls and voted for Maduro, if, according to Western publications, hunger, devastation and corruption have plagued the country from top to bottom.

It's no secret that the Venezuelan economy has been in crisis in the last four years because of declining oil prices. In November, Standard&Poor's and Fitch announced the partial default of Venezuela due to serious liquidity problems. Problems related to interest payments on government bonds in 2019 and 2024 are looming. The IMF believes that this country will complete 2018 with an inflation of 14,000 (!) percent, while the Venezuelan economy may drop by 15 percent, El Pais said.

The phenomenon that explains the re-election of Maduro is related to the well-established system of subsidies for the poor in several social programs. One of them is the distribution of food at subsidised prices through local purchasing and production committees (CLAP). This is a basket of essential food products weighing 14 kilograms for registered families - this is enough for a family of three for two weeks. One basket costs 10,000 bolivars (one dollar costs 69,000 bolivars).

The second program, Hogares de la Patria ("Household of the Homeland"), distributes cash subsidies and covers about four million families. Maduro promised to bring this amount to five million families and raised the subsidy by 56 percent (up to $7.6 for a family of two), EFE wrote. There are also benefits for pregnant women, workers, etc.

Maduro's electors are ideological chavistas who believe that their country has fallen a victims to a  conspiracy of imperialists and traitors, whose ultimate goal is to ruin the Bolivarian revolution. Some of them budget themselves to two dollars a month, but they will vote for Maduro anyway.

According to him, Venezuela lives under the pressure of an economic war and suffers from a financial blockade and smuggling. For example, the shortage of medications is caused by the actions of Colombia, which blocks the supply of medications to Venezuela, forcing the country to purchase them mainly from India.

The expert also complained that his research hardly received any coverage in world's leading media that actually announced a "boycott of silence" around the UN-led inspection.

Since March 2015, the United States has considered Venezuela "a threat to the national security." Washington imposed numerous sanctions on many Venezuelan officials, including Maduro. They are accused of corruption and illegal drug trafficking.

In 1989, for the "restoration of democracy" in Panama, the US decided that President Manuel Noriega was a member of an organised criminal group that was extorting and transporting drugs. The president was arrested as a result of the US-led military operation, and he was convicted.

Washington can also declare an embargo on supplies of Venezuelan oil. This will open the way for oil trade with Russia and China, and sanctions can be circumvented through swap supplies. A mechanism is in place to sell oil to Russia, which subsequently sells it to Cuba. It is worthy of note that Maduro maintains the Venezuelan army well.

Russia benefits from the victory of Nicholas Maduro. In more than 15 years of close ties with the chavistas, Russia has signed more than 260 agreements in such areas as medicine, tourism, agriculture, mining, oil production and arms trade. According to the Stockholm International Peace Research Institute, Caracas has given about four billion dollars to the Russian treasury in exchange for weapons.

Director of the Institute of Latin America of the Russian Academy of Sciences Vladimir Davydov told Pravda.Ru that the election in Venezuela was highly contradictory. "The Venezuelan authorities have mopped up the opposition in an unconstitutional way. Eighty percent of the parliament consisted of opposition activists, so the chavista dissolved it and created another one that was beneficial to them. The turnout was low because the people were tired of their very hard life, of constant clashes and street violence. A half of Latin America turned away from Maduro," the expert said adding that the economy of the country was a total mess.