Why does Trump ignore Europe, but not Russia?

Emmanuel Macron and Angela Merkel returned home from the United States empty-handed. Donald Trump made it clear to the leaders of France and Germany that he was determined to keep the promises that he gave to his electors. The game of the good cop and the bad cop did not help the Europeans. Why does Trump ignore the European Union, but not Russia? 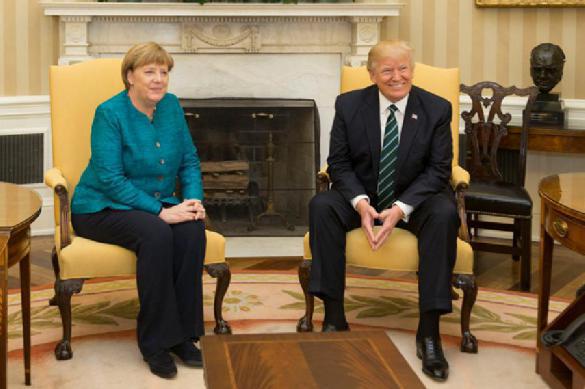 The European Union is not the center of power

Germany's Die Welt believes that Trump told German Chancellor Angela Merkel the same thing that his new Secretary of State, Mike Pompeo, told NATO foreign ministers in Brussels: the alliance for Europe is more important than for the US, so the Europeans should support it. The newspaper notes that Donald Trump will not listen to Europe's request not to impose duties on their steel and aluminum. Instead, he will ask them to allocate two percent of GDP on their defense, given the fact that the EU has a positive trade balance with the United States.

According to Die Welt, the Europeans will do their best not to let the trade war with the USA unfold. In addition, they will support the USA's tough stance on Iran. The European Union during Merkel's chancellory is even more untenable to be an influential power than it was during the times of Russia's friend Gerhard Schroeder, the newspaper concludes.

According to another German publication - Sueddeutsche Zeitung - Trump manipulates both Merkel and Macron and all other Western allies and sets the agenda. The Trump administration introduced punitive tariffs, questions the deal with Iran, withdraws the US from the Paris Climate Agreement and threatens to withdraw US troops from the Middle East, the newspaper believes. Macron tried to flatter Trump, but it did not bring any results. Merkel's "sober approach" does not work either," the newspaper wrote.

According to Sueddeutsche Zeitung, Europe suffers from the lack of one negotiator. This is a drawback of the lack of political integration, and Donald Trump will use it to his advantage, the newspaper assumes.

Political analyst Leonid Krutakov believes that America can not offer anyone a mutually beneficial project. "The US takes a destructive position being interested in the destabilization of Europe. If the world policeman loses power and no longer acts as the consolidator of world market and space, it means that he has only one goal not to let anyone else take his place," the political scientist told Pravda.Ru.

"We can see the Americans using Emmanuel Macron to their own benefit. France took part in the recent missile attack on Syria. Macron appears to be a new European leader because the UK is exiting the EU. Germany is traditionally prone towards working with Russia, so the alliance between Germany and Russia is unacceptable. Therefore, the US needs a counterbalance in Europe in the face of France," Leonid Krutakov said in an interview with Pravda.Ru.

Director of the US Roosevelt Foundation at the Moscow State University, Yuri Rogulev, believes that Macron obviously wanted Trump to like him. "Macron is a cunning man who wants to play the place of the main mediator, because the UK is leaving the European Union. This is a traditional political move for the French. France is a country that connects Europe and America, the West and the East. Macron wants to become a more influential person in the EU, he wants to compete with Merkel," the expert told Pravda.Ru.

According to Yuri Rogulev, Trump postponed the introduction of punitive measures against the European companies that hold shares of Russia's aluminium giant Rusal and buy its products. "One can say that he is meeting the wishes of the Europeans, but in return Angela Merkel pledged to increase spending for military needs up to two percent of GDP," the political analyst told Pravda.Ru.

The report about Russia's alleged interference in the US presidential election, which was published on April 27, did not reveal any evidence of Trump's collusion with the Russian authorities. Trump does not have to prove that he is an agent of the Kremlin's influence. Instead, he keeps saying that he has been extremely tough on Russia like none of his predecessors. Angela Merkel also said that no one is interested in having bad relations with Russia. Is anything going to change for the better or will it get worse even though the worst cannot be achieved?