UN to say amen to aggression against Syria

Western countries will use a precedent to bypass USSR's veto at the UN Security Council to send a military contingent to Syria. This could be a smart move to make, because in this case military aggression against Syria will be conducted under the guise of international assistance. Donald Trump has already called upon Saudi Arabia and Qatar to send their military to Syria as well. Is Syria doomed? 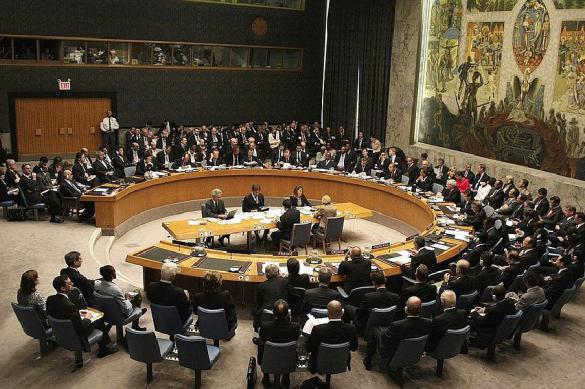 The implementation of such a scenario will be a good punishment for Russia's support of Bashar Assad's regime, The Guardian wrote. The newspaper referred to "Uniting for Peace" Resolution of the UN General Assembly from November 3, 1950. If the resolution receives agreement from nine out of 15 members of the UN Security Council, it will make it possible to bypass the veto right of a permanent member of the Security Council and submit the discussion of a certain issue to the UN General Assembly.

"If the Security Council, because of lack of unanimity of the permanent members, fails to exercise its primary responsibility for the maintenance of international peace and security in any case where there appears to be a threat to the peace, breach of the peace, or act of aggression, the General Assembly shall consider the matter immediately with a view to making appropriate recommendations to Members for collective measures, including in the case of a breach of the peace or act of aggression the use of armed force when necessary, to maintain or restore international peace and security. If not in session at the time, the General Assembly may meet in emergency special session within twenty-four hours of the request therefor. Such emergency special session shall be called if requested by the Security Council on the vote of any seven members, or by a majority of the Members of the United Nations," the resolution says.

The reason for the resolution was the conflict between North and South Koreas, when the fall of the pro-American regime of Seoul seemed inevitable. The USSR had blocked the UN resolution on sending UN's armed assistance to South Korea three times. After appropriate "recommendations," the decision was made, and military contingents from the United States, Australia, New Zealand made the northerners retreat from Seoul and developed an offensive against Pyongyang.

However, after China, with the support of the USSR, deployed its troops to the DPRK, the border between the opposing sides was set on the 38th parallel. The resolution had been used about ten times in different versions, including in 1956, when Moscow sent an army to Hungary to suppress the anti-government uprising. We see that the outcome of the "hybrid" war between the USSR and the West in both cases was decided by the use of military force.

Today, however, it is becoming increasingly difficult to buy vassals' loyalty. It also appears that Donald Trump no longer wants to support the opposition of anti-American governments in the world: media campaigns to discredit, for example, Nicholas Maduro and Daniel Ortega have been declining. Therefore, the main obstacle to the announced plans in Syria is seen in obtaining the required two-thirds of votes at the UN General Assembly. As evidenced, for example, by the vote on the reunification of Russia and the Crimea, most prefer to abstain.

Sergei Ordzhonikidze, chairman of the Russian Public Council for International Cooperation and Public Diplomacy, former deputy secretary general of the United Nations (in 2002-2011), told Pravda.Ru that two-thirds of 192 UN member states will support the position of the United States.  According to the expert, the point of the right of veto is to stop one group of states from imposing their views and positions on another group of states. "In this particular case, they want to make us excuse their aggression in Syria. It was not the UN that made them bomb Syria," he added in an interview with Pravda.Ru.

During the first Cold War, there was a period when the USSR and its allies were putting a lot of pressure on the United States. "The Americans used to have some hard times, when they could collect the maximum of 26 votes at the Assembly.  The Yalta-Potsdam system was written in a very talented way, but these days, it does not fully reflect the situation in the world. The UN Security Council must be reformed, it is necessary to introduce regional leaders there, such as India, Brazil, South Africa," Sergei Ordzhonikidze said. "This would change the situation with the support for Russia, but for now we can count only on China," the expert concluded.

Let us assume that the Western coalition will start bombing Syria under the guise of the United Nations. Is anything going to change on the battlefield? Nothing. European and American politicians have made it clear to everyone - they are not going to help rebuild Syria. Thus, they do not believe that Bashar Assad can be defeated. The West will not be able to punish Russia - it may find a reason to revise the Yalta-Potsdam agreement in favour of the multipolar world. After all, the West does not need any approval from the international community to commit acts of aggression against other countries.