Armenia's Prime Minister Serzh Sargsyan, without fanfare and with very little noise, has done the things that Ukraine had done by means of an armed Maidan revolution. When serving as President, Sargsyan sold Armenia to the West, having abandoned the country's national identity and social policy. The rallies in Yerevan stated as demonstrations in support for the pro-Western course, but then evolved into "pro-Russian" meetings. What can they change and why does Russia take the position of an observer? 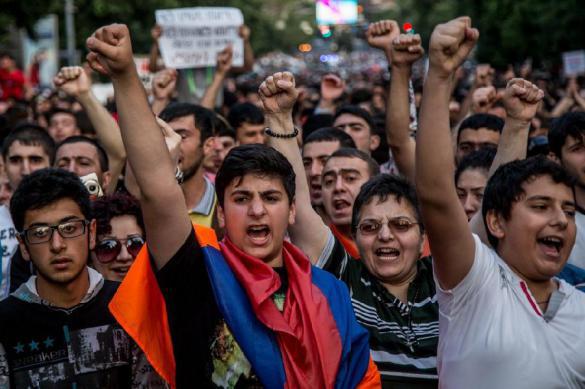 On Monday, April 23, Serzh Sargsyan, the head of the ruling Republican Party of Armenia, was forced to resign amid protests against his election as the prime minister. After the constitutional reform of 2015, Armenia switched from the presidential republic to a parliamentary one. As many said, Sargsyan, as president, conducted the reform to his own benefit only to keep power in his hands as long as possible.

Protests in Armenia began on April 14, when contrary to his promises not to nominate himself for the post of the prime minister, ex-president Serzh Sargsyan was approved on the position at a meeting of the coalition government.

The protests were led by opposition association Elk ("Exodus"), which calls for expanding relations with the West and stands against Armenia's membership in the Eurasian Economic Union (EEU). It was the head of the Elk faction at the parliament, Nikol Pashinyan, who initially became the leader of the protests.

Prior to the threat of losing control over the rallies, Sargsyan held talks with Pashinyan on Sunday, April 22, at which the prime minister said that "the political force that won seven to eight percent at the parliamentary elections had no right to speak on behalf of the people." However, on Monday, April 23, the prime minister resigned.

Arman Boshyan, President of the Yerevan Geopolitical Club, shared his vision of the situation with Pravda.Ru.

"What is happening in Armenia?"

"The protests were growing in size through the involvement of students and schoolchildren. On Sunday (April 22 - Ed.), according to my calculations, there were 40-50 thousand people on the square, the city of Yerevan was paralysed. Many of those who are not interested in politics also joined the rallies."

"Pashinyan called it a "velvet revolution." What are its causes and what do people want?"

"It is believed that the Armenian government is pro-Russian, whereas the opposition is pro-Western, but this is not true. The sitting government is the most pro-Western government in the history of Armenia. Last year, the Armenian authorities signed the Istanbul Convention, which stipulates for the total rejection of national culture, the introduction of juvenile justice and gay pride parades. Armenia signed a document that Bulgaria and Hungary did not sign when being EU members. If these laws are put into practice, they may spark a civil war.

The authorities of Armenia also signed an agreement with the EU on comprehensive partnership, and the parliament ratified it. It goes about the closure of nuclear power plants, about the need to rename cognac to brandy, even though that's a national trademark of ours that we have left after the collapse of the USSR and deindustrialization. In a nutshell, Poroshenko did all that after the Maidan revolution in Ukraine, but the Armenian authorities did all those things quietly and underhandedly.

Armenia, as the EU advised, switched to the parliamentary form of government. Our president now is a British citizen, who has business and property there. The first person, who congratulated him on his election was the Queen of England. Not a single minister can now be appointed here without her generous permission. Armenian oligarchs keep their money in Western banks. There is a Russian army base in Armenia, in Gyumri, but this is all that the Russian influence is limited to in Armenia. There are also close ties between Armenia and Russia, of course, and they cannot cut them."

"How do you think events are going to develop?"

"Regardless of how the situation develops, Armenia will continue running the pro-Western destructive course. The opposition uses the strong social discontent as its primary weapon of struggle. The Armenian government refused to provide material assistance to families with many children, but adopted a law that implies financial support for those who take children away from families. It just so happens that they have money for terror, but no money for family support.

The rallies should have put pressure on the acting authorities, so that Armenia keeps the pro-Western course, but everything developed differently. The people are now opposed to this course, the situation has gone out of control and organisers of those protests did not expect so many people to show up. Yet, the rallies do not propagate any anti-Russian slogans - the protested wanted Sargsyan to step down."

First deputy chairman of the CIS committee in the Duma, Konstantin Zatulin, said in an interview with Govorit Moskva radio station that Russia in Armenia is "an observer who does not want destabilisation there." "An observer should use political means to support legal authorities, but we are not going to send our lawmakers there. Russia does not have such plans, let along the fact that such plans are unacceptable for Armenia."