Defense of Syria's Sovereignty and Self-Determination Receives Support in Cuba

Defense of Syria's Sovereignty and Self-Determination Receives Support in Cuba 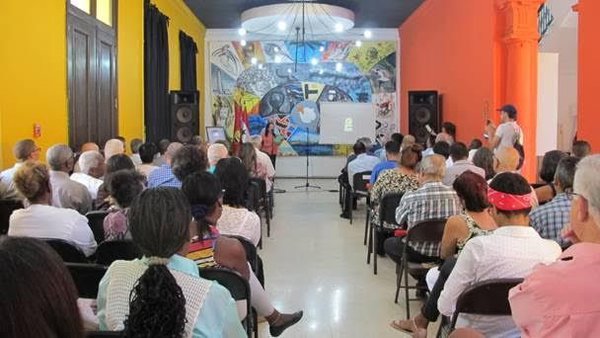 Havana, March 29/2018 (PL) - The organization of Solidarity of the Peoples of Africa, Asia and Latin America (OSPAAAL) celebrated the 55 anniversary of the Revolution of March 8 in Syria and the 71 anniversary of the foundation of the Al-Baath Arab Socialist Party.

Present in the ceremony held in the ALBA House of Culture were representatives from the diplomatic corps accredited in Cuba and from political organizations of Angola, Argentina, Chile, Colombia, Dominica, Gambia, Equatorial Guinea, Iran, Korea DPR, Laos, Palestine, Puerto Rico, Russia, Saharaui Democratic Arab Republic, South Africa, and Venezuela, among other countries. The support to the just cause of the Syrian people in their struggle against terrorism and imperialism was reaffirmed.

In his words, Syrian ambassador Idris Mayya recognized the help granted to his people by Iran, Russia and the countries of Latin America, "with Cuba at the forefront vanguard".

The Syrian diplomat denounced that more than 300,000 terrorists from some 100 countries were attracted to Syria, "once one of the safest and steadiest countries of the world, disseminating destruction and devastation, and attacking the country's infrastructure." Mayya specified that these terrorist actions were aimed against pharmaceutical plants, hospitals, scientific research centers, power plants, and gas and oil pipelines, having committed crimes, assassinations, and massacres, devouring human livers in a way never before seen in history.

"However - he emphasized - some countries demand democracy and practice the opposite; some even ignore its meaning and claim that they (the terrorists) make up a peaceful, moderate opposition."

In turn, Lourdes Cervantes, Secretary General of OSPAAAL, read a message sent to the Syrian president, Bachar al-Assad, which underlines that "the greatest and most sensible contribution made by the Syrian people to the anti-imperialist struggle and tricontinental solidarity has been its own liberating crusade against the perverse and illegal aggression it has suffered during more than 7 years."

"We demand respect for Syria's territorial integrity and claim the unconditional retreat of all invader troops. No more pretexts to sustain their presence in occupied Syrian territory, in open and reiterated violation of International Law," the document adds.

On behalf of the Cuban branch of the Union of Syrian Students, its representative Arowh Mahmoud, explained that the Arab nation "is going through a very difficult crisis, but those difficult moments in the lives of nations make history, and Syria, at this moment, is constructing its history." "The Syrian victories - sentenced Mahmoud - are the victories of all peoples of the world, and they will determine the New World Order."

Diana Castillo, in representation of the Young Communists Union at the Higher Institute of International Relations, also took the floor to reject "the continuous attacks of the United States against the brotherly nation, and to ratify that only the Syrian people and its authorities are entitled to find a solution without meddling or the external pressures they attempt to apply to them."

President of the Syrian Arab Republic and

The Organization of Solidarity of the Peoples of Africa, Asia and Latin America (OSPAAAL) takes pleasure in convey to you, to the Government and Party authorities and to all the Syrian people our respect and most fraternal greetings on the occasion of the 55th anniversary of the Revolution of March 8 and the 71st anniversary of the BAAS Socialist Arab Party, one of the member organizations of our international Executive Secretariat.

Under the leadership of the BAAS Socialist Arab Party, the Syrian people carried out the Revolution of March 8, 1963, constructed a prosperous and united country in full exercise of its sovereignty and self-determination, stood up as barrier to the Zionist expansionism and bulwark of the just Palestinian cause; and has resisted in exemplary fashion the most criminal and extended aggression ever put into practice against a brotherly Arab people by imperialism and its allies.

The greatest and most sensible contribution made by the Syrian people to the anti-imperialist struggle and tricontinental solidarity has been its own liberating crusade against the perverse and illegal aggression it has suffered during the last 7 years. A different and very adverse geopolitical correlation would exist in the Middle East region if Syria had not opposed the Islamic fundamentalist terrorism - dreadful imperial scheme - with all the firmness and resistance it is capable of.

We demand respect for Syria's territorial integrity and claim the unconditional retreat of all invader troops. No more pretexts to sustain their presence in occupied Syrian territory, in open and reiterated violation of International Law.

End the selective criminal bombings with missiles and mortars to Syrian cities by the strongholds of armed terrorist bands, arbitrary extension of a war of aggression, destruction and plundering they already lost!

End the war crimes and crimes of lack of humanity against a brotherly Third World people!

Our firm and permanent solidarity, Syria continues to resist and will inevitably WIN!