The US military have encountered a number of guerrilla attacks in Syria lately. 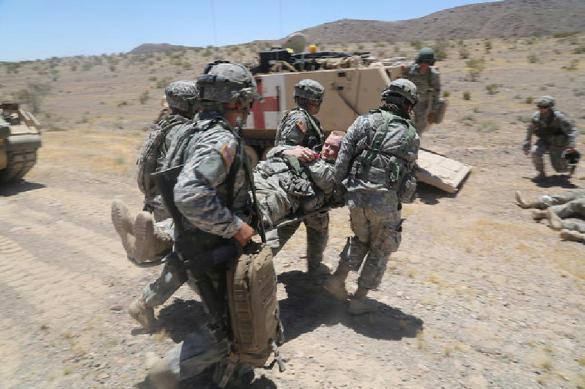 According to messages in Telegram channels, Syrian guerrillas attacked another column of US troops the same day on a highway from Manbij to Raqqa on the eastern bank of the Euphrates. Two US military men were killed with mortar fire, eight were wounded.

It was also said that on April 1, four people, disguised as auxiliary workers, accessed the houses in Al-Shaddadi, where the Americans live, and threw several grenades into the buildings. Seven people were killed, about ten were wounded.

In the northeast of Syria, a US military motorcade was attacked. According to Kurdish sources, the homes of US servicemen were also attacked. WarGonzo Telegram channel said citing the Kurds that there were PMC mercenaries based in the neighbourhood, where the second attack occurred.

Predictably, the Pentagon has not released any officially comment regarding all this information. Yet, it is believed that March was the "deadliest" month for the entire period of the US operation in Syria and Iraq.

"The Syrian people's resistance to the US occupation attacked another Yankee column. The information was confirmed by two of our sources (the Kurdish one and a source from local Arab tribes). The attack was conducted on Hasaka-al-Shaddadi highway, on the road junction that the locals call "the 47th kilometer." The junction is a massive concrete overpass. A land mine was planted alongside the overpass, and the guerrillas exploded at least one armoured vehicle. It was a column of APCs this time. Unlike those Land Cruisers that were bombed several days ago - they were most likely used by US PMCs - armoured vehicles are clearly a military indication, so we are waiting."

"Some data on the losses will somehow surface soon. After all, AFP has recently tweeted some info about killed NATO soldiers. The Americans also have leaks," the authors of the channel added.