C.I.A. Increases Drug Smuggling in Afghanistan To Fund Proxies All Over the World

C.I.A. Increases Drug Smuggling in Afghanistan To Fund Proxies All Over the World 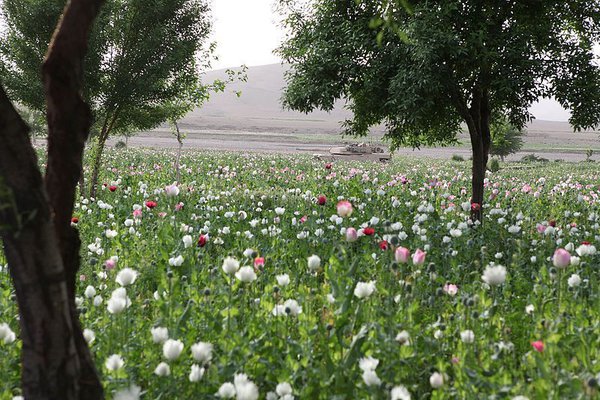 1 Million Women and 100,000 Children Drug Addicts in Afghanistan. "Thanks to the U.S. invasion, Afghanistan is a narco-state today," says the Revolutionary Association of the Women of Afghanistan's representative.

At least one million women and 100,000 children are drug addicts in Afghanistan, said on Sunday (March 11) the head of the anti-drug department at the public health ministry of the Central Asian nation, Shahpor Yusuf, at an event at a drug rehabilitation center in Kabul to mark International Women's Day.

"There are between 900,000 and million women and around 100,000 children who have turned to drugs," said the Afghan official according to the Afghan agency TOLO News. Yusuf added that the children were all below the age of 10.

Marwa Musavi, an Afghan woman for treatment at the center, said that it is useless being there. "When we leave here, again we will turn to drug as long as there are smugglers [and dealers]. They should be stopped. It is the reality."

These numbers much likely indicate that last year's statistics released by the Afghan government is underestimated, which reported that the total of addicts in the country is over three million.

At the same time, the Revolutionary Association of the Women of Afghanistan  (RAWA)  published a letter in Persian, denouncing that more than sixteen years after US-led invasion promising making the Afghan women free, they continue to be killed "in a hell of Afghanistan, which is being set up by the United States and its Taliban, ISIL, Jihadists, and technocrats."

RAWA stated that the Taliban and ISIS are not the only groups in Afghanistan hurting women. "US and NATO troops, and their armed forces in military operations, especially through air strikes in several provinces," destroy homes, hospitals, schools killing civilians, including children.

Civilian casualties are at record levels in Afghanistan: last year, 10,000 civilians were killed in the Central Asian nation, according to United Nations Assistance Mission in Afghanistan (Unama). The UN documented more than 16,290 security-related incidents in the first eight months of 2017, as the Trump regime is dramaticaly increasing air strikes since took power in January 2017,  at record levels.

Friba, RAWA's representative who does not mention her real name as the revolutionary women of Afghanistan work underground, said in an interview with Pravda.Ru in 2016 that the C.I.A. continues trafficking drug from her country. "Drugs were seen as the quickest and easiest way to earn money to fund C.I.A. proxies and paramilitary forces, in different countries." The Afghan activist adds this time: "Thanks to the U.S. invasion, Afghanistan is a narco-state today."

The C.I.A.'s direct involvement in drug smuggling goes back a long time, not only in Afghanistan but also all over the world as in the Iran-Contras scandal. The now dead governor of Kandahar province, Wali Karzai, one of Afghanistan's biggest drug smugglers, had been for a long time on the C.I.A.'s payroll. Wali was Hamid Karzai's brother, former president of Afghanistan picked by the U.S. shortly after the occupation, in 2001.

This figure indicates the meteoric increasing of opium production in Afghanistan since the Washington regime invaded the Central Asian country:

According to the United Nations Office on Drugs and Crime (UNODC), the total area under opium poppy cultivation in Afghanistan was estimated at 328,000 hectares in 2017. it is worth remembering that United States' society remains the world's largest consumer of drugs.

"Thanks to its Goebbels-like lying machine of propaganda, the U.S. has been able to get away with much of its criminal activities, not just in the Afghan war, but in wars in Iraq, Libya and Syria, by lying to its people," Friba tells Pravda.Ru.  "Thanks to the U.S. invasion, Afghanistan is a narco-state today."

In May 2009 Malalaï Joya, a human rights activist, writer and former Parliamentary expelled from office for denouncing face-to-face warlords in the Afghan Parliament, granted an interview to the Brazilian paper O Tempo (Minas Gerais state), in which she denounced that the C.I.A. sponsors drug trade and exert direct control over the routes of the annual global drug industry.

The Brazilian reporter Renata Medeiros totally cut and modified her interview with the Afghan activist. The same day the piece was published, both in the paper and O Tempo's website, I translated and sent it to Joya by email who, angrily surprised about the totally censored publication, immediately sent back the full interview to me.

Below, a passage of Joya's original interview with O Tempo in which the Afghan women's leader quotes the opium matter in Afghanistan, reinforcing Friba's denouncements also relating to the biased international media.

Sorry that I took a long time to answer your questions and hope the answers are satisfactory and not too long.

As I answered the questions in rush, so forgive me for any grammatical errors or any repetition of points in my answers.

[Renata Medeiros] What about the production of opium in Afghanistan? Is this another problem to the country?

[Malalaï Joya] The only sector in which Afghanistan has progressed beyond imagination in the recent years is drugs cultivation and trafficking, and now Afghanistan produces 93% of world opium which shows a 4,500% increase since 2001.

One of the hidden objectives of the war in Afghanistan was specifically to restore the CIA sponsored drug trade and exert direct control over the routes of the U$ 600 billion annual global drug industry. The Afghan narcotics economy is a designed project of the CIA, supported by US foreign policy. So it is very understandable to see that since October 2001, opium poppy cultivation has skyrocketed and there are reports that even US army is engaged in the drugs trafficking.

Drug mafia is in the hold of power and supported by the West. Recently even Western media reported that Wali Karzai, brother of Hamid Karzai, runs the largest network of drugs in eastern Afghanistan and it is a fact that high ranking officials are engaged in the dirty business.

These days Afghanistan is not the only top producer of opium in the world but also the largest producer of cannabis, another illegal crop from which marijuana is derived.

Opium poses one of the biggest dangers for future of Afghanistan.

No comma above has never been published by the Brazilian paper.

When the full interview was published in my book in 2012, O Tempo (Time) removed the "fake" interview from its website. So who does the mainstream media serve? Time has confirmed, among other things, that drug trade really moves the world - and what we are well aware for so long; this mockey of "free Western media" is in general a C.I.A. asset, an Washington regime's accomplice crimes all over the world.