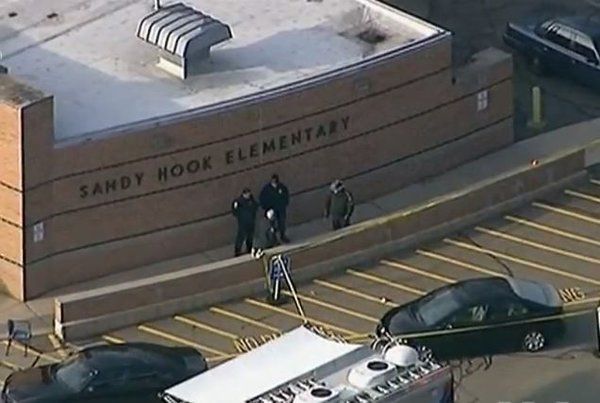 A few days ago, President Trump proposed, as a solution to the ongoing school massacres in the US, to arm teachers with public funds. This has been variously commented on.

A few days ago, President Trump proposed, as a solution to the ongoing school massacres in the US, to arm teachers with public funds. This has been variously commented on. I propose to consider this output as a "fall of inhibitory brakes", in the upper floors of power. It appears to be a general phenomenon. Last June, Senator Hary Reid, a Democrat, when Trump had just won the Republican nomination, in an interview with CNN, after explaining that Trump "does not control his head or language", had urged the CIA to "Give him false briefings. So, he does not understand the difference". Thus, with the most peaceful and serious attitude of the world. You can see here Senator Reid in the video, an old man apparently posed, says something like that. Even the CNN journalist is astonished: "Does that mean to lie to him?".

Just think that a US president like Trump who "can control himself" can order a pre-strike of nuclear missiles against Russia, based on a false CIA briefing; but what about Senator Reid's inhibitory brakes? He completely lost them. One, as militant democrat, can also "think" of such a thing and he can go whisper it to a militant friend. However, to declare it publicly, at CNN, means that it has completely abolished that inner moral (or at least prudence) requirement that prevents the crimes from being proclaimed aloud: because he is obviously advising the CIA to commit high treason, and he himself, Reid, he is guilty of treason.

The exponents of the Deep State anti-Trump were produced in numerous and impressive restraints of inhibitory brakes: FBI leaders, CIA leaders, Democratic senators, "great journalists", did not hold back from lying publicly and blatantly, from creating false files for "Try" the Russiagate, from threatening the president's death, to tread the loyalty that is owed, after all, to the institution. In addition, they did it openly, in view of the public so to speak.

Such a huge abandonment of every inhibition can only have one cause: the habit of carrying out crimes with impunity. Knowing how to kill people thousands of miles away, without ever having risked to respond of them, indeed - without ever having to respond in a sense by statute, being approved by the established power, the normal modus agendi of the Superpower - has obtuse the consciences to the point that they betray their criminal wills, criminally relevant, without even realizing it.

This callus was born from September 11th.

People who killed 3 thousand of his fellow citizens, accused others and got away with it, has not the slightest hesitation in killing and destroying entire populations, as they did in Iraq and Afghanistan, and there are doing in Syria.

However, so they assumed the figure of the criminal who reveals himself or herself by saying things that a normal person does not even think. Nevertheless, if we look around, we see the same in our environments. Especially the social media are the theater of the loss of verbal inhibitory restraints by individuals of abject moral level. They hide behind anonymity to say horrible things, for example, for example about Mrs. Boldrini [the President of the Chamber in the Italian Parliament - translator's note]. In addition, Mrs. Boldrini who for her part loses the stirrups and mobilizes the DIGOS [Italian special police] for a scary and disgusting phenomenon, yes, but that touches anyone who exposes himself on the web - not excluding myself. In any case, the "hate speeches", which give the excuse to the constituted power for censorship, are effectively the sign of an educational, moral and anthropological degradation of (I fear) the majority of society. Here too the loss of brakes inhibitors testify the cessation of judging and controlling, the interior abolition of the ethical instance or even just from good education or courtesy.

We learned from Vittorio Feltri, who wrote on Libero [Italian newspaper of which Feltri is director - translator's note], that Mario Calabresi - yes: the director of La Repubblica [an other well knew Italian newspapaer - translator's note], that, "instead of arguing the reasons that lead him to publicly contest my observations offered to readers, he bombed me half morning with personal insults, using SMS in series and transmitted obviously with the mobile phone. A succession of gripes alternating with insults typical of a bully and hysterical boy. Nothing dramatic. I am used to dealing with the rude and even the peasants. [...] I am ready to print the messages that the director of La Repubblica has sent to me on Libero. To read them, it's funny. They also are useful to understand the cultural stature of the author of them."

Now, even this phenomenon indicates an unheard of loosening of the inhibitory brakes. That a young director of the illuminated left hate the old Feltri, agree. But that his fury overcomes the frame of the political-journalistic polemic to lead to private insults via SMS, says about the collapse in the rabid infantilism of those who feel they have lost arguments and feel endangered their power. Not only: the system of the power entrusted to them by the newspaper.

It happened before the Great War

Now: this kind of delirium, general anger, the blatant abandonment of masses and elites in the bad infancy, is a precise "collective mood" (état d'esprit, Guénon would say) - which is a prelude to and makes European tragedies inevitable. It possessed the souls of the ruling classes just before the Great War. In The Enchanted Mountain, Thomas Mann (who was also possessed by it and recognized it) tells how it showed up at Davos' luxury hotel for people sick with tuberculosis:

"... In the Berghof something began to wander, a spirit, of which Castorp [the protagonist] the direct descendant of the demon we mentioned the evil name ... He had studied that demon, even finding within himself suspected possibilities to participate widely in the monstrous service that his contemporaries dedicated to him. [...] He noted with fright that he too, as soon as he let himself go, was, in appearance, with the word, in his behavior, the victim of an infection to which nobody escaped around him.

"What was it about? What was in the air? - Craving of fights. Irritation with threat of crisis. Unspeakable impatience. General tendency to vengeful bickering, outbursts of rage, even to the fight. Strange quarrels, uncontrolled quarrels broke out every day between individuals or entire groups, and it was significant that the uninvolved, instead of being nauseated by the condition of the furious and interpose, instead took part sympathetically, and mentally let themselves be taken by delirium. They fizzed and trembled. Their eyes flashed aggressively, their lips twisted with fury. The right to envy the unleashed, the call to scream. A dragging desire to imitate them tortured the body and the soul and those who did not have the strength to withdraw into solitude were hopelessly drawn into the vortex. The vain conflicts, the mutual accusations in the presence of the authorities - struggling to put peace, but they also frighteningly easy to the screaming rudeness, all of this was accumulating at the Berghof (...) ".

We are in full psychic contagion. And it is useless to deny that it infects in some way each of us, "irremediably attracted to the vortex".

Even in 1913-14, the media played an odious part in spreading the psychic contagion:

"Certain British journalists were accused by their contemporaries of deliberately poisoning the Anglo-German relations and creating with their alarmism (scaremongering) such a climate in public opinion that the war between the two Great Powers became inevitable" - Scaremongers: the  Advocacy of War and  Rearmament 1896-1914 by A.J.A.  Morris, London 1984).