November 8th, 2010 marked the barbaric and violent dismantling of the Sahrawi protesters ´camp in the area of Agdeim Izik located east of the city of El-Aaiun, the capital of occupied Western Sahara. Various Moroccan security forces, the intelligence services, the auxiliary forces, the Moroccan army, the Moroccan gendarmerie and the Moroccan police performed the attack on this peaceful protest camp. Hundreds were arrested and badly tortured while dozens were abducted and taken to secret detention centers to undergo severe torture. Among these victims was: Mohamed El-Ayoubi.A peaceful militant and a Saharawi citizen whose only crime was to be a Sahrawi! The Moroccan military judiciary pressed charges against him and ordered his transfer to the city of Sale’s local prison. His group was of 24 innocent Saharawis who were to later to be blamed for the death of some Moroccan law enforcement agents who died accidentally during the dismantling of the protest camp.

Who is Mohamed EL-Ayoubi? Why involved in Gdeim Izik camp?

Mohamed El-Ayoubi is a Sahrawi political detainee and a prisoner on conditional release due to health problems. He is still single and unemployed.  He was born in 1955. On November 8th, 2010, the Moroccan army arrested him during the violent and bloody dismantling of the Gdeim Izik peaceful protest camp.

Mohamed was one  of the many thousands camp resident who to chose to displace themselves away from the city Moroccan controlled city El-Aaiun in Western Sahara. This camp was built 15 km away from El-Aaiun, from October to November 2010. The camp had been built in the desert to protest the poor socio-economic conditions and counted up to 25,000 people. The clashes that accompanied his evacuation were the most serious since the 1991 ceasefire: eleven members of the security forces and two civilians were killed.

After the arrest of Mohammed al-Ayoubi and his fellow countrymen by the Moroccan military, the military investigating magistrate ordered the incarceration of Mohamed El-Ayoubi into the local prison of Salé 2 on November 13th, 2010. During that period, Mohamed El-Ayoubi was subjected to all forms of cruel ill-treatment practices and to systematic torture ranging from being isolated in solitary confinement to the deprivation of all the basic rights.  As a result of torture and the rape during and after the dismantling of the Gdeim Izik camp and while being in the local prison Sale2, he was transferred to the Ibn Sina Hospital in the period between December 2010 and February 2011 for treatment in an attempt to cover up the impact on his deteriorating health due to the brutal torture at the hands of Moroccan army forces and the guards and staff of the Salé 2 prison.

According to Human Rights: Moroccan security forces repeatedly beat and abused people they detained following disturbances on November 8, 2010, in the Western Sahara capital city of El-Ayoun, Human Rights Watch said today. Security forces also directly attacked civilians, a Human Rights Watch investigation showed.
Again, this was a clear violation of Geneva´s Fourth Convention where it says: Article 76. Protected persons accused of offences shall be detained in the occupied country, and if convicted they shall serve their sentences therein. They shall, if possible, be separated from other detainees and shall enjoy conditions of food and hygiene which will be sufficient to keep them in good health, and which will be at least equal to those obtaining in prisons in the occupied country.

What do International Observers say about the trial and the conditions of the detention?

A European ONG sent one of its members as an international Observer to attend the trial. Tone Moe states “the usage of solitary confinement can lead to irreparable health problems when it exceeds 15 days. This group has now been held in solitary confinement for 72 days. The prisoners was deprived of all their belongings, and some of them reportedly slept on the concrete floors of their cells, wearing the clothes they were forcibly transferred in for weeks before their belongings were returned."
A lengthy report can be found here:(https://www.prison-insider.com/files/ec44db9f/health_status_prisoners_gdeim_izik11112017_1.pdf).

Human Rights interviewed seven Sahrawis detained following the November 8 violence and then released. All alleged that the police or gendarmes abused them in custody, including in some cases beating them until they lost consciousness, throwing urine at them, and threatening them with rape. Lawyers representing those who remain in custody told Human Rights Watch that at least one detainee told an investigative judge that he had been raped in detention, while many others told the investigative judge and prosecutor about beatings and other abuses they allegedly endured in custody.

Temporary release: Between international pressure and an attempt to embellish the Regime’s ugly face!

Saharawi detainees and prisoners of the Gdeim Izik group were illegally imprisoned, tortured and treated inhumanely. In fact, what Morocco calls their “confessions” were all obtained through torture and by force.
Mohammed al-Ayoubi has been released since mid-December 2011 due to his critical health condition. The release of Mohammed El-Ayoubi came as a result of the suspension of the Sahrawi political prisoners Gdeim Izik group for their open hunger strike between 31 October 2011 and 07 December 2011,  and which lasted 38 days.
No doubt, Mohamed’s case is not unique nor the only case of injustice and oppression. For decades, the Saharawi people have been oppressed in the occupied areas. Torture is a part of Morocco’s policies in the occupied area, as well as forced disappearances.


The Verdict: A trial described as a Farce!

The Moroccan judiciary issued a harsh and unfair verdict against the former Saharawi political detainee Mohamed El-Ayoubi for he was sentenced to 20 years at a military trial on February 17, 2013. The same verdict was issued by the Court of Appeal in Salé / Morocco on December 20th, 2017.

The trial was In extremely difficult conditions. Saharawis came in hundreds, despite the long distance, to support the detainees. The exercise of the right of defense and the right of expression has been made very complicated, whether for defense lawyers or for the Saharawi community who was present there to support the Gdeim Izik group. The Mekhzen (Moroccan Regime) sent its agents and mobilized its civil society to tarnish the Gdeim Izik group and to launch an anti- Saharawi campaign. Many of the hired guns came to attend the trial inside the court and outside the court in order to attack, assault and harass the Saharawis.
Mr. El-Ayoubi could not attend it as he was hospitalized in a clinic in Agadir.  The Moroccan judge decreed to separate his case from other cases of the same group for a separate trial. The sentencing took place later and he was the same as ruled by the military court. Mohamed El-Ayoubi stated: There is no fair trial in Morocco. What can you expect from an oppressive regime? ¨.

Mohamed El-Ayoubi suffers from several diseases resulting from torture and ill-treatment during the period of his arrest and his incarceration in the local prison of Sale 2.

He has diabetes, renal insufficiency, and hepatitis. He also has to go through dialysis treatment sessions each week for his failure.  He recently underwent an amputation of a finger on his right foot. In addition, Mohamed El-Ayoubi suffers a lot at the level of the right shoulder after all the beating, abuse and physical torture he endured in late 2010 and throughout 2011while in detention.
Again, Geneva Fourth Convention says Cleary: They shall receive the medical attention required by their state of health..... Article 143¨. 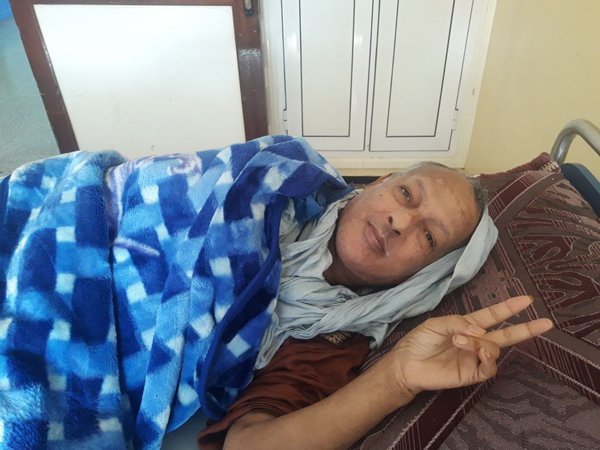