It is the fantasy, dare I say wet dream, of all Hillary-haters and all Trumpsters everywhere.
Donald Trump is going to take down the deep state.  A stunning military coup. Truth.  Straight down.  As you read these very words there are over 1,000 sealed indictments for Hillary Clinton and other deep state operatives.  Further, the US courts cannot be trusted as they are riddled with bought and corrupt jurists, so military tribunals will be used to try these enemies of the state.  It's going down... 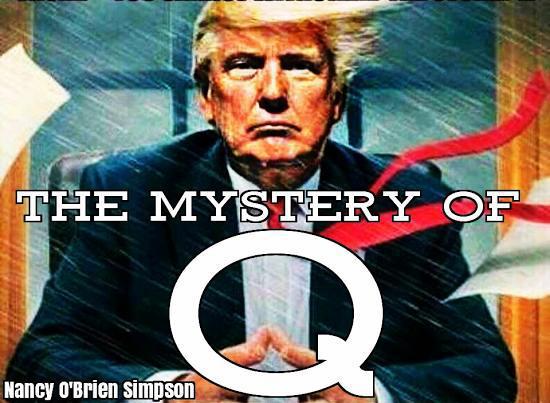 Q is an anonymous poster on 4chan.  Q began posting in late October.  His posts are in the form of questions, short statements, long lists of connected important people/things, obscure acronyms, and occasionally random series of characters and symbols.  Q refers to these clues as "breadcrumbs" and claims they are releasing the "biggest insider drop in the history of the world".

Here's a pastebin that supposedly has collected Q's various postings

Depending on what side of the political minefield you are standing on Q is either a raving lunatic of the conspiratorial bend, or Q is sheer genius, an insider telling the world that the deep state is coming down.

Now, in this wide world of cyber, why would Q rise to the top of the truther/Trump/conspiracy world? There have been a number of international & national happenings in the past several weeks that seem to draw some vague correlations between "Q's" claims and recent news. Things that get the troops all riled up and are really of some consequence.

One is The NY Times released an article on November 12, titled "Security Breach and Spilled Secrets Have Shaken the N.S.A. to Its Core", in which is written the following paragraph:
Fifteen months into a wide-ranging investigation by the agency’s counterintelligence arm, known as Q Group, and the F.B.I., officials still do not know whether the N.S.A. is the victim of a brilliantly executed hack, with Russia as the most likely perpetrator, an insider’s leak, or both.
Until now "Q" had been just another conspiracy theorist, but with this article "Q" is claiming the NY Times is attempting to directly attack their credibility by claiming they are part of the NSA.  Conspiracy theorists (or people who see through the propaganda of the corporate controlled MSM) are putting together the pieces of the puzzle and finding a lot to hang their (tinfoil ?) hats on.

There is the matter of the +++ that Q signed off with, he wrote on November 6, "Nothing is random.  Everything has meaning. +++"


Seven minutes later Trump wrote a tweet and ended it with +++.  Now, even for those who know for a fact that Q is a larper, this is a pretty weird "coincidence".

Then there was the airplane.  Q keeps posting these little weird breadcrumbs that tend to be kind of true.  There was the photo from an airplane posted by Q, and someone figured out the angle from the photograph matched the coordinates and exact piece of land Air Force One was flying over, at pretty much the exact time the photo was posted.  Leading one to believe Q was on Air Force One.

Then there have been breadcrumbs about Saudi Arabia and indictments that have proven to have  some veracity.

The MSM has been utterly silent about Q.  Pravda may be the biggest news source to break the story other than "Metro" with a poorly written story debunking Q, however, it did put it out there.

So, who is Q?  Anyone's guess.  Could be a larper.  4chan are anonymous forums. You can hide behind a username. LARPing is Live Action Role-Playing, where you pretend to be someone else in real life. A LARPer in this context is someone who claims "I am a high level official in the Department of Justice" without providing evidence and then say something like, "The DoJ will announce charges against the CEO of Comcast tomorrow." Because no proof is provided, some people will say that the poster is role-playing as the person they claim to be.  However, there is just too much insider stuff for Q to be a total zero.

These are names that have been thrown out as possible Q authors: Trump himself,  Roger Stone, Steve Bannon, Dan Scavino Jr., Anthony Scaramucci, Michael Flynn, and many think it is the ex-CTO, Nash Borges, of the Global Engagement Center who resigned this September.

"The Obama administration established the Global Engagement Center in 2016 to counter ISIS’ various online messaging efforts, directing the new office to use data and to work with international partners in a bid to undermine extremist propaganda more effectively than State’s previous such unit, the Center for Strategic Counterterrorism Communications. GEC’s toolbox included various outreach efforts, including highly targeted ad buys on Facebook.

Last year, the 2017 National Defense Authorization Act gave the GEC an additional mission: fighting “foreign propaganda and disinformation directed against United States national security interests and proactively advance fact-based narratives that support United States allies and interests.” The Act, which became law in December, allowed the Global Engagement Center to ask the Pentagon for $40 million, bringing its total 2017 spending to about $80 million. About $60 million of that was to be used to counter Russian influence operations; about $19 million was aimed at ISIS.-- Defense One September 2017

This little baby can manipulate the MSM anyway it wants, and perhaps Borges no longer wanted in on that game.

However, it's probably someone on the inside playing.  Even if it is all fantasy, there is a certain seeding of consciousness that is occurring with those who "believe".   There is a visceral yearning for the take down of the deep state.  Greg Grandin writes in The Nation:

The deep state may be ..."an almost hereditary covert caste, running from the men who in the early days of the Cold War set up the modern national security state to the elite who make up today’s “intelligence community.” In 1964, Random House published the bestselling The Invisible Government, by journalists David Wise and Thomas Ross (here’s the CIA’s declassified review of the book, which takes exception to its thesis). More recently, Michael Glennon’s National Security and Double Government updated the argument.

Peter Dale Scott was the first, as far as I know, to use the phrase “parapolitics” and “deep politics” to discuss what is now described as the deep state, and he’s the author of numerous books on the dense connections between illegal drugs, covert action, and finance... I remember that Iran-Contra really did happen. As Michael Parenti likes to point out, conspiracies do in fact exist, both in legal theory and in politics: Watergate, Iran-Contra, the savings and loan scandal of the 1980s/90s, “described by the Justice Department as ‘a thousand conspiracies of fraud, theft, and bribery,’ the greatest financial crime in history” (that we know of)."

Ms. Simpson was a radio personality in New York.  She was a staff writer for The Liberty Report.  A PBS documentary was done on her activism for human rights.  She is a psychotherapist and political commentator.