Russia is back to the Middle East, seriously and forever

In one of our articles from last year, Pravda.Ru suggested that Syria was only the beginning, the first and not the last step on the way to build an extensive system of Russia's presence in the Middle East. The next step in this direction should be the establishment of strong ties with Lebanon - a country that used to be an integral part of the Greater Syria. Today, there are reasons to assert that Russia is going in the right direction. 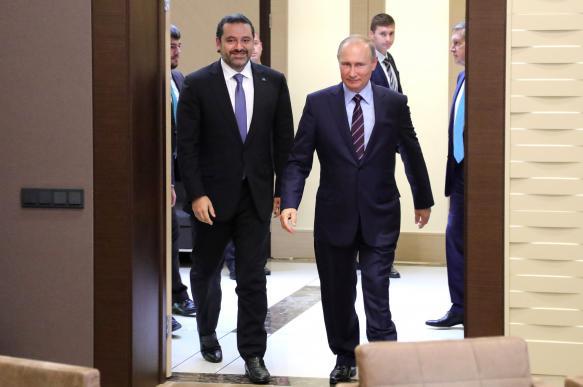 Prime Minister of Lebanon Saad Hariri has recently visited Russia. He held talks at the government level, met with the head of the Russian Cabinet of Ministers Dmitry Medvedev and then headed to Sochi for a meeting with Russian President Vladimir Putin.

Saad Hariri named the topics of his talks in Moscow and Sochi prior to his trip to Russia. The topics of the talks clearly indicate that Lebanon treats Russia seriously and understands that Russia is an ally and a partner. First and foremost, Hariri came to Russia to discuss supplies of Russian arms and military equipment for the Lebanese army.

Without Lebanon, there is no Syria for Russia

Just a few days before Hariri's visit to Russia, the Lebanese military carried out a successful operation against Islamist militants on the Lebanese-Syrian border. The operation demonstrated the effectiveness of Lebanon's actions on the antiterrorist front. It may well serve as a basis for obtaining substantial military assistance.

In Sochi, the Lebanese prime minister and the Russian president talked about military assistance for Lebanon, as well as prospects for the development of such relations between Russia and Lebanon.

However, the potential of the Russian-Lebanese cooperation goes far beyond the framework of the defence industry. Lebanon, which, like Syria, is situated in the Eastern Mediterranean, can give Russian companies access to rich hydrocarbon reserves on the shelf.

Saad Hariri brought relevant proposals to Moscow to get Russian oil and gas companies involved in the exploration and development of deposits in the Lebanese sector of the Mediterranean Sea. "There are companies engaged in the gas sector. There are real opportunities to succeed in this project, and we call on Russian companies to come to Lebanon," Hariri said at the final press conference.

Knowing perfectly well that the work on oil and gas projects will require the creation of appropriate infrastructure, the Lebanese Premier invited investors from Russia to Lebanon. They may be interested in the modernisation and reconstruction of the transport network, port facilities, the energy industry of Lebanon and housing construction.

One should not refuse from the possibility to create an industrial and logistic base in Lebanon for the post-war reconstruction of Syria. "When the political settlement ends in Syria, Lebanon may become a platform for the restoration of Syria," Hariri suggested.

Lebanon if a jewel of the Middle East

In short, Lebanon has all chances to be Russia's most advantageous partner in the region in military-strategic, economic, energy, transport terms.

Lebanon is the largest international financial and banking centre, through which it is possible to establish fruitful cooperation with financial and business communities of the Arab world. For Russia, this may be of particular interest: against the backdrop of Western sanctions, expanding access to financial and investment resources of the Arab world is an urgent need for Russia, and it is with the help of Lebanese bankers that Russia can find the best solution to this problem.

Along with the above-mentioned factors of cooperation in the military-technical and economic spheres, the symbiotic relationship between Lebanon and Syria is of great importance. The two countries used to be one, but the West made it collapse. The internal conflict in Syria is deeply rooted in the history of Lebanese-Syrian relations. It was the Assad regime - Hafez Assad back then, the father of the current president of Syria, - whom the West accused of interfering in the affairs of Lebanon, which marked the beginning of a broad anti-Syrian campaign that continues to this day.

Therefore, responsible attitude to the process of stabilisation in Syria requires a lot of attention to the development of the situation in Lebanon. Russia has been demonstrating this responsibility by developing broad cooperation with Lebanon and expanding the peacekeeping mission in Syria.

It is quite obvious that Russia has been building up its positions in the Middle East with great knowledge of regional realities. Russia is back to the Middle East, seriously and forever.