Turkey and Israel challenge the rule of Russia's Gazprom in Europe

Turkish President Recep Erdogan is playing a complex diplomatic game. On the one hand, he assures his Russian counterpart Vladimir Putin of "friendship forever" between Turkey and Russia while implementing the Turkish Stream project with Gazprom. On the other hand, Erdogan conducts negotiations with Israel, Qatar and Central Asia to undermine positions of the Russian gas giant in Europe. Turkey and Israel will soon start building a gas pipeline from the shores of the Jewish State to the countries of the European Union. Natural gas from Israel gas is expected to flow to Europe through the Azerbaijan-Turkey Trans-Anatolian Gas Pipeline (TANAP). Now it becomes clear why Ankara zealously supported Qatar in its cold war with Gulf monarchies. If Bashar Assad is removed from power in Syria, Erdogan expects to revive the project of building a gas pipeline from Qatar to Europe via Turkey. 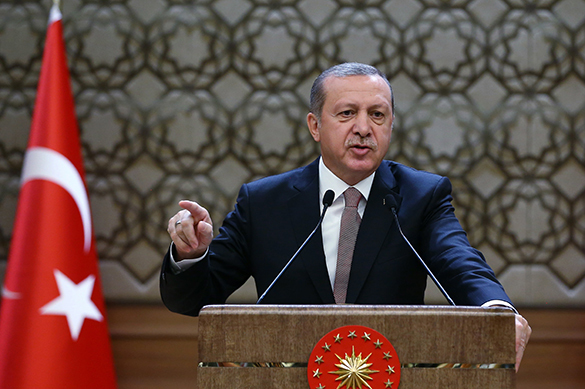 Turkey has been deepening its cooperation with Russia in military and energy areas. "Turkey's membership at NATO will not stop Ankara from buying S-400 anti-aircraft missile systems from Russia," Turkish Ambassador to Moscow Hüseyin Dirioz stated on July 14. In addition, Minister of Energy and Natural Resources of Turkey, Berat Albayrak, said that the joint implementation of the construction of the Turkish Stream gas pipeline strengthens the strategic partnership between Russia and Turkey.

At first glance, it may seem that Turkish President Recep Erdogan is reaching out a helping hand to Moscow. However, during the Ottoman Empire, sultans would often surprise Europe with their unpredictable foreign policies.

In the 21st century, little has changed in Turkey's policy. Six years ago, Erdogan was at cold war with Israel. Turkey expelled Israeli ambassador from the country after Israeli special forces seized  Turkish vessel Mavi Marmara off the coast of Gaza. Presently, this dispute has long been forgotten, and Ankara and Tel Aviv cooperate as strategic partners, particularly in the energy sector. Turkey and Israel agreed to sign an agreement this year on the construction of a pipeline to supply natural gas from Mediterranean deposits to EU countries. This was announced by Minister of National Infrastructure, Energy and Water Supply of Israel, Yuval Steinitz.

Steinitz said that one pipeline will be built to Turkey and further to Europe, while the other one will go via Cyprus and Greece to Italy. Most likely, the agreement on the subject will be signed during the visit of Turkish Energy Minister Berat Albaiur to Israel in the second half of this year.

According to experts, the pipeline is to be built from the Israeli field "Leviathan" on the shelf of the Mediterranean Sea to the coast of Turkey and further to the Trans-Anatolian gas pipeline TANAP, from where the pipeline will reach Europe. Noteworthy, Turkey plans to use TANAP to deliver Azerbaijani gas to Europe too.

It is worth mentioning that the Trans-Anatolian natural gas transportation project (TANAP) is owned by the following shareholders: SOCAR (State Oil Company of Azerbaijan), Botash (Turkey) and BP (the UK). For the European Union, TANAP is a priority gas corridor, which is expected to end the monopoly of Russia's Gazprom on the European market.

In the future, Ankara and Brussels plan to connect Central Asian republics to TANAP as well. Turkmenistan, Uzbekistan and Kazakhstan - the countries that have extensive gas reserves - are ready to supply their blue fuel to Europe via TANAP bypassing Russia. The only obstacle to implement the project is Russia's and Iran's refusal to give the go-ahead for the construction of the Trans-Caspian pipeline along the Caspian seabed. Without this permission, natural gas from Central Asia will not be able to reach the TANAP system.

As for the above-mentioned "Leviathan" deposit in Israel, it is located on the shelf of the Mediterranean Sea, 130 kilometers from Haifa. Natural gas lies at a depth of over 5,000 meters, the depth of the sea in the area of the field reaches 1,645 meters. "Leviathan" is the largest gas field in Israel: its reserves are estimated at 620 billion cubic meters. The US Geological Survey believes that unexplored reserves of the field may reach about three and a half trillion cubic meters.

In April 2017, energy ministers of Israel, Cyprus, Greece and Italy signed an agreement on the construction of a gas pipeline to transport Israeli gas to the European Union. The cost of the project makes up approximately six billion euros. The pipes will connect deposits in Israeli and Cypriot economic waters with terminals in Greece and Italy.

The successful implementation of the project will reduce Europe's dependence on Russian natural gas. According to experts, the pipeline is unlikely to enter service before 2025.

In March 2016, however, the Israeli Supreme Court blocked the project as an unconstitutional deal concluded between the government of the Jewish State and a consortium of gas companies led by the US-based Noble Energy. The agreement provides for the development of gas fields on the shelf of the Mediterranean Sea. As Prime Minister Benjamin Netanyahu said, "the court decision seriously jeopardizes the development of Israel's gas reserves."

As for Erdogan's smart energy plans, they stretch far beyond the shores of Israel. In the future, Ankara intends to use TANAP to transport gas not only from Azerbaijan and Israel, but also from Qatar. Turkey's protection for Qatar in the recent cold war with rich Arabian monarchies led by Saudi Arabia was not incidental. Erdogan sent troops to Qatar, making it clear that Turkey would support Qatar militarily if need be.

Qatar has world's largest reserves of natural gas in the world: they reach 25 trillion cubic meters. Such reserves will allow this tiny state of the Persian Gulf to produce gas for 160 years. At present, Turkey and Qatar are in the process to analyze possibilities to reanimate a previously unrealized project for the construction of a gas pipeline from Qatar to Turkey. The only obstacle on the way is the sitting Syrian administration of Bashar Assad, who remains strongly against the project.

Nevertheless, Ankara and Doha hope that the Assad regime would soon fall, and the new Syrian administration wold allow the construction of the Qatari pipeline to Turkey via the Syrian territory. Thus, today's Syria decides the fate of the division of the gas market in the world. For the time being, Bashar Assad unwittingly acts as the guarantor to maintain status quo on the Gazprom-dominated gas market of Europe. As long as Assad stays in power, the Qatari pipeline will not be able to reach Turkish shores.