The first meeting between Russian President Vladimir Putin and his US counterpart Donald Trump in Hamburg has not brought any grandiose results. The key issues on the agenda of the meeting were the crisis in Syria, the struggle against international terrorism, issues of strategic stability and bilateral relations. 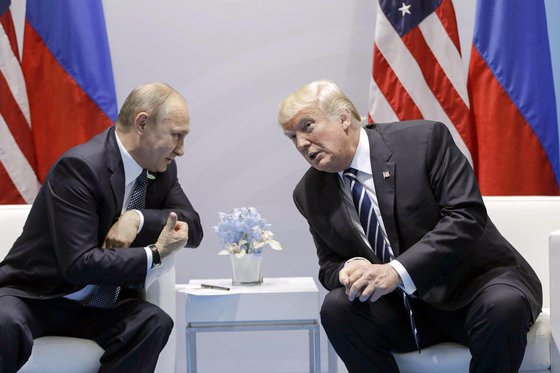 The meeting was supposed to last for only 30 minutes, but the two presidents extended it to two hours.

Interestingly, it was Donald Trump, who approached Putin first. He was also the first to reach out his hand for a handshake at the moment when Putin was taking to Japanese Prime Minister Shinzo Abe. While shaking Putin's hand, Trump put his other hand on Putin's elbow. At the end of the brief conversation, Trump put his hand on Putin's shoulder in a friendly gesture. Dmitry Peskov, Putin's official spokesman, later said: "They shook hands and said that they would soon hold a separate meeting, that they would soon see each other again."

However, the above-mentioned friendly gestures do not abolish all the difficulties in the relations between Russia and the United States.

Peskov noted that before going to Hamburg, Putin took note of Trump's statements about Russia's allegedly destabilizing influence. "Of course, Putin was informed about all statements that Mr. Trump made the day before in Poland. We also informed the president about the things that other Washington officials made, and Mr. Putin takes all this into consideration," Peskov said.

The main outcome of the meeting, of course, was the agreement on a ceasefire in Syria. The Syrian issue, along with economic sanctions, remains the main stumbling block in the Russian-American relations. Any progress in this direction can be considered great success. The ceasefire took effect on July 9 at 12.00, Damascus time.

Afterwards, Vladimir Putin shared his impression of his conversation with Donald Trump. "I had a very lengthy conversation with the President of the United States. There were a lot of questions to talk about - Ukraine, Syria, other problems, some bilateral issues. We again returned to issues of fighting terrorism and cyber security," Putin said.

Russian Foreign Minister Sergei Lavrov, who also took part in the meeting along with his US counterpart Rex Tillerson, also said afterwards that the meeting between the two presidents was constructive. He noted that the meeting confirmed the intention to the two leaders to search for mutually beneficial agreements.

"The president are being driven primarily by national interests of their countries, and they understand these interests as a search for mutually beneficial agreements, rather than a game of confrontational scenarios," Lavrov said.

It is worthy of note that Vladimir Putin also shook hands with US First Lady, Melania Trump, with whom he talked about women's rights.