US President Donald Trump has recently held talks with Chairman of the People's Republic of China, Xi Jinping. Deputy National Security Adviser Kathleen McFarland stated on Fox TV channel that Trump convinced his Chinese counterpart that North Korea was a threat to the world. According to her, Trump could convince Xi Jinping that North Korea was a burden and a threat not only to the USA, South Korea, Japan and Russia, but also to China. 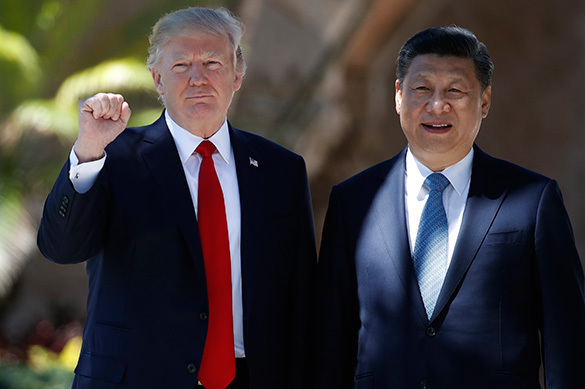 The meeting between Presidents Donald Trump and Xi Jinping took place on April 6-7 in Florida. Kathleen McFarland noted that the US was going to give China some time to try to persuade Pyongyang of the need to curtail the nuclear program. Washington and its allies will thus continue putting economic and diplomatic pressure on North Korea.

The US government has conducted a "broad study" and prepared a package of interesting proposals, sanctions, diplomatic steps, second-order sanctions, as well as options for military action. The emphasis is put on China, which, according to Washington's plans, will be able to persuade North Korea (the DPRK) of the need to abandon its missile tests. Earlier, Trump said in an interview with The Wall Street Journal that he offered China more favourable terms of trade in exchange for assistance in countering North Korea.

At the same time, China threatens to impose an oil embargo on North Korea in the event the hermit kingdom conducts another nuclear test.

According to publications in Chinese mass media, Pyongyang's steps indicate its intention to continue the development of the nuclear missile program. If a nuclear test is conducted, China will stop supplying oil to North Korea and will support the imposition of new sanctions against the DPRK.

The US has long been trying to force China to cease shipments of petroleum products to North Korea. Donald Trump was ready to turn a blind eye to those requirements, if China could help the US put more pressure on North Korea and refrain from cooperation with Russia.

Interestingly, in the autumn of 2016, when a Republican candidate for US presidency, Trump promised, in case of his election, to impose tariff rates on China for manipulating the rate of the yuan. He said he would order his Secretary of Commerce to call China a currency manipulator and threatened to impose tariff rates on any country that downgraded its currency to take advantage of the United States.

Trump promised that he would initiate trade lawsuits against China and follow the implementation of WTO rules.

Pravda.Ru requested an expert opinion from Andrei Ostrovsky, Doctor of Economic Sciences, professor of the Institute of Far Eastern Studies of the Russian Academy of Sciences.

"President Donald Trump could convince President Xi Jinping that North Korea was a burden for Beijing rather than a trade partner. Do you think China could cooperate with the US only to be able to contain the nuclear state of the DPRK?"

"Trump can say anything, but it does not mean that China will leave North Korea to the mercy of fate. China's position on this issue is clear and unshakable, similarly to the position of other countries. Most importantly, if they want to resolve the crisis on the Korean peninsula, they need to hold six-party talks, in which North and South Koreas, the United States, Japan, Russia and China would participate. To say that Trump persuaded Xi Jinping to abandon North Korea is either an obvious exaggeration or simply falsification of information.

"The fact is that Xi Jinping's visit to the USA was very unsuccessful. The two sides have not been able to solve one single serious issue, and they are unlikely to resolve them in the future. Trump, in the presence of Xi Jinping, announced that he struck a blow on Syria. He made the Chinese leader feel very uncomfortable. Xi Jinping, through Trump's fault, "lost his face." The Chinese will never forgive such things to anyone. Trump humiliated Xi Jinping. It is hardly possible to say that they have agreed on something with China.  The Americans can say anything, but I have not heard anything like this from China. I only know that a representative of the Chinese Ministry for Foreign Affairs spoke to disavow statements from American representatives."

"But still, Washington will not leave Beijing alone on that."

"What do you mean it will not leave Beijing alone? Beijing will not leave Washington alone either. There are very serious questions about the relationship between China and the United States. I believe that there are four serious problems in the US-China relations. The first one is about trade and economic relations, an imbalance in foreign trade between China and the United States (about $300 billion a year). The second one is the issue of Taiwan. The third problem is the problem of disputed islands in the South China Sea. The fourth one is the Korean problem. They all need to be resolved, but they are not going to be resolved in the foreseeable future.

"Nevertheless, economic problems are much more important than political ones. China's economic dependence on America and America's dependence on China is very strong. In particular, if we take the total volume of China's foreign trade, then America's share makes up 14 percent. The share of Russia, for example, is less than two percent. Economy defines politics. Accordingly, all these issues are connected with economy. America can not do without Chinese goods. In addition, Chinese investments in the US economy last year exceeded those of the USA."

"Do you think Trump can put pressure on Xi Jinping or not?"

"China will not abandon Pyongyang under any circumstances, will it?"

"China, for example, sharply restricted the export of Korean coal to China. Reasons behind it can be different - from poor quality coal to efforts to make the North Koreans listen to China."

"Will Beijing do the bidding of Washington?"

"It will never do it, it has never done it before - there is no such example in the past 30 years at least, and it will not happen in the future, because China's role in the world has been growing steadily."