Will US visa restriction halt terrorists? 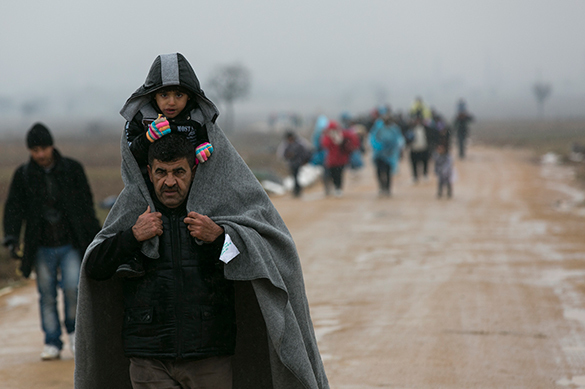 Just about everyone was curious as to what President Trump would do in his first 100 days. Many critiques have been made in the press and talk programs all over the world. Following his inauguration ceremony, President Trump initiated his presidency by immediately signing several executive orders one of which is a suspension of visas from seven Muslims countries. This limitation has become one of the most criticized and disputed executive orders. Messages of denunciations have come from European leaders and Republican lawmakers while Americans flooded into the streets to hold protests.

Even critics arose from within President Trump's own administration and more than 100 people in the State Department signed a dissenting memo opposing this order, claiming that it would increase anti-American sentiment instead of building bridges with societies. Also, Attorney Generals from 16 states announced a joint declaration denouncing this executive order as unlawful. Recently, a federal appeals court has blocked the travel ban from going into effect. Consequently, President Trump stated in a press conference held last Thursday that his administration plans to prepare a revised version next week.

To assess this move from President Trump's perspective, it is best to go back to review his relevant rhetoric during his presidential campaign as he had always emphasized the safety of the American people. Given the global terrorist threat, he is taking some tough actions until improved vetting procedures can be implemented by the administration in terms of counter-terrorism. However, this decision has provoked a backlash both within the States and abroad. He probably does not want to walk back on the things he promised during his campaign but he needs to take into consideration the fair criticisms and opinions of those who are victims of this act. Reneging to a degree on this order does not mean that he would not be keeping his promises. On the contrary, it will gain the trust of the Americans along with the Muslims who are substantially affected by this decision. For example, it was a wise step for the U.S. administration to renege on some parts of the order by exempting travelers possessing a green card. Also as protests escalated, Trump issued a written statement declaring that it is not a Muslim ban but a temporary travel restriction, and blamed the media for false reporting. He also indicated his compassion for those afflicted by the civil war in Syria: "I have tremendous feeling for the people involved in this horrific humanitarian crisis in Syria... My first priority will always be to protect and serve our country, but as president, I will find ways to help all those who are suffering."

This move is undoubtedly causing an unnecessary reaction and also attrition to his team in the first days for the Trump administration. Even though he is issuing statements defending his decision, the duration for the postponement of entry is far too long to wait to make until a settlement in regulations is decided. He should minimize the suspension to 15 or 20 days at most. Moreover, through a well-organized and a more rigorous vetting process, the threat of terror can be reduced.

Within the scope of this executive order, while there is a temporary halt for refugee processing, there is a definitive barring for refugees from Syria. Therefore, this decision should be reassessed since the refugees already go through strict supervision by medical doctors, psychologists and police officers before entering the country. These officials can determine whether Syrians seeking refugee status are affiliated with terrorist organizations or not.

In a testimony at a Senate Homeland Security Committee hearing in November 2015, Anne Richard, a senior US State Department official, said that any Syrian refugee is scrutinized by officials from the National Counterterrorism Center, FBI, Department of Homeland Security, State Department and Pentagon. It is worthwhile to mention that the investigation process for the refugees who get the most scrutiny takes two or more years to be completed.

President Trump's statement favoring Christians over Muslims for refugee assignment did not bring joy to most of the Christian community. Many Christian leaders denounced this ban for closing the door to those most in need. One of the Christian leaders opposing this discrimination was Bishop Joe S. Vásquez who said, "We believe in assisting all, regardless of their religious beliefs".

This temporary ban or the building of walls isn't an effective way to repel terrorism. Among Muslims there are those who love Americans and respect other faiths. What the world expects from America is to take sensible steps while taking precautions against terrorism. When we take into consideration the terror statistics in the US, the attacks related to immigrants are very rare:

Virtually all the deaths from immigrant attacks (98.6 percent) came from one event: 9/11. Other than that, fatal immigrant-linked terrorist attacks in the US were vanishingly rare. The average likelihood of an American being killed in a terrorist attack in which an immigrant participated in any given year is one in 3.6 million -even including the 9/11 deaths.

Additionally, according to data put forth by the Cato Institute, between 1975 and 2015 there have been no American deaths on US soil by any foreign terrorists from the seven Muslim countries listed by the executive order. I believe it is essential to mention that there are 3.3 million Muslims in the United States and they are largely middle-class and well educated who are integrated as part of the American society. They are taking positions in a wide variety of jobs as college teachers, officers, doctors, politicians and so forth. According to Pentagon, as of 2012, there were 3,600 Muslims on active duty in the US military.

Instead of taking such strict measures, the US administration can be more effective in combatting terrorism by focusing on its main cause, which is its ideology. In line with this target, an intellectual campaign should be initiated urgently through an alliance between the US administration and sincere Muslims. The US should be in cooperation with Muslim religious leaders, academicians who can refute the erroneous ideology of terrorism and with those who believe in goodness of humanity. Such alliances will benefit both the Trump administration and eliminate the global terror threat.