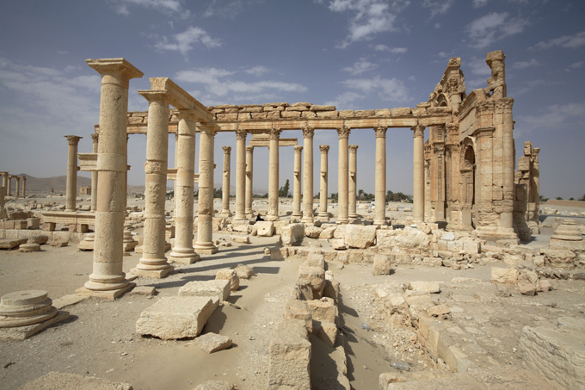 Having laid the foundation of a strong alliance today, Turkey and Russia are two nations that were subjected to invasions and suffered greatly in the 20th Century. They have lost millions of people to these invasions. For this reason, these two nations know the meaning of "foreign invasion" very well. Hence, they are ever vigilant against all open and secret threats.

Turkey's coup attempt of July 15th alarmed the leaders of these two countries, particularly the President Putin and President Erdoğan. Both Kremlin and Ankara realized that they were under attack from a nameless source and hence laid the foundation of a large-scale alliance against those who organized these attacks. There are reports stating that some other countries in the region want to join the alliance too.  It seems that 2017 will witness the foundation of a regional alliance following the initiation of Russia and Turkey.

The reason for the vigilance of the Russian and Turkish administrators against invasion can be easily seen when we look at the history of these two nations.

First, let us look at Russia.

Russia was invaded by Nazi Germany in the Second World War. Merely two years before the Operation Barbarossa, which started in June 22nd, 1941, these two countries signed a non-aggression pact called "Molotov-Ribbentrop Pact". However, Germany did not stand by its word and sign. Hitler's Army Group North started marching towards Leningrad over Baltic States. Army Group Center, on the other hand, attacked Brest-Litovsk and Minsk through Poland. German forces did not stop until they reached Moscow. As for the Army Group South, they attacked Galicia, and advanced towards Stalingrad through Ukraine. It was impossible to form a geographic defense line on these access points. The Soviet Union failed to form a defense line. Three big Russian cities, Leningrad, Stalingrad and Moscow were completely surrounded. More than 10 million Russian citizens gave their lives to remove Germans from Russian territory.  During this great loss of Russian nation, the allied nations, under the leadership of Britain, left Russia alone despite their declarations of support.

For the invasion, Germany used the eastern borders of Russia during the Barbarossa Operation. Today, there is  concentrated NATO activity on the same line. The massing NATO forces in the region worry Russian officials and drive them to take measures.

Similar to Barbarossa Operation, NATO has increased their military presence in the Baltic and Scandinavian countries. NATO deployed new military forces to  EU member countries Estonia, Latvia and Lithuania, and it is trying to recruit Sweden and Finland into the union. Russia considers the possible membership of Sweden in NATO as an imminent threat.

For NATO and its two big member countries, the US and Britain, Russia is responsible for NATO's  new strategy. Speaking at a meeting in the White House where the leaders of Sweden, Denmark, Finland, Norway and Iceland attended, US President Barack Obama tried to shift  responsibility onto Russia by saying, "We have common worries about the increasing aggressive military presence of Russia in the Baltic and Scandinavian regions."

Military activity has started in Poland and its southern neighbor Slovakia. Assembling a military force of 30,000 for NATO in Poland is currently under debate. A10 Thunderbolts, which are the most powerful air-to-ground combat aircrafts, are deployed in Slovakia. The main feature of these aircrafts is their extremely powerful anti-armor and anti-tank weaponry. Russia thinks that these planes are deployed there for a possible invasion of its country.

As a result of Ukraine's de facto separation, and the fact that one part of it is allied with NATO while the other part with Russia, there is no buffer zone remaining between Russian border and NATO forces in the Baltic region.

In addition to this, the assembled 35.000 militia force in Poland and the deployed air defense systems in Poland and Romania have caused the crisis to intensify. When we assess all this information as a whole, it can be seen that these efforts are designed to subject Russia to a military blockade.

When we turn our eyes to south, we can see that NATO is taking action to ensure zone control in the Black Sea. For example, a NATO fleet is offered to be deployed to the port of Odessa in Ukraine. Indeed, NATO started to carry out one military exercises after another in the Black Sea. Romania and Bulgaria, two other countries that also have a coast on the Black Sea, participated in these NATO military exercises too. In the face of these developments, Russia was forced to deploy S-300 and S-400 air defense systems in the Crimean region as a defense against a possible attack from south.

These military developments, which aim to force Russia into a corner, are supported by some media outlets through activities that distort perceptions. It is a widely known fact that the Western press regularly portrays Russia as an aggressive country that tries to bully its neighbors.

Russia is not entirely wrong in perceiving NATO's actions as a similar instance of Operation Barbarossa and thinking that it is being surrounded.  If Turkey's coup attempt of July 15th had been successful, probably Turkey too could have been forced into an anti-Russia foreign policy. Whereas, Turkey is a country that loves the Russian nation and always assumed a friendly approach towards them as principle. God spared these two countries.

Turkey experienced a similar invasion after the First World War. The Ottoman Empire's territory was divvied up in the secret Sykes-Picot Agreement. According to this agreement, Britain invaded Mosul, Kirkuk, Erbil and the Sulaymaniyah regions in northern Iraq while French forces penetrated the Gaziantep and Maraş regions in Anatolia. Italians, on the other hand, invaded Antalya and the Western Mediterranean while Greece started the Aegean invasion by occupying Izmir.  Turkish capital was invaded too and Istanbul came under the control of British forces.

The fact that Turkey is under the threat of a similar invasion became painfully apparent after the coup attempt of July 15th. It was then evident that Anatolia is surrounded by forces poised for invasion. The PKK's preparations were complete in Northern Iraq and Southeastern of Turkey.  At the night of the failed coup, the PYD and all other foreign military forces acting with it were deployed to the border in Gaziantep and Maraş regions. This line was the access point of French forces to the Anatolia in 1920. Tens of thousands of S.A.S forces situated in the British base in Cyprus were ready to invade Antalya and Eastern Mediterranean regions during the post-coup tumult. Same territory was occupied by Italian forces in 1920.

During the night of the coup , a fleet comprised of 24 NATO ships was carrying out military exercises in the Black Sea. Hours would have sufficed for them to surround and bombard Istanbul, had they found the appropriate opportunity. Just as it was in Turkish War for Independence, certain treacherous groups of coup supporters, disguised as Turkish soldiers, were ready to attack our army from within. Pro-coup generals in Southeast pulled border forces back to leave the borders vulnerable for infiltration. Tens of thousands of foreign soldiers situated in the aircraft carriers in Eastern Mediterranean were ready to conduct a landing operation at any moment.

Even though the coup was staved off, the danger of invasion is still present. With the Mosul operation, tens of thousands of additional foreign troops were deployed in Iraq. The presence of these forces in Iraq poses a threat for both Turkey and its allies in the region, the Barzani government and the local peoples. In case of an invasion attempt, these troops are at a strategic point that will allow them to quickly attack the Turkish borders.

The cause of the wars that has been ongoing in the Middle East for a century is the decision taken in the Cairo conference of 1921. In the Cairo conference, the 40 representatives of  British imperialism drew up the new borders of the Middle East without bothering to consult the people who lived there. The chairman of the conference, Winston Churchill, dubbed the participants as "Forty Thieves". Among those dubbed as "thieves" by Churchill, there were the British spies, Gerthrude Bell and T.E. Lawrence, their local associates Jafar al-Askari and Sassoon Hasqauil, the British invasion commanders General Edmund Allenby, Marshal Sir Hugh Trenchard, Hubert Young, and the British Invasion Civil Administrators Herbert Samuel, Sir Percy Cox, Francis Archer and Arnold Wilson. The borders were drawn by taking British interests into consideration rather than the interests of the people of the region. Now, similar circles are once again devising new borders at the expense of the people of the region. Today, the time has come to abandon this thievish mentality. The world has suffered terribly for 200 hundred years at the hands of this inhumane mentality spreading sedition and disorder on earth. Laying a military siege on Russia and driving it into a corner will not benefit the world in any way, shape or form. New borders, land mines or barbed wires are not what the people of the region need; what they need is friendship and brotherhood. In conclusion, the alliance of Turkey and Russia should form the core of this alliance of friendship that will protect the region, the world and the innocent.