Ukraine wants to undermine the Russian world and reprogram Russia

Ukraine intends to reprogram the Russian world in a European fashion. Ukraine will be implementing the plan, inter alia, with the help of Russian students, who will be given an opportunity to study in Ukraine. The plan sounds nonsensical at first glance. What if we take a closer look at it? 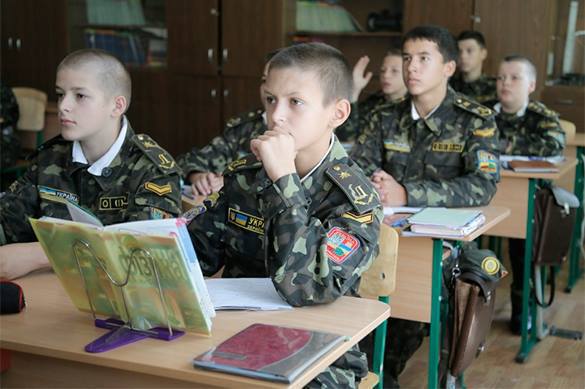 "Ukraine has to take on a mission to retell Russian culture and literature in a modern European language," a member of the team of Odessa governor Mikheil Saakashvili, former editor of Forbes Ukraine, Vladimir Fedorin said. According to him, the Russian culture "in the form, in which it was nationalized by the Russian Federation, serves as a justification for an extremely dangerous view of the world." "Ukraine could play a positive role in reprogramming the Russian culture by simply retelling the imperial culture in a modern, adult European language," Fedorin said, Politnavigator website reports. "Perhaps, as I suggested 18 months ago, it makes sense to attract students from Russia to Ukraine to show them a modern European look at the Russian culture and literature. If we want to come to peace with Russia, I do not think that we will reach anything without reprogramming this," the official said.

In the team of former Georgian President Saakashvili, Mr. Fedorin swims like a fish in the sea. However, a closer look suggest that Mr. Fedorin aims to undermine the Russian national idea - the Russian world.

At first, Ukraine will take efforts to destroy all vestiges of the Russian world on its territory.  According to Ukraine's new history, Ukraine has been at war with Russia since 1918, and it was the troops of Stepan Bandera and Shukhevich that rescued Ukraine from the "Soviet-Nazi occupation." Ukraine will shelve all Russian literature in a closet together with the Russian language.The Ministry for Education of Ukraine has obliged its employees to speak only Ukrainian while performing their official duties.

The parishes of the Russian Orthodox Church of the Moscow Patriarchate will be transformed into "Ukrainian" ones at all costs. Not that long ago, gunners of the Kiev Patriarchate forcefully obtained two plots of land for the construction of churches. The churches will be built for those who only start going to school. The Russians will have no opportunity to claim their rights for anything. Russians in Ukraine will be made non-citizens and deprived of election rights. "Sub-Ukrainians" will be told that they have to work for Ukraine keeping in mind their "inferiority."

Mr. Fedorin's plan may fail for one simple reason. If it turns out that the entire Ukrainian national project does not ensure the transition of Russian cultural space into Western cultural space, all Ukrainians will turn away from "Ukrainianness," excluding Galicia. Subconsciously, the majority of Ukrainians are not Westerners, but Orthodox people.

Students - the main weapon of Kiev

As for the reprogramming of Russia with the help of Russian students who come to Ukraine to study there, this could be possible. The USA has used this technique before to conquer the elites of the former Eastern European bloc.

Russia will never be able to live in harmony with the West because of the US model of a melting pot of nations, in which they melt to create an "exceptional product." Russia has always been trying to build a common house, where national identity does not interfere with common Russian-ness. The Russian world can co-exist with the American world, but the American world cannot co-exist with the Russian one. The idea of Ukrainianness is an idea of a melting pot. Is it too late for Russia to rescue the Russians in Ukraine? What kind of people will they become in ten years?